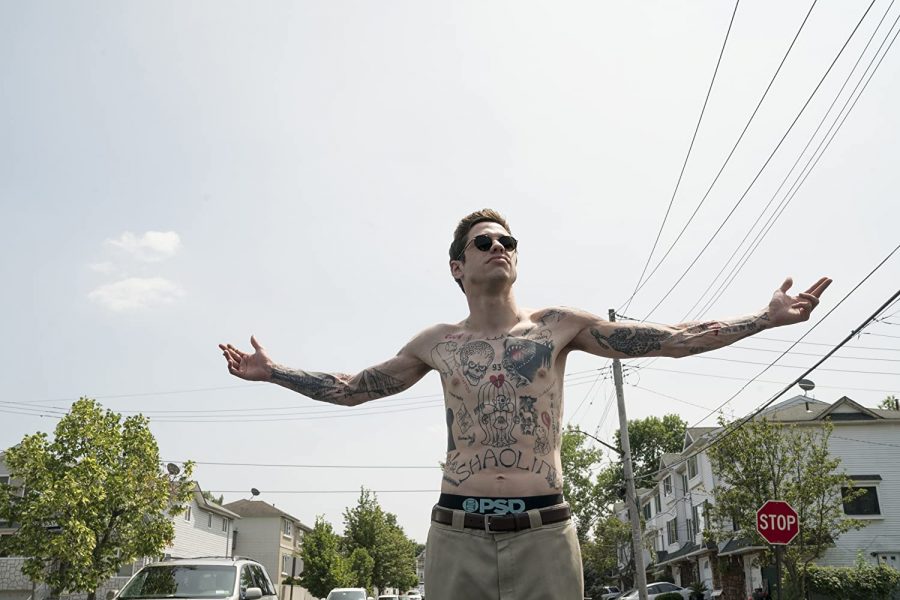 The King of Staten Island, starring Pete Davidson, is set to release on June 12.

With the premiere of his movie “The King of Staten Island” approaching on June 12, releasing on demand, director and writer Judd Apatow sat down for a virtual roundtable with college newspapers from across the country on June 1.

Davidson’s father, firefighter Scott Davidson, passed away when responding to the World Trade Center attack in 2001. The movie explores the ways in which Scott copes with losing his father at a young age and a number of decisions that dig into a deeper and mentally depressing hole.

Apatow has successfully directed and written productions that blend social issues such as mental health seamlessly with comedy. Davidson’s character feels like life cheated him out of growing up with his father. Scott is comparable to a lot of millennials and the Gen-Z population. When other people around him attempt to bring him up, he naturally pulls himself back down.

The entirety of the movie is shot and based in Staten Island. A native to Long Island, New York, Apatow felt at home filming in the lost borough for the first time since the early ’80s. The borough created an authentic and visible theme throughout the film, encapsulating the tone, accents, and even real-life locations such as the famous pizzeria, Denino’s.

“There’s this certain vibe to Staten Island that is not like the other boroughs, it’s not like anywhere else in the country,” Apatow said. “It’s a bit of a strange place, because there’s nothing there that would make anyone visit if you didn’t have friends or family there.”

Davidson accompanied Apatow and the production design team during location scouting, pointing out landmarks and shooting locations that he resonated and felt was authentic to the borough.

“It’s almost like a land without visitors and the people who live there don’t leave a ton and go to Manhattan in a surprising way,” Apatow said. “It is its own bubble and its own culture. We felt that if we shoot the entire movie there, then maybe we’d get a truthful look into what it feels like to live there.”

“The King of Staten Island” is unique in that it is one of the few movies that star the actor that the film is based upon. Apatow is known for telling the stories of characters who are stuck in a rut due to the continuous negative choices they make. All three writers, Apatow, Davidson and Dave Sirus outlined for months, crafting this fictional world that created elements from Pete’s real-life that could further inspire the story and other characters.

“It only worked because Pete was so brave to share it all with us,” Apatow said. “We were trying to make a fictional movie that was emotionally truthful. So even though most of the movie is made up and didn’t happen, when it was over, you would feel like you really got to know Pete.”

Sacrifice is a prominent theme throughout the film. In the second act, Pete’s character is introduced to the firefighters and firehouse that hold key information and experiences about his father. Terry Quinn, who worked alongside FDNY member John Sorrentino, was a close friend to Pete’s father when they worked in Brooklyn Heights together. Quinn worked as a consultant for the film, ensuring the authenticity of the men and women who protect the city. Sorrentino also accompanied Apatow and Davidson on a day in the life experience of a firefighter during the filming of the movie.

“I said to one of the firefighters once, ‘Is most of it boring? Is most of it like a pain? You get sent to someone’s house to get their cat or somebody fell or something like that.’ And he said, ‘I know this sounds corny but we just really like helping people,’” Apatow said.

Few films attempt to address the service-minded individuals in our community that protect and serve us. The lack of attention these men and women in service receive was a motivating factor to Apatow when piecing the film together.

“We all move through the world and we just assume these people will help us, but we don’t really think much about them. They’re just there, I think they’re taken for granted most of the time, but yet if you call a firefighter right now, they’ll run into your burning house,” Apatow said.

The struggles of today’s generation continues to inspire the unique subject matter of Apatow’s catalog. Social media is a platform that Apatow didn’t have to grapple with as a young comedian and director. These stark comparisons sparked an interesting dialogue between Apatow and Davidson’s respective upbringings.

“What I talk about with Pete a lot is that when I was first starting, I was a kid and I lived with Adam Sandler in an apartment and we were in our early 20’s and no one paid any attention to us. There was no internet that we knew about and we were trying to learn how to be comedians and we were young people wandering around the world with no one tracking us, nobody judging us, we didn’t know what anyone else was doing. And I think it was a much less stressful young person’s life than what it is now where everyone in a way is starring in their own Instagram tv show,” Apatow said.

Apatow hopes that the complexities of each character’s relationship with the next as well as their individual struggles resonates with viewers. These societal issues seem to pop up in each of Apatow’s films, exploring the human struggle as both darkly reflective and comedic.

“Personally, I think everybody’s a lost soul. Everybody in the world is just trying to get through the day; make their life work, make their relationships work, be good parents or be good kids or good friends and that that’s very difficult a lot of the time. I have a lot of compassion for the basic human struggle, but I think it’s also very funny,” Apatow said.