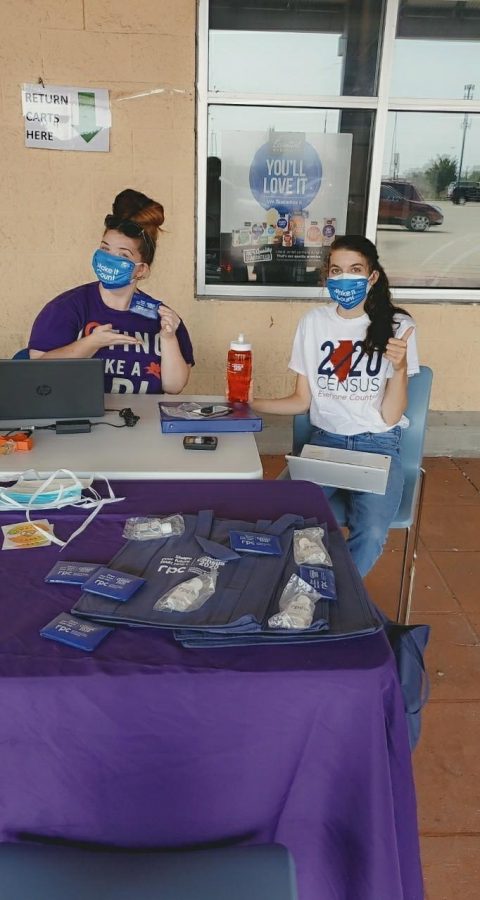 Jessica Black and Audrey Dombro wait to assist local residents in getting counted in the Census on August 25. The recent MCORE public transportation project was able to happen because of accurate Census data.

Every 10 years, the U.S. Government assesses the population of the country with the census. This data then helps decide the quantity and quality of a number of critical government services. It determines political representation at the national, state and county levels and assesses the funding for social services, healthcare and infrastructure.

While census counters already face a challenge in getting people to participate, those who work in Champaign-Urbana have additional difficulties. College students make up a considerable percentage of the cities’ population, which means that Champaign County encourages students to fill out the census with their campus address.

Several students, though, will either list their home address on their census form or they will be counted by their parents at home. This case was exacerbated by the pandemic this year when all of the students left campus right as the census form was opening.

Audrey Dombro, a recent graduate of ACES, works for the Champaign County Region Outreach Commission trying to make sure people, particularly college students, are being counted.

“It’s been intensive tabling events, reaching out to all kinds of local organizations to connect with them and basically showing up wherever something is happening,” Dombro said. “My job is to show up when those are happening and make sure that the people there are being counted.

Dombro understands how critical an accurate census count is for communities. She said an undercount could mean losing representation in Washington D.C. It could also mean losing funding for health clinics, Supplemental Nutrition Assitance Programs and public infrastructure.

When speaking with the community, Dombro tries to communicate how big an impact one can have by simply filling out basic information on the website.

“That is a big step towards stronger, better-funded communities, and we cannot risk an undercount because of what we will lose,” she said.

Gabe Lewis is a planner for the Champaign County Regional Planning Commission, which handles census data. Last year, the CCRPC convened the Champaign County Complete Count Committee, which gathered 20 agencies together, each dedicated to gathering a complete 2020 census count.

Lewis and the others in the committee have been working to educate the community and get people counted.

“It’s estimated that every person in Illinois who does not get counted means that we’re losing $1,400 per year,” Lewis said. “It tells the federal government how many people are living here, and that affects how much federal funding comes back to Champaign County.”

This can also be of particular interest to college students Lewis said. Students spend the majority of their year on campus. Census data that reflects this information means that the county has more resources to improve campus as well.

Lewis specifically mentioned the Multimodal Corridor Enhancement project that helped improve transportation around campus. He said that project was able to occur because of accurate census data stating how many people lived in the community.

Another important benefit of accurate census data for students is the federal funding for student loans and grants as well as other student services. A complete count helps identify how much funding is necessary.

The community outreach has been going well, according to Lewis.

“We’ve had good interactions,” he said. “People are willing to fill out the form even if they don’t understand what they need to answer. We’re there to help them. You give more information to Facebook.”

Lewis has helped coordinate a number of ways to reach ou to the community and students in particular. Booths are set up at Washington Park almost every Thursday and Friday afternoon and midday on Saturday. They are also set up at Neutral Cycle and Brew Lab on Wednesday and Saturday afternoons to help anyone fill out their forms.

Edgar Cuevas, senior in LAS, filled out his census form with his campus address this year. He also mentioned the significance of having accurate census information.

“I think that the census is very important for getting a good idea of what the population demographic is,” Cuevas said.

Cuevas knows that some are hesitant to give their information to the census, though. He said he believes there is mistrust between the government and its people regarding how they will use this information.

“I think that there should be a way to encourage more government trust which I know is a difficult thing to arrange since a lot of people distrust the government,” he said.

Dombro said, in her experience, once she has the chance to talk with people and share information, they are more willing to participate in the census.

“The last month working in this capacity has really made me feel a lot more connected to my community,” she said. “I’ve seen how much people really care and how far they’re willing to go for their community.