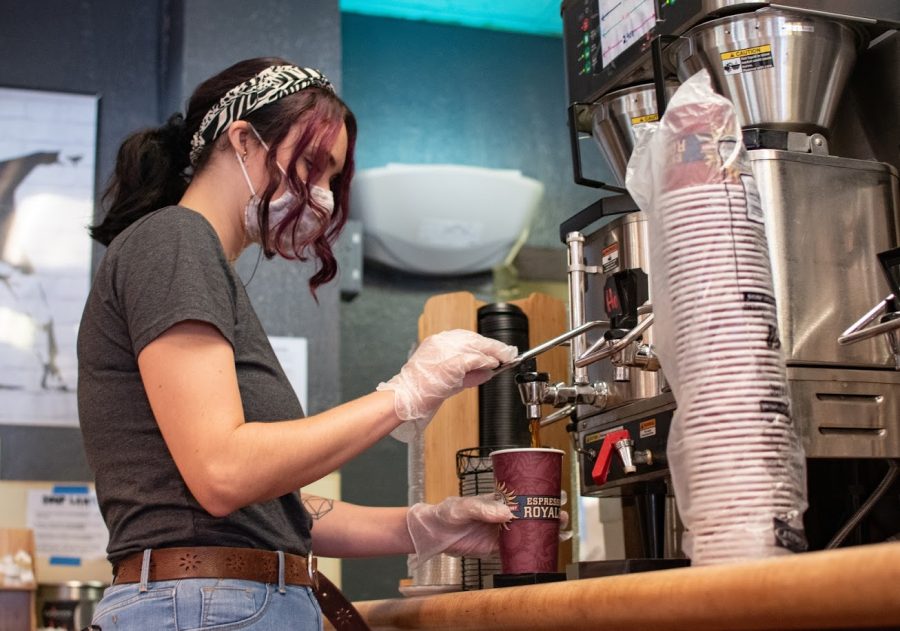 Amidst a slew of COVID-19-induced business closures, the farewell of one local favorite hit hard for the campus community. The announcement came months after what was supposed to be a temporary shutdown that began during spring break.

“Sadly, our company has not survived the coronavirus pandemic,” Espresso Royale, LLC said in a statement from June 11.

Assistant manager Anika Nims was working a quiet closing shift when she got word of the initial closure back in March.

“My manager just texted me one day while I was closing and was like, ‘Hey, throw away everything in the store. We’re going to be closed,’ Nims recalled. “I had a complete emotional breakdown.”

By June 11, Nims had adjusted to unemployed life in quarantine. So when she received a text asking if she could return to work, she said she felt both hesitation and relief. The fact that the text came just hours after Espresso Royale’s announcement of permanent closure added a thick layer of confusion.

Unbeknownst to Nims, her coworkers and forlorn Espresso regulars, a plan of recourse was in motion. A small local group of Espresso higher-ups had pulled together to reclaim and reopen the Champaign-Urbana cafes under Espresso Royale C-U (ERC-U) — independent from the greater Michigan-owned Espresso Royale, LLC. While locations in Michigan and Wisconsin said their final goodbyes, C-U’s stores on Oregon Street, Neil Street, and Village Green at the Crossing came back to life.

“It wasn’t a difficult decision,” McCarver said. “I knew the stores were great, and that they deserved another life.”

McCarver’s relationship with Espresso Royale began in the early ‘90s. He was a University student living in Allen Hall — a five-minute walk from the Espresso on Oregon Street he would grow to love and then to join as a pioneering team member.

He spent three years in Madison helping the company break ground in Wisconsin, then returned to C-U to open a shop on Sixth and Daniel streets — a cozy little spot that was just demolished in summer 2019. Several more locations sprouted up under McCarver’s management, each of which he treasured as a part of his journey.

“I didn’t want to see them go,” McCarver said. “I had such a long personal history with each location.”

McCarver recognized that Espresso Royale meant as much to its regular visitors as it did to him. The coffee shops have built up loyal patronage during their three decades of service.

For Mackenzie Schabowski, senior in LAS, Espresso Royale was a daily ritual.

“Espresso became something I felt like I lived on,” Schabowski said. “It was a comfort to me. As time went on, I began to frequent the Oregon Street location more and more. It’s a safe space.”

Kevin Zhagui, a senior in ACES, found a home at the Undergraduate Library location.

“I’ve spent so many days and nights studying there that a good chunk of my life was just sitting, relaxing having a coffee or croissant before I had to work again,” Zhagui said.

While the stores’ return was cause for celebration in the community, the reopened ERC-Us were, by some metrics, hardly recognizable from their pre-pandemic days. For-here service was suspended at all locations, along with public bathrooms and cash payment. Nims found herself regularly prompting customers to mask up.

Keeping business alive during the coronavirus required near overhaul of normal protocol.

“That’s kind of what we do,” McCarver said. “We get a challenge, and we come up with a solution, and then we make it happen.”

As temperatures start to dip below outdoor seating weather, Espresso Royale C-U faces new challenges on the horizon. The first winter in the pandemic will be a brutal test for already struggling local businesses.

McCarver looks to the company’s future with optimism. He felt inspired seeing employees come back to work despite the risk — employees like Nims, who continues to serve customers during a pandemic the same way she has for the past six years.

With such faith from its supporters, McCarver said he is certain that Espresso Royale C-U stands a chance.

“There is something to be said about those early pioneers, those brave people who actually came back and are still around,” he said. “Those people are doing it not for any reason other than that they just really believe in keeping the stores alive.”

Editor’s Note: An earlier version of this story incorrectly reported a source to be in Business instead of ACES. The Daily Illini regrets this error.