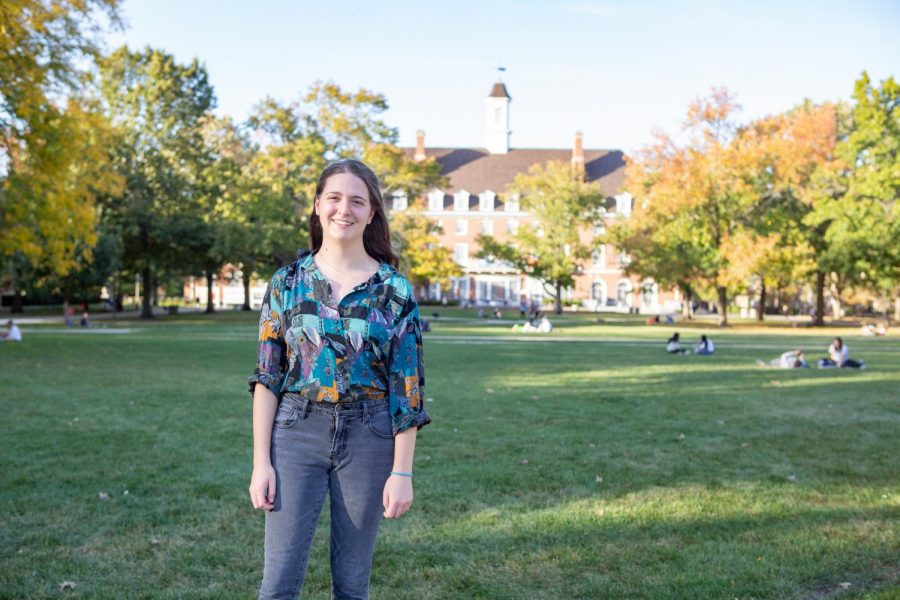 Senior Katrina Rbeiz poses for a photo on the Main Quad on Wednesday afternoon. Rbeiz is a third culture kid.

The culture one comes from shapes many of one’s childhood experiences and one’s sense of belonging. For some kids, it can be difficult to come to terms with the diverse puzzle pieces of identity. For third culture kids, it’s natural to view their identity as a set of interconnected pieces.

“Third culture kids,” a term coined in 1950, represents individuals raised in a cultural environment other than with their parents while also living in a different environment for the majority of their developmental years.

Katrina Rbeiz, a senior in LAS, is a third culture kid. While the cultures she interacts with are so distinct, Rbeiz personally feels the influence of every one of them. Rbeiz is half American and half Lebanese. She realized she was a third culture kid after seeing how different her nationality was from those she saw when she lived in the Middle East.

She was always interested in learning more about that in-between group, focusing on what she said was the “adaptability of third culture kids and how they made new belongingness” and “attachment to [their] home country as well as people they meet.”

Initially a psychology major, Rbeiz realized she had a connection to cultural aspects of her life and wanted to keep the global aspect after living abroad. So she chose to double major in global studies, which led to studying abroad in Vienna for a semester and pursuing research at Cambridge University in the summer of her sophomore year.

Her research gave her avenues to pursue her identity further, and the satisfaction of “knowing that [she’s] not alone in the struggles that [she] may have faced in third culture kid-specific issues,” she said.

Knowing that those struggles didn’t only affect her helped her make significant realizations about what third culture kids face.

“[Third culture kids] lives are constantly shaped by new cultures, environments and new habits, like new norms and societal rules that come from other cultures,” Rbeiz said. “I liked learning about different people’s perspectives and what they valued in their relationships, and what struggles they went through when they moved around a lot.”

Tian grew up in northeastern China. Given the close proximity to Russia and North Korea, she got to interact with those cultures including Korean minorities in her city. She then moved to Chicago for middle school, and then to a homogeneous suburb to complete high school.

Spending her childhood in China and her teenage years in the U.S. gave Tian a unique perspective on local culture.

“I feel like my thoughts are more ‘Americanized’ compared to international college Chinese students, but less ‘Americanized’ than the Chinese kids who were born and raised here,” said Tian. “So that’s affecting my belongingness because I wasn’t able to find my own groups.”

However, Tian said she’s recently been exploring her cultural identity on her own and read about the Chinese revolution in the 1960s from multiple perspectives.

Through this diverse exploration, she noticed the differences between the two cultures.

“[The Chinese authors] teach you what happened but they don’t teach you how ugly it was,” said Tian. “But being multicultural and multilingual, I was able to learn that history in English books through American authors’ point of view.”

Tian said she thought American authors were more focused on “conceptual” elements, but the Chinese authors went further into day-to-day life. Based on this insight, Tian recommends reading books in free time to explore one’s identity if they choose to go further to discover it themselves.

“I feel like books are the best resources to understand the history and the cultural background,” said Tian. “It’s great to see history in the past because history reflects current life and maybe even the future.”

Maha Syed, sophomore in LAS, also pursues research for the benefit of other multicultural students.

“I knew I wanted to do something along the lines psychology and social justice, and culture just kind of weaved into there,” Syed said. “Then I found, like, this research lab that basically had this idea of a sense of belonging and was trying to figure out how different demographics understand or feel this idea.”

Syed started working on a project called “belonging and late-life,” where she focused on a population of 65 years and above and how their sense of belonging changed overtime over many demographics.

In the future, Syed said she envisioned her research being published and well-rounded. She likes the idea of “working alongside more grad students and just working on more different projects, just so [she] can get more of a wholesome perspective on research.”