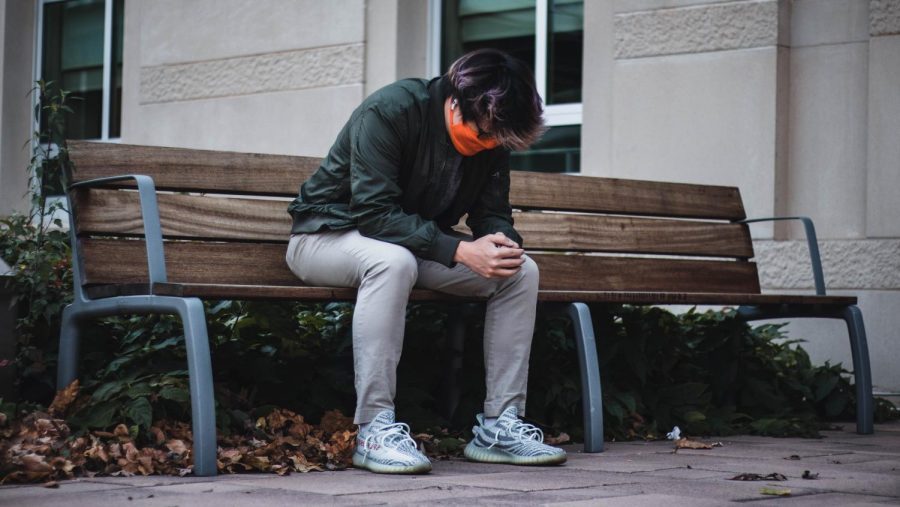 Bryan Kang, sophomore in Business, sits on a bench outside Wassaja Hall on Sunday afternoon. Many students considered taking a gap year this fall due to the COVID-19 pandemic.

Every student at the University of Illinois takes a different path to their degree. The school takes pride in its diverse student body, whether students are coming from the bustling streets of Chicago, the quiet ambiance of small-town Ohio, the crowded highrises of Singapore or just two miles north of Champaign Central High School. As fall approached this year, though, one question united the student body: Would it be smart to go to campus amidst a pandemic?

For some students, the idea of taking a gap year became very attractive.

The COVID-19 pandemic led to a near 300% increase in gap years for incoming University of Pennsylvania students, while 20% of Harvard first-year students are opting to defer their admission this school year. While it varied from school to school, overall, more students are opting to take a gap year than in the years before.

Isaiah Soto, senior in ACES, explained in an email why he decided to take a gap semester this year.

“Basically, I realized last semester that having all my classes online was super demotivating, and I ended up having a lot of mental health issues just being holed up in my apartment by myself for three months,” Soto said. “During the summer I took classes too, but the problem still persisted, and I realized that if I wanted to do the best that I could in school that I would be better off taking some time to hope that things would get better by next spring.”

Soto said the University’s hiring of full-time workers at the COVID-19 testing sites around campus helped him with this decision, as it provided him a means for which to pay rent. He has an apartment on campus where he lives with his friends to combat the isolation he felt at the end of last semester.

Some of Soto’s coworkers and friends have also shifted to being part-time students or taking gap semesters. Their reasonings range from concern about virtual classes to financial considerations.

“The general reasoning is mainly that it’s really hard to stay organized and motivated with online classes, and it feels like a waste of money to pay so much just to deal with lots of technical difficulties, online exams and worrying about quarantining,” Soto said.

Soto’s comments reiterated the fear of not just COVID-19 on campus, but also the already taxing college life-work balance on top of it. Many students have expressed their frustrations with “Zoom University,” as some Redditors have mocked the online offerings of major universities.

A petition has been circulating with more than 700 signatures to ban “Proctorio,” the online cheating-prevention system, from the University. With the closure of local businesses, the stress of new online courses and everything else that has changed about life on campus, students have many reasons driving them to hit the pause button.

For some, though, gap years or gap semesters were not the right option. Caleb Berry, freshman in Business, gave a short and simple reasoning for staying on campus this fall.

“I wanted to come to campus to experience college and get out of my comfort zone,” Berry said. “A gap year never crossed my mind. I have always been set on continuing my education through college right after high school.”

Benjamin Arango Navar, freshman in LAS, came to campus this year and expressed the reasoning for his decision.

“It was a tough decision since we could have saved quite a bit of money, but my mother and I agreed that if I went to college, then I would mature a lot and be more independent,” Navar said. “We noticed that kids who do not leave their parents’ houses tend to be less professional and less educated, so I did not want to be one of those people.”

Navar also was unconcerned about the risks of the pandemic on campus, as he said he is very healthy and would likely be at greater risk if he stayed in Chicago. In his mind, Navar said a gap year would not be an option.

“A gap year never crossed my mind because that feels like a wasted opportunity,” Navar said. “I would much rather get everything I need to get done at a younger age, so I could get a good job sooner, make good cash, then live a happy life traveling the world and having fun.”