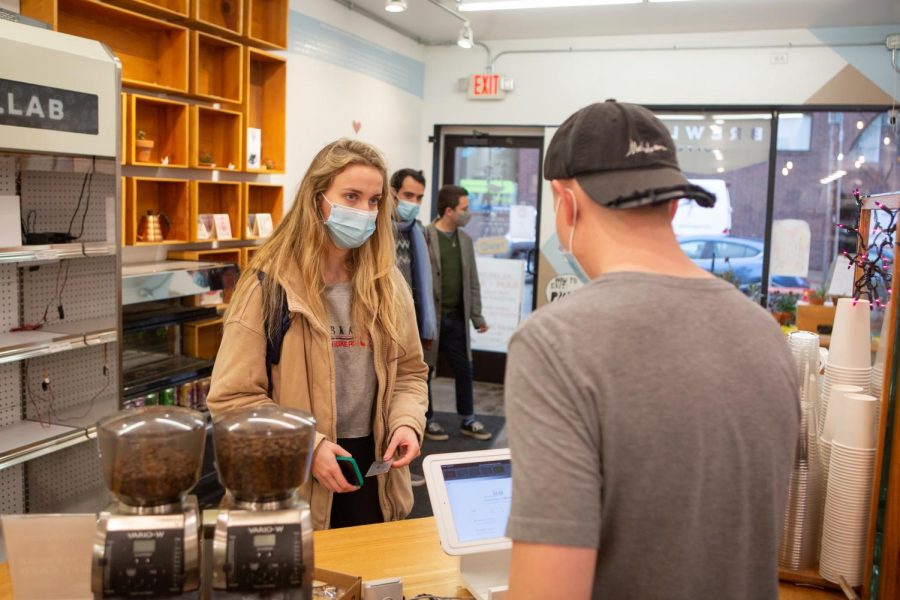 BrewLab General Manager Gab Wikoff serves a customer on Tuesday afternoon. The coffee shop, along with other similar businesses in the area, have had to adapt to the COVID-19 pandemic.

During a typical school year, the campus’ multitude of coffee shops are filled with students studying, hanging out with friends and most importantly, drinking coffee.

However, this isn’t a typical school year. Many of students’ favorite study spots have had to close off or severely limit their indoor seating due to social distancing guidelines instituted by the cities of Champaign or Urbana, leading to a decrease in business. Decreased foot traffic, as well the absence of students from March until the beginning of the school year in August have also factored into the drop in business coffee shops have experienced.

One popular campus coffee shop, BrewLab, has adapted to the new business landscape created by COVID-19.

“At first when COVID shut everything down back in March, it was kind of like a really prolonged summer — no students walking around and coming in, everyone was working from home — so at the beginning of the school year it was really slow,” BrewLab General Manager Gabe Wikoff said. “But recently we’ve had an upturn in business and have been pretty comparable to pre-COVID for the past month. I’m not exactly sure why, maybe people are anxious to get outside and do things.”

BrewLab, located near the corner of Fifth and Green streets in the heart of campus town, had to renovate to accommodate social distancing guidelines. When the pandemic began in March and throughout the summer, the city of Champaign instituted an ordinance requiring all restaurants and cafes to remove or close off their indoor seating. Wikoff decided to convert parking spaces located on the side of the building into outdoor seating, encouraging customers to patronize BrewLab while adhering to social distancing guidelines.

Once students returned back to campus in August, Champaign relaxed their social distancing guidelines, allowing for cafes to reinstitute indoor seating as long as tables were six feet apart. Adapting to requirements set by the city of Champaign has resulted in creative solutions for accommodation.

“One of our bathrooms is full of chairs right now because we’ve had to find the extra room to store our seating because they can only be six feet apart in the cafe,” Wikoff said.

BrewLab was known for hosting specialty coffee tastings and brewing workshops, but have had to cancel all events for the foreseeable future. Still, business is returning close to normal, averaging over 200 customers a day, due in part to their expanded outdoor seating.

Wikoff, who graduated from the University of Illinois in 2019 with a degree in Spanish, plans to advance in the coffee industry and work as a consultant for independent coffee farmers in Central America.

In addition to the pandemic, coffee farmers and the coffee industry as a whole have had to adapt to another pressing concern — climate change.

Coffee can only be grown in locations between latitudes 25 degrees North and 30 degrees South — a location known colloquially as “the coffee belt.” In addition, coffee plants are very respondent to rain patterns. With rain patterns becoming less predictable as the global climate shifts, coffee production in Central America is becoming less economically viable.

Dr. Taya Brown, a researcher at the Center for Coffee Research and Education at Texas A&M University, works as a consultant for independent, family-owned coffee farms in Guatemala. She spent two years living in Guatemala, working directly with coffee farmers, and has spent the last five years traveling between Guatemala and the United States.

“If you have shifting rain patterns, you have a shift in when coffee is coming, so the farmers I work with will tell you the coffee’s coming earlier or later than normal,” Brown said. “It’s sporadic — they don’t always know exactly how the season will go, and that has some economic connotations. Coffee’s like a timebomb that you have to sell quickly, so you’ll have farmers who will sell cherries on the street market to someone who will pay them very little, the farmers don’t have much autonomy in that situation.”

While technological innovations in the coffee industry mean coffee can still be produced under hardening climatological conditions, the main effect of climate change will be on the producers who stake their livelihood on coffee production. According to Brown, coffee farmers in Guatemala only receive roughly 60% of their income from their coffee production and have to support themselves and their families through second streams of income.

Dr. Andrew Margenot, an assistant professor in the Crop Science Department at the University, worked with Dr. Brown during her time in Guatemala. Margenot, who will begin teaching CPSC 117: Agriculture and Science of Coffee, in the spring semester, emphasizes ways students and coffee shops in Champaign-Urbana can help support family-owned coffee farms half the world over.

“Being mindful of where you source your coffee, that’s the best thing,” Margenot said. “Also, I think not buying into a lot of advertising myths is important. There are these myths in the coffee business that if they get perpetuated further, could potentially drive consumer preferences indirectly. Being educated about what is going on in the production areas is important.”