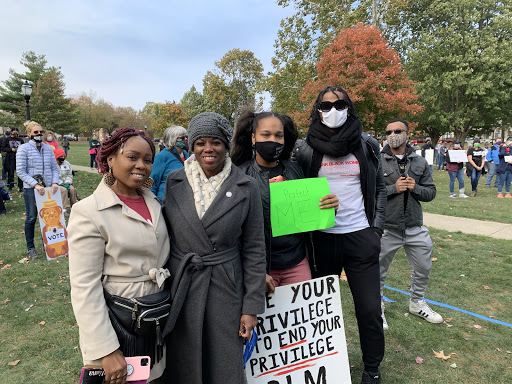 Illinois 103rd State District Representative Carol Ammons poses with supporters at the CU Women’s March and Rally in West Side Park on Saturday.

Seventeen-year-old senior at Champaign Central High School and prospective University of Illinois student Riley Anton was shocked. The grief for the powerful female hero she admired overwhelmed her.

When Anton’s initial shock passed, she was filled with thoughts of dread.

“She has to survive,” Anton said. “The rights of so many people are in her hands.”

Anton’s anguish carried her and her mother to Ginsburg’s funeral in Washington, D.C., and to a rally hosted by Planned Parenthood to empower Ginsburg’s dying wish: not to have President Donald Trump determine her replacement.

Anton explained how the representation Ginsburg provided American women in the Supreme Court remains an impactful legacy. She stressed the importance of female representation at all levels of the government.

“When you’re growing up, it’s really important to have representation,” Anton said. “If (women) do end up winning, or even just their presence will inspire more women to think, ‘this is actually something I can do.’”

Women are represented in many spaces on the Champaign County ballot for the upcoming general election. This year, 18 women will be candidates bidding for office in the county, what the Champaign County Clerk’s Office believes to be the most in history. Four are Republican and 14 are Democratic.

Lisa Burgoon, co-host of the Champaign-Urbana Women’s Rally in March 2020 and retired director of the minor in leadership studies within the University’s College of ACES, said she noticed the disproportion between the female representation of both parties.

Burgoon noted the majority of female candidates coming from the Democratic Party indicated the party’s prioritization of serving American women.

“I think that shows us a lot about the partisanship in the United States and that the platform for the Democratic Party is much more for women’s rights across the spectrum,” Burgoon said.

“The Democratic platform seems to focus much more on ‘how do we care for our general population?’ and it does seem to me that the Republicans are not as concerned about that,” Burgoon said.

The Daily Illini reached out to Illini Republicans and Turning Point USA at the University of Illinois for a comment but received no response.

Carol Ammons, the first black female to serve as the 103rd District State Representative will be running for re-election. She expressed her elation at the local female representation being shown on the ballot for Champaign County. However, Ammons then emphasized the need for further representation of women of color.

“African American women have been striving for equal rights even before there was something called a women’s suffrage movement,” Ammons said. “We want equal representation in every level of government.”

Erin Minor,  freshman in LAS, reinforced Ammons’ comment and stressed the electorate’s need for such representation in the government. She stressed the importance of representative politics.

“There’s this thing called representative politics, and it’s the idea that the best people to represent you in government are the people who are like you because they’re the ones who are best going to understand what your community needs and what your experiences are like,” Minor said.

“That’s why it’s so important to have diversity in the government because you need everybody from different walks of life and all backgrounds to really understand the importance of what individuals of our community need,” she said.

While Burgoon thinks the increase of local female representation on the Champaign County ballot is commendable, she explained the need to vote for these females.

“Women running for office who then get that office might go onto a higher office where eventually policy can be made at that level, so we need to start local and try and get the issues out there,” she said.

For individuals under the age of 18 such as Anton, voting in this general election is not possibile. Anton found other routes to express her political beliefs, though.

Anton said educating oneself and sharing knowledge helps to further the movement for women’s rights and representation.

“Even though I traveled all the way to D.C., you don’t have to do that to be involved,” she said. “Educating yourself and working to educate those around you is important.”

Editor’s Note: The phrasing of a sentenced was corrected to more accurately reflect its meaning. The Daily Illini regrets this error.