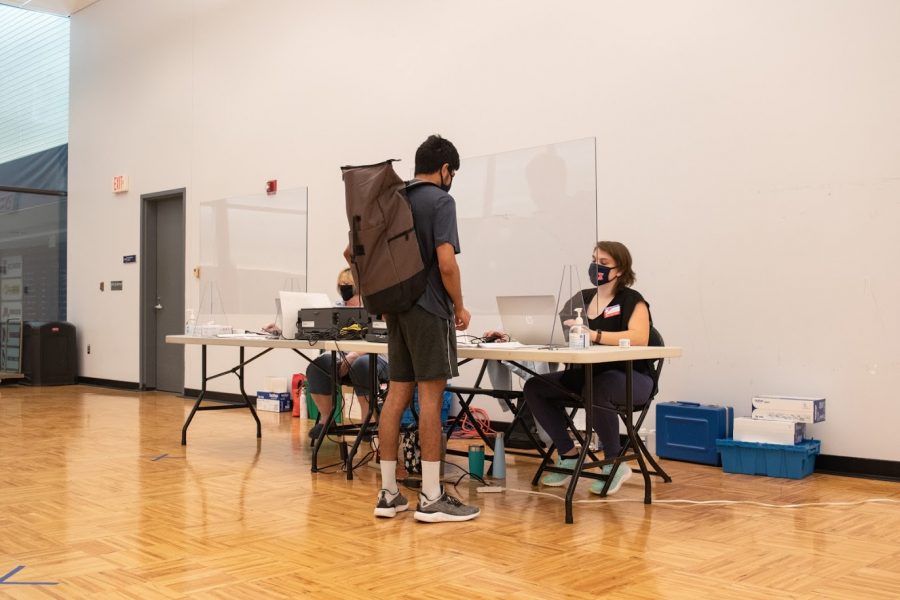 A student voter checks in to cast his ballot at the table in Multi-Purpose Room 7 at the ARC on Friday. There are multiple early voting locations on campus.

As Election Day draws near, many have raised questions as to how voting works in the middle of a pandemic. Debates about mail-in voting as well as the safety and accessibility of polling places have fired up across the country.

The number of people opting for mail-in voting has surged, in large part because of COVID-19. Pew Research Center found that mail-in voting accounted for 11.3% of primary votes before March 13, the date the President declared the pandemic a national emergency. After that date, Pew found that the number shot up to 51.5% of votes.

Those in Champaign-Urbana who still wish to vote in person may head to one of the many polling stations located around campus and throughout the cities. Widespread early voting opened up on Oct. 19 in Champaign County and will continue until Nov. 2. Voters can choose from 11 polling sites in Champaign, Urbana, Mahomet, St. Joseph, Rantoul and Tolono.

At each of these given sites, voters will be met with elections judges to help the process. Sasha Rushing, freshman in LAS, works in this position on campus.

This will be Rushing’s first year as an election judge as well as his first time voting in a presidential election. After registering to vote in the primary election, the Champaign County Clerk’s Office reached out asking if he would be interested in being an election judge.

“I looked at it and I thought ‘this is something that I think is worth doing’ and so I registered for the training,” Rushing said.

To work as an election judge, one has to meet a list of qualifications. The County Clerk Office’s website says candidates must be comfortable with technology, able to speak, read and write in English, be a citizen as well as several other basic requirements. Most important, the website says, election judges must be flexible and able to adapt.

Every judge must complete a four-hour training before each election which is carried out online this year due to the pandemic.

For registration, the election judge checks in voters.

“Especially for early voting, there’s a lot of people who are registering to vote for the first time,” Rushing said. “They have to get their names, address, ID and stuff like that and then you register them in the system.”

Rushing wanted to remind new voters to bring two pieces of ID, most likely their driver’s license and student ID, as well as proof of address. This could be a piece of mail or an amazon delivery receipt from the past 30 days or the housing registration page for those students in dorms.

When working at the tabulator station, they help people to make sure the ballot they submit goes into the machine correctly. Sometimes, if one of the categories is blank, the machine may say the ballot has a problem. The election judge will check with the voter then to see if they intended to leave that section blank, or if they wanted to fill it out.

Because of the pandemic, some of the processes have been altered to make voting a safer experience for everyone.

“All election judges are required to wear masks at all times,” Rushing said. “We ask that voters also wear masks, but we are not allowed to enforce that.”

In addition to wearing masks, the elections judges must also sanitize the polling center thoroughly and often. They also have a system put in place so voters pick up one pen at the beginning of the process then put it in a box when they’ve finished turning in their ballot. After the box is full, election judges spray all the pens down before returning them to the front desk again.

For those coming to vote over the next couple of weeks, Rushing asks people to be considerate.

“It would be very nice and it would really help that everybody comes in wearing a mask,” he said.

Overall, though, Rushing said the process has been operating smoothly.

“I think (voters) should know that it’s quite safe, there’s a lot of space in all of the locations,” he said. “I’d say things are pretty good overall, we don’t have any particular concerns.”