Drummer carries on with musical journey through pandemic 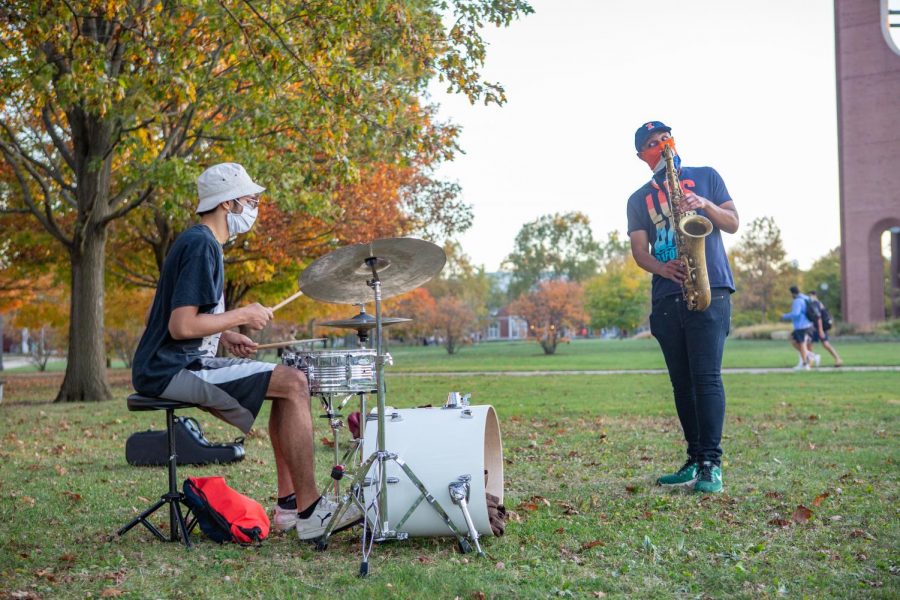 Senior Shravan Raghuram performs on the drums alongside senior saxophonist Kevin King on the South Quad on Oct. 22.

Since 2018, Shravan Raghuram, senior in Business, has averaged one live performance per week usually drumming with local funk band The Data Waves. Now several months deep into the pandemic’s sedation of Champaign-Urbana’s music scene, Raghuram continues his journey in music both with the band and as a solo artist, sunswan. The Daily Illini spoke with Raghuram about his new releases and navigating the pandemic as an independent artist.

DI: What are you most proud of or excited about with these new singles? What do you want people to listen for?

Shravan: Definitely the production and the layering. The thing that I really focused on with these new songs was making sure that I’m filling every little nook and cranny that I can for those big exciting moments, and stripping everything away for quieter, more simple moments, to try and just make it feel bigger and more epic. I want it to feel like this huge orchestra or something in this massive hall, instead of like a couple of guitars, a bass, drums, and then just kind of the same thing for four minutes, you know. Like I was trying to get out of that rhythm and make something that was more dynamic.

DI: What’s been most challenging about being an artist this year?

Shravan: Now that we’re in this pandemic, you don’t have that active creative workflow where you’re constantly exploring new ideas and new things because you’re not really working with new people. So because of that, not only myself but a lot of musicians I’ve been talking to recently have been feeling like they’re sort of spinning their tracks a little bit as a musician like they feel like they’re kind of going through the motions — every solo sounds the same, every beat sounds like a type beat. It’s like this thing where we’re trying to break out of this loop.

Shravan: It was fun. It was kind of scary the first time just because I didn’t know how it was going to go. I felt hesitant to invite a lot of my friends or post about it also because I didn’t really feel comfortable encouraging people to not be inside. I feel like this is a time where we all need to do our individual part in order to make this better for the collective whole. But the thing is, how can I say that if I’m also trying to get people out of their house just because I have a show, you know? So, battling with that was kind of weird. Because obviously, as musicians, we all want to play shows. You want to bring people together in a troubled time as well. But it’s a safety issue — what if people need to use the bathroom? What if we run out of hand sanitizer? What if someone is coming up to you and talking to you really closely? There’s just a lot of questions and not a lot of answers, you know.

DI: You’ve been hosting these outdoor jam sessions — how are they going?

Shravan: They’ve been really fun. It’s just good to just get outside and play. Sometimes some of our friends will come out and they’ll be drawing, or painting or taking pictures, and sometimes there are people who we don’t even know, and they’ll pause for a second and then they’ll just stay, sometimes for multiple hours, just because. And just seeing that is beautiful, like being able to do something that can still, in this current environment, just have a bunch of people who don’t know each other sit down and appreciate the same thing that’s going on right now.

Shravan: I originally wrote it last year, so it wasn’t really a result of the pandemic or the sort of social climate. But the original idea and what it means to me is kind of this escapism thing. I’m like, I feel so melancholy, or alone, so whether it’s like I take something, or I listen to something, or I feel something — I don’t specifically say what it is — but something takes me to outer space, where I can be away from myself, and away from my body, and away from the world that we’re in now, and just be in this big, grand kind of spacey whatever — just a new environment, right?

After the pandemic happened it kind of gave new meaning to the song because a lot of us were dissatisfied with the world around us. Celebrities were dying, you know, black people were dying at the hands of police. There were a lot of issues regarding sexual abuse. There was just so much happening and so much coming out at the same time, and it’s all during this pandemic. So it made a lot of us just fed up with everything. Not that escaping from where we are is a good thing — it is important to confront those issues. But also when you’re making music, you want to make people feel good, and I felt like it was a time where people could use some of that energy, you know—a song that takes you somewhere else.