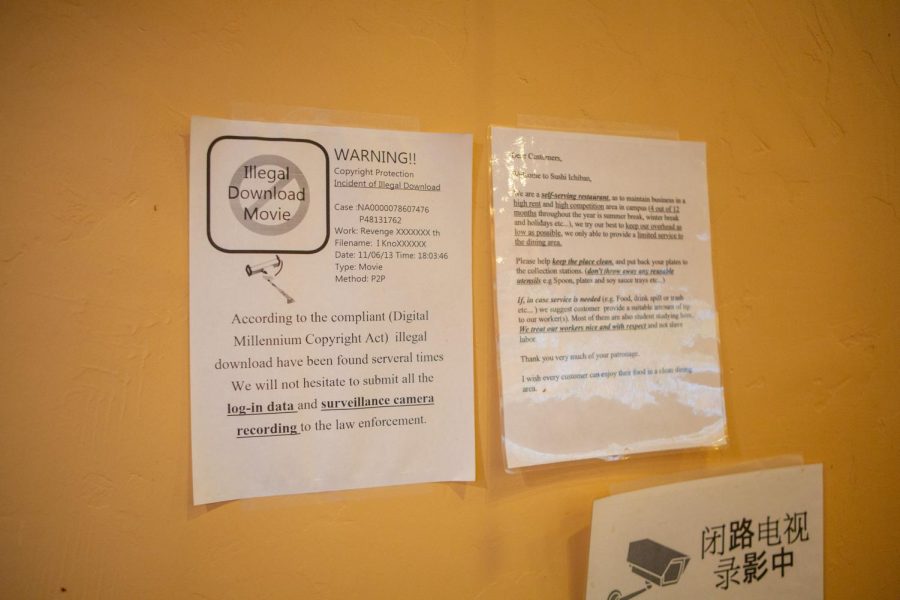 A sign resting on the wall of Sushi Ichiban instructs customers not to illegally download files using the restaurant’s wifi.

For 51-year-old William Tam, the owner of Sushi Ichiban in Champaign, letters from Comcast alerting him that customers had been using the Wi-Fi to download illegal movies were unacceptable.

After using the time the downloads were happening and checking his security cameras, Tam confronted the suspect. After posting signs warning against illegal downloads, Tam says he hopes customers will comply.

“Nowadays, you only pay a few dollars and you can watch any kind of movie, so it’s not necessary to do that,” Tam said. “The responsibility is still mine.”

For many local businesses like Sushi Ichiban, Wi-Fi is an essential way to draw in customers. But for many businesses in Champaign-Urbana, it’s become increasingly difficult to prevent customers from using the wifi to download illegal content.

“We get these letters saying, ‘there’s illegal downloading activity detected,’ and that’s about it,” said Doug McCarver, the managing partner of Espresso Royale in Champaign-Urbana.

After getting letters from Wi-Fi providers, McCarver said there’s not much to do once they come since they usually arrive days or weeks later.

“I don’t really know how we would find out who was doing it either because the letter comes much later than it’s happening,” McCarver said. “Nothing’s ever come of it.”

McCarver suspects some of the illegal downloading comes from people in the parking lot and apartments around the shops. But even when the downloading is coming from inside the stores, McCarver said he doesn’t know how to stop it.

“It’s hard to tell when you look in a cafe and just see people sitting there with headphones on and their laptops,” he said. “If they’re doing something quietly, they look like anybody else.”

Like so many business owners, McCarver said he just wants to make sure that Wi-Fi is available for everyone, especially once dine-in is available again.

“We just want to have free wifi for everybody that comes in and we hope that people would not be selfish and use it for some sort of illegal activity,” McCarver said.

But when illegal downloading is detected, the University approaches the student and helps them learn about copyright laws and infringement.

“Historically, most individuals who infringe are unaware of U.S. Copyright laws and University policy,” Barnes wrote over email. “Once they are educated individuals tend to learn from the mistake and do not infringe again. This is the outcome the University hopes for.”

If the student continues to download copyrighted material over three times, a disciplinary officer under the Dean will agree upon disciplinary action.

But for Andrew Yun, the owner of Caffe Paradiso in Urbana, he was able to work with Comcast to put filters on sites assumed to be used for illegal downloading. After posting a sign near the checkout counter, Yun says he believes the filters are working.

“We must be doing something from the filters we put in, but there are some other sites that maybe move around that we might not be able to catch,” Yun said.

After getting multiple letters and notifications per month alerting the Yun family to illegal downloading going on within the cafe, often in the middle of the night, Yun said now they’ll maybe get one notification per month.

“I think we’ve done a pretty good job of maintaining the quality of service but still, there are people who get past those filters and remedies that we made,” Yun said.

Although they seemed to have cracked the code to stop the downloading, Yun said they still never figured out who was the source. But for him, the quality of the Wi-Fi for other customers was a top priority.

“We have no way of knowing who that person is,” Yun said. “If somebody was downloading and it wasn’t something that got caught, they’ll dominate (the server), and a lot of other customers were feeling their pain.”