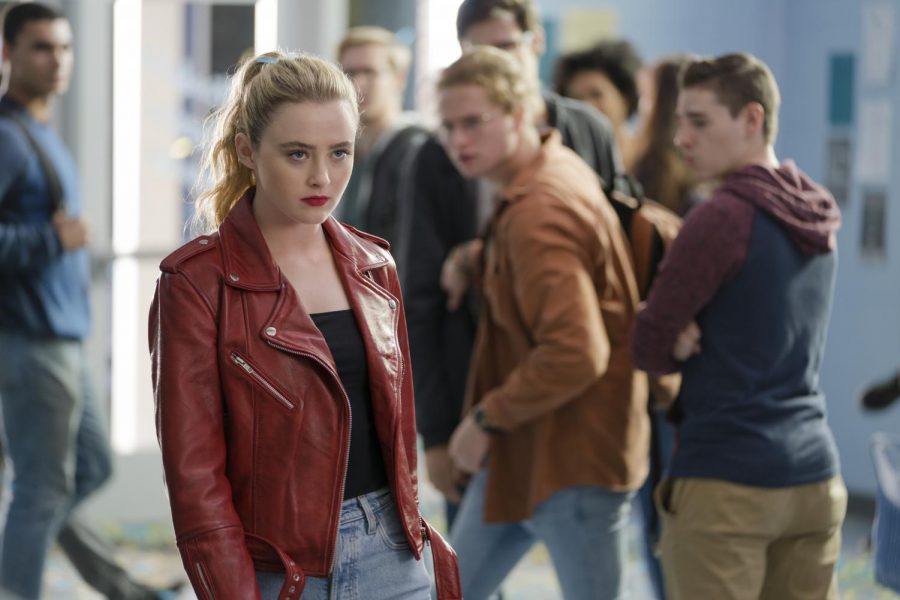 Kathryn Newton stars in the movie “Freaky.” The film was released on Friday.

With the release of their new movie “Freaky,” on Friday, actors Vince Vaughn and Kathryn Newton logged on to a virtual roundtable with college newspapers from across the country on Nov. 9.

When the Butcher attacks Millie with a stollen, cursed dagger after a high school football game, the two wake up the next morning in each other’s bodies. Millie, now in the Butcher’s body, must use the dagger on the Butcher, now in Millie’s body, before midnight in order to reverse the curse or else be forever stuck in the wrong body.

A little bit of “Freaky Friday” mixed with a hint of “Friday the Thirteenth,”  “Freaky” is another addition to a new wave of comedy horror films ushered in by director Christopher Landon (“Happy Death Day”, “Paranormal Activity 2”). The two characters, each stuck in the other’s body adapting to their new normal, set up plenty of opportunities for laughs throughout the film.

Vaughn, a veteran of the Hollywood comedy scene of the late ’90s and mid-’00s, attested to the effort needed to pull off the delicate balance of horror and comedy.

“It’s hard to do, to have that balance,” Vaughn said. “It’s hard enough to do one genre, let alone put both under a roof. (Director) Christ Landon has done it before with ‘Happy Death Day’ and I think he felt confident that the filmmakers involved would do a good job of balancing those two genres. The more grounded you are in the script, the more you help the audience buy the reality of the scene, and it helps you laugh. The kills are great too, there are some really imaginative funny kills in the movie.”

With the body-switch motif taking place through the majority of the film’s 101-minute runtime, both Vaughn and Newton had to embody two vastly different characters. To help develop their characters, the two actors worked off each other with input from Landon to bring the story to life.

“I had no idea how to play a serial killer and I didn’t know what Chris Landon was thinking when I was cast,” Newton said. “He said he saw a killer in me and thought I could do it, so I just have to trust that. I also didn’t know that Vince was going to have so many brilliant ideas, all three of us created these characters together starting with their backstories, which led to how they might carry themselves or walk, which led to the physical acting. With that kind of support, you feel like you could do anything. And then on the shooting day, you just have to be ready to take a lot of risks.”

In addition to embodying two distinctly different characters in terms of personality, Vaughn and Newton were also tasked with the challenge of portraying a character from a completely different generation from themselves.

Throughout the movie, there are scenes where Vaughn, portraying Millie, talks to her friends about typical aspects of the high school experience: phones, boys and social pressure. Alternatively, Newton, portraying the Butcher, has to act as a brutal middle-aged serial killer. Newton attempted to portray these multiple layers of persona best as possible.

“There were scenes where the butcher, in my body, was in a situation with teenagers where they were taking selfies and I did want to make sure he didn’t know what was going on, that he didn’t even know he was being photographed,” Newton said. “I wanted to show what a grownup might think a teenage girl might act like. It’s like another layer of the butcher being a man, then with everyone thinking he’s a girl, what would he do? Stuff like that goes into the acting, the dialogue, and even the outfit.”

Vaughn’s experience in the “frat-pack” comedy scene of the ’90s made portraying a character younger than himself easier than he imagined. Surprisingly, Vaughn said he had a more difficult time portraying the Butcher instead of Millie.

“With the career we do, I’m always playing make-believe and throwing things and having fun,” Vaughn said. “What’s fun about Millie is that she’s got a lot of great qualities, but she’s not giving herself all the permission to follow what she’s wanting to do. She’s strategizing not trying to disappoint a parent or navigating high school life.”

“That part was easier for me. The butcher was much more challenging in some ways of shutting out any empathy. But it was fun to play that, it’s always exciting to play different sides of human nature.”

“Freaky” was released on Friday, Nov. 13, a fitting release day, and is showing in select theaters.