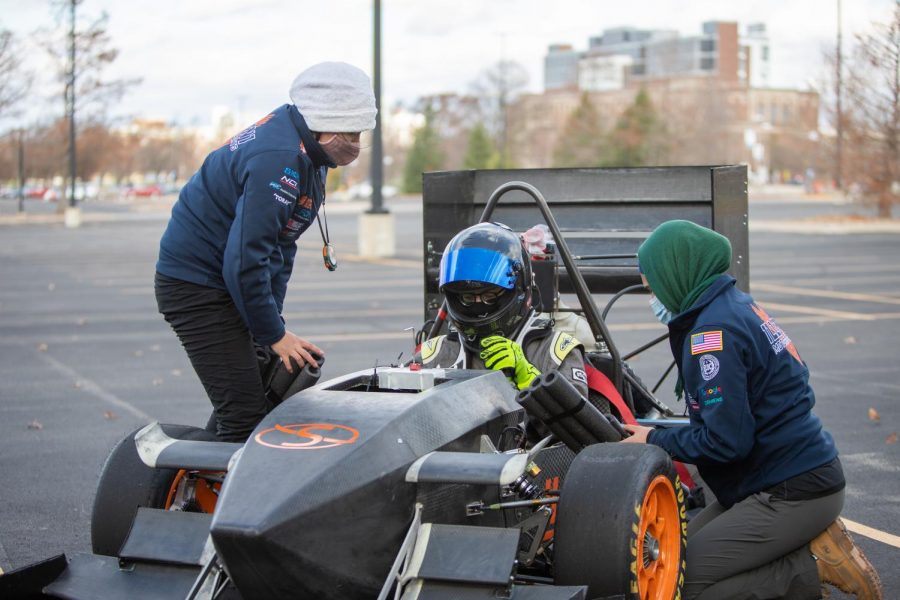 Salam Mulhem(right), senior in Engineering and President of Illini Motorsports works to prepare the car for a practice run. Salam is the team’s first female president.

On a cold, blustering Sunday morning, a group of UIUC students stood outside the State Farm Center watching a car zip around strategically-placed orange cones.

“As a minority, I know the value of diversity, especially in engineering,” Mulhem said. “That’s where you get different ideas, and so the more diversity we have on the team, the better we are as a group and the better we can perform.”

Based on data collected in 2017, every single program within the Grainger School of Engineering is male-dominated. Aerospace engineering, Mulhem’s major, is over 84% male.

“As people, we look for people to look up to,” she said. “I think it’s important to have diversity for students because the things that we do here are modeling what it’s like in the real world.”

Each year, students design, build, test and compete with a completely new car. With over 80 students involved in Illini Motorsports this year, members are broken up into subsystems to keep the process efficient.

“It’s all student built,” Joe Koszut, a driver for the team and a senior in Engineering, said. “Everything is one of a kind.”

But with the shutdowns last spring brought on by COVID-19, the team never got the chance to compete with their 2019-2020 car. Now, they have a second chance.

“We had lost of hopes, and then a month later, we just shut down,” Philpott said.

But for the 2020-2021 season, Philpott said this year’s team is better off since they already had their car built for competition. In a regular season, the car wouldn’t have been done until the Spring semester.

“For the first time, they get to evaluate and improve what they designed and built,” he said. “In the past, it’s been frustrating that they go to competition only having just finished the car, and they cannot get it to its potential before they start the cycle again.”

Mulhem says they never lost momentum, even with the shutdown in Spring and limited capacity in the Engineering Student Projects Laboratory, or the garage.

“We’re really proud of our ability to adapt to the situation. From the start, we made sure we never lost momentum,” she said. “We maintained work sessions over Zoom and were able to do so pretty successfully compared to other schools.”

As of 2018, the University’s Formula SAE team was ranked 26th in the world. While the 2020-21 season deadlines creep closer and closer, members say they’re ready and looking forward to competing.

For Lucas Day, a junior in Engineering and the team’s Suspension Lead, there’s nothing like watching the car come to life.

“It’s really rewarding to see the car come together after you’ve been designing and manufacturing it for 6-8 months, and finally see it roll or drive for the first time,” Day said.

As a member of leadership, Day said he puts in 40-60 hours per week with the team. But for him, being able to lead younger members and train the next group of leaders is worth it.

“I sacrifice a lot to be a part of leadership, not only to work on these projects but to lead the underclassmen through their projects,” he said. “It’s a really great experience to not only do all of this awesome stuff myself but to teach younger members.”

Sarah Laundriau, a sophomore in Engineering, works with upperclassmen members all the time as a member of the Drive-Train subsystem. As an underclassman, she said one of the best parts is learning to work with others.

“Building the car is one experience, but being around people at this level of intelligence is really awesome.”

As the Illini Motorsports team continues to work on their car for the upcoming season constantly, Mulhem says she’s hoping that the changes she’s made as president will help the team succeed for another forty years.

“We’re turning this page into a new era and we’re going after big ideas,” she said. “It shows that from day one we’ve been producing high-quality cars and high-quality engineers and that we’re still pushing those boundaries every single day.”