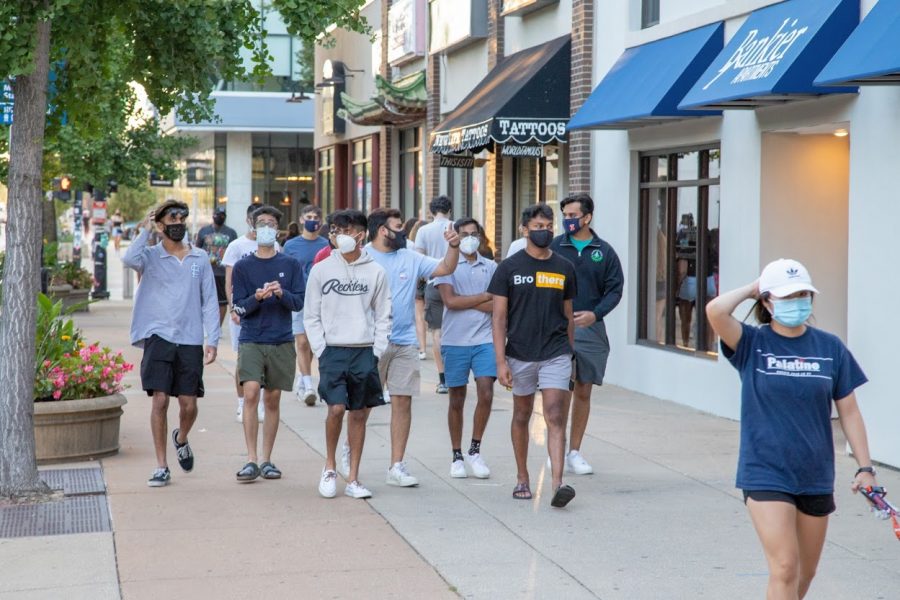 A group of students wearing masks walks down Green Street on Aug. 21.

As the presence of the pandemic looms in everyone’s minds, the importance of wearing a mask continues to remain a key part of everyone’s day-to-day lives. With so many single-use options to choose from, however, it can be overwhelming to think about all of the waste that has been produced directly as a result of one-time-use masks.

Shantanu Pai, zero-waste coordinator for the Student Sustainability Committee, has been working closely with and helping Madalyn Liberman, senior in ACES, to navigate an idea she had to combat this issue.

Liberman came across an article about a Vegas hotel recovering masks and said, ‘Can we try this?’ She ran with the idea. She connected to the hotel, reached out to ask what they did and how and then learned that TerraCycle was the vendor that they used.

“She connected with TerraCycle, conducted a series of interviews with them and worked with our staff to figure out how we would begin,” Pai said.

With the campus being so spread out, it was also important to reach out to as many buildings as possible in order to be able to offer this service to a greater community of students and faculty. The goal was to have at least two bins in the open space of each building.

“We sent out a request early in the semester asking buildings if they’d want to be location sites and thirty-five agreed,” Pai said. “Then we prioritized to make sure that there was coverage across campus. Spatially, we’re pretty spread out.”

However, due to a lack of foot traffic through many of these buildings and the resulting unfamiliarity with the recycling program being offered, the bins have not yet had much use.

“We haven’t had anybody replace a bin so we’re not having a lot of use yet, which could mean one of two things,” Pai said. “It could mean that people don’t know (the bins) exist yet. The other thing is maybe people are using reusable masks and the idea is to promote it, and that’s what we’ve been working on— to get people to know that it exists.”

In light of the difficult times everyone is facing as a result of the virus, the Student Sustainability Committee wants to make something as simple as recycling a used single-use mask at least a little easier for everyone while also encouraging those who
hadn’t previously considered it to give it a try. There are so many opportunities to make a difference and help the campus community take one step closer to becoming zero-waste and the SSC hopes that this program will be one easy way for everyone to make a difference and possibly even get involved.