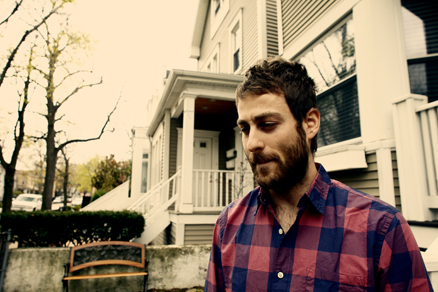 Artist Mike Kinsella of American Football poses for a photo in Chicago in 2011.

In Urbana, Illinois, amidst the cornfields and the college campus sits a house iconic to fans of emo music, particularly fans of American Football. A photo of the house can be seen on the cover of their self-titled 1999 album.

Recently, Mike Kinsella, a member of American Football, sat down with The Daily Illini to talk about how his career developed since that first album.

The Daily Illini: Can you walk me through your musical journey?

Mike Kinsella: My brother started high school and within the first couple of weeks he came home with a bunch of friends and they were starting a band, practicing in the basement. I weaseled my way into the band. My brother didn’t want me, but his friends were like “Nah you can play rhythm guitar.” So cap’n jazz was my four years of high school essentially.

After that, we broke up, I went to Illinois, joined American Football sort of. The other Steves were already sort of jamming. I joined them my sophomore year and then that band broke up. And then I got out of school and I had been touring just in summer and spring breaks. So I just started playing myself and as Owen, that band by myself, and then American Football got back together in 2014. It totally took us by surprise just as much as everyone else.

DI: How did you specifically get involved with American Football at Illinois?

Kinsella: I joined a band called the One Up Down Stairs and then they broke up with their fists actually, it was kind of exciting. The drummer of that band’s name was Steve Lamos and my roommate’s name was Steve Holmes. We were all friends and the Steves started playing together for I don’t know how long. Just a couple of days a week they would just jam in Lamos’s living room and it was super organic. And so I would be like ‘hey what are you working on?’ and he’d show me a thing and pull my guitar out. I was writing parts to their songs and then Steve invited me to his living room and they were like ‘okay let’s play a show’ and then we were like ‘let’s record these’.

DI: What prompted the band to get back together in 2014?

Kinsella: We were kind of tricked into it. I had a manager just for my solo stuff and it’s a buddy of mine: I like him, trust him. He’s a friend. He had reached out to some promoters without even asking just like ‘hey if American Football got back together, what would it look like?” And so he came to us and with this proposal.

I just kept saying no and wasn’t really in communication with the other guys. It seemed fun enough and cool enough that the first proposal was to play in Champaign at the Pygmalion fest. And then it was two shows in New York for literally 100x bigger than what we thought was possible. We were like ‘wait, really?  The New York show sold out the next night and sold out again, making it three nights. We were super nervous at this point because we thought we would just play in front of just be our family and friends. We knew we had to recruit a bass player so we got my cousin Nate. We did it and it turned out 15 years later we got along better because we were more mature and we all have families so we’re all on the same page in life.

DI: The American Football House on the cover of your first and second album has become a landmark for emo fans that come to our campus. What’s special about the house? Why did you decide to make that the cover twice?

Kinsella: We just liked the photo, to be honest. Our friend Chris who is down in Champaign is a super talented photographer and he was already doing artwork for albums and stuff. So we asked him and just sifted through some of his photos. He lived in that house with his then-girlfriend, now wife. And we’ve had other friends live there. It was a house that was on our radar, but yes we just liked the photo and then the second time we thought it’d be cool to tell the story from the inside.

DI: I wrote a story where I talked to a grad student that lived there last year who said people from all over come to see the house. I also talked to a band that performed there for a one-time venue. What do you think about all of that?

Kinsella: To be honest, I don’t think about it. I got other things going on. It wasn’t like we were trying to make some sort of statement or decision at the time. As an adult, I’ve made way more sort of artistic decisions that if they become relative or iconic I’m proud of. For us, it was just all of us in a room and we just picked a photo, there’s not really an attachment there. I’m aware that it’s a little niche thing and it’s cool. Every so often people tag me and they’re like flicking the house off .

DI: When you first started with American Football versus now, your music sounds different. What is your motivation behind this evolution?

Kinsella: It’s funny because if you were to just stream the albums in a row it takes a left turn but like we’ve lived 20 years. My taste in food has changed, my taste in friends has changed, my taste in movies has changed. So when I’m writing now the goal is to evoke something that’s really different than what I was trying to do then. In my mind, it’s not even that different but it comes out different and my voice is different. At the time we were kids and we were literally learning music and different time signatures and twenty years later it’s sort of ingrained in us. So now it’s not so much about ‘oh look at this time signature’ but more like ‘well how do we build a song’.

I think people got into us at this formative, younger age. We’re not like blink 182, catering to 10-year-olds. In college there’s a lot of transitions happening, life transitions, you know. And that’s how they’ll associate the music and associate me and that’s what they’ll expect for the next record.

DI: What would your advice be to students wanting a career in music?

Kinsella: My advice is to do it. I think it’s easier said than done. I had this wildly supportive mother that let us practice in the basement and let us go on tour. I knew there was always a safety net in case we broke down in Ohio I knew I could call my mom. Other people that were in the scene in bands would graduate and be like ‘oh well I guess I better get a job’. I guess it was secure, but I guarantee I had way more fun. If you want to do a music performance, my advice would be to go perform. Just do whatever you want.

DI: I saw that American Football recently recorded “Stay Home” with a COVID-19 twist, but is there anything else in the band’s future?

Kinsella: Yes. We’re trying to write a new album without ever being in the same room with each other which has proven to be at least challenging but maybe impossible. So there’s a lot of files being passed back and forth and a lot of Zoom calls but you’re kind of losing a lot of vibes. I don’t even know as a career if playing live shows is foreseeable in a couple of years so I don’t know if everyone in the band can wait for it?