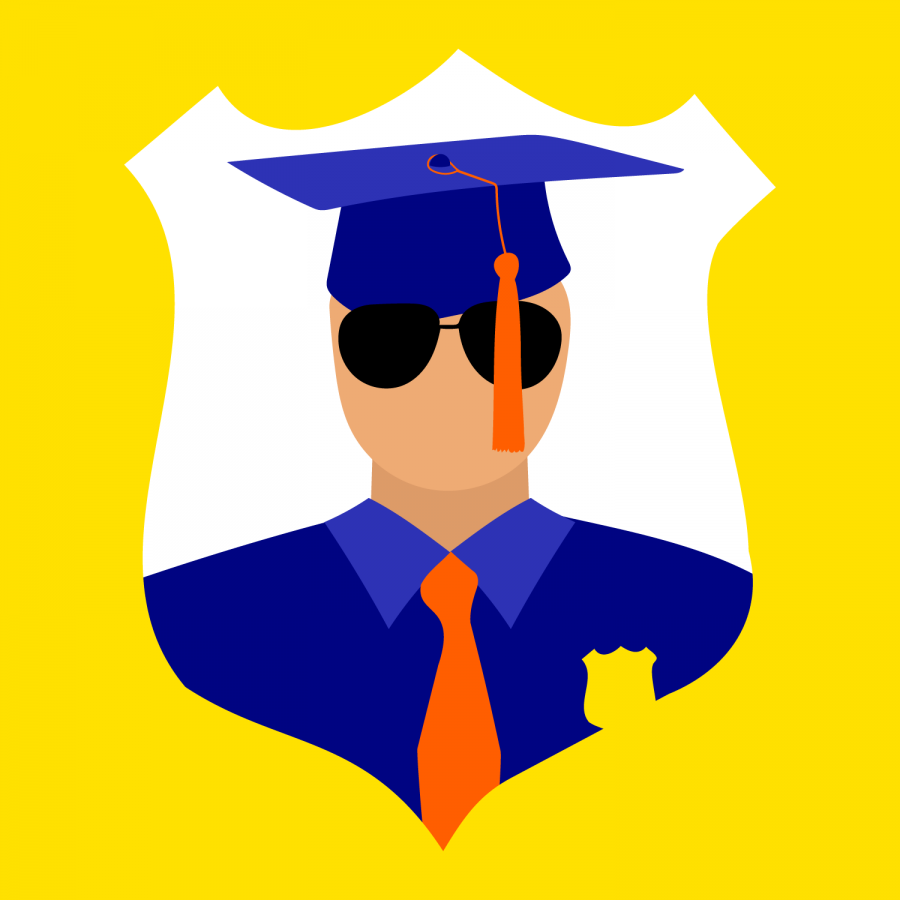 When Officer Tara Hurless orders a coffee on campus, she said she doesn’t just grab her coffee and go. She likes to talk to students with comments like, ‘Hey, what are you studying’ or ‘Hey, I had that professor.’”

As a University alumna, Hurless said she believed she could relate to what students on campus are going through.

“If people can see police not just as police but as human beings, like someone who was in your shoes at the same university as a student not so long ago, we can have these conversations,” she said.

As of 2020, 14 of 99 UIPD employees were graduates of the University, filling roles in sworn and civilian positions.

“There are currently challenges in police recruiting (even prior to the renewed attention on police operations this year),” Gwen Fitzgerald, the director of communications at the International Association of Campus Law Enforcement Administrators (IACLEA), wrote.

While campus police departments face staffing problems throughout the county, Fitzgerald said that student programs like Student Patrol at the University are essential to inspire the next generation of law enforcement.

She said this added capacity to the agency, to let students serve as “ambassadors” of the public safety agency, and piques the interest of students for careers in public safety and law enforcement.

Many UIPD officers like Alex Tran, a 2016 graduate, started out in Student Patrol at the University. When he joined the UIPD after graduation, Tran said he was often the same age as students on campus.

“I was 22 turning 23, and I’m basically the same age or even younger than some graduate students,” Tran said. “I was essentially talking and dealing with my peers.”

When talking to students on campus, Tran said he often acknowledged the fact that he was in their shoes often only months before.

“I was in the same shoes as you getting wasted at Kam’s,” he said, “and I would be able to relate to them and get them to cooperate more just because I was closer in age with them.”

Not all Student Patrol Officers go on to join the UIPD as sworn police officers, though. Daniel Kunde, a graduate in 2017, joined the UIPD as a telecommunicator. he said Student Patrol opened his eyes to what public safety is and what he could do to help.

While a Student Patrol officer on campus, Kunde said he often had to switch gears from being a student to working as an officer.

“Being a student by day and working student patrol by night were just two different mindsets that you had to have,” he said.

When University alumni get hired on as staffers with the UIPD, communications director and 2009 alumnus Patrick Wade said they often have a headstart over hires from outside the University.

“They’ve already been here in the community for a few years and they have a good feel for the community, the people, the different resources that are here and the geography of the campus,” Wade said.

For many campus police departments throughout the country, even police chiefs are often alumni who rose through the ranks of the department. Chief Jill Lees of the Indiana University Police Department, started out in the Cadet Program at IU.

Lees worked at the Plainfield Police Department for years before coming back to IU and said that she felt like she was home once she came back.

“I felt like a kid again,” Lees said. “I felt like I was that cadet and I was learning all over again.”

She said one of her main priorities is interacting with the cadets at IU and trying to keep them in the department post-graduation. In her eyes, they already understand  campus culture and what it means to work in law enforcement on a college campus.

“Since I’ve come back, we’ve definitely turned inward to say, ‘We have such great training and great recruits here, why are we not trying to keep them?’” she said.

As people across the country, often on college campuses, call for police reform amid concerns over police brutality and systemic racism, training students in law enforcement can gather criticism from the local campus community.

“Most of the faculty, staff and students point fingers at us because we’re training our students to be cops, but we can obviously foster a great learning environment and train the next generation of law enforcement to be more resourceful and caring,” Lees said.

While many staffers at the UIPD deal with local community members who hold the same opinions about police reform, Kunde said that working with people who may not agree with you is part of the job.

“If you’re not willing to sign up for that, then maybe public safety isn’t for you,” Kunde said.

And for officers working within the campus community, Tran said the community’s feelings towards the police doesn’t change what he came here to do.

“I can put myself in the shoes of some of these people who are crying for defunding the police,” Tran said. “But for me, it doesn’t change anything because I’m here to save lives and to help people.

Although many UIPD staff aren’t representing the University as students or athletes anymore, Hurless, a former soccer player in the University’s Hall of Fame, said she always knew she’d come back and wear the orange and blue again.