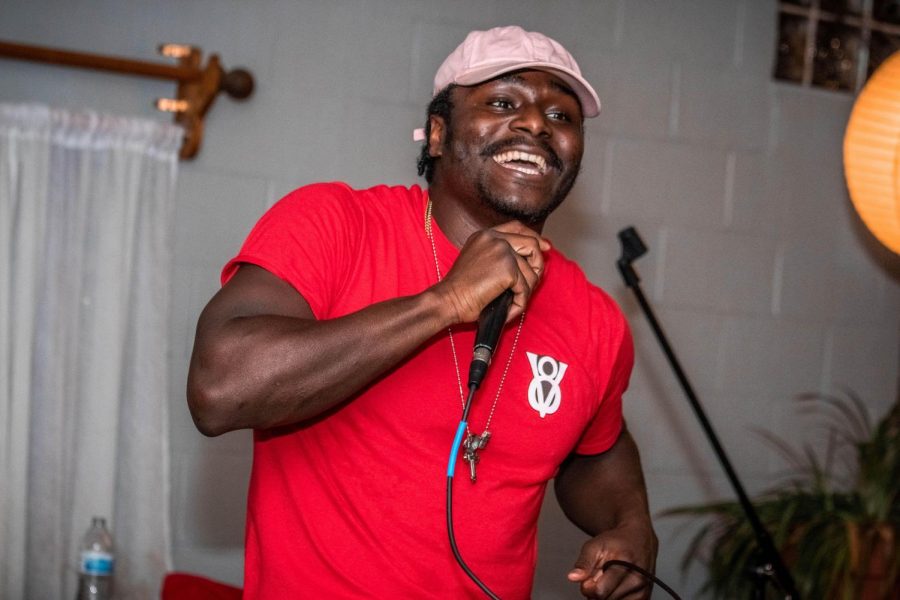 Tres Mercer waited, like he had hundreds of times before, for his cue to take the stage as rapper 94 Cove. He visualized his performance and heard the music in his head. Familiar nerves fluttered at his fingertips and in his chest.

He stepped into frame beneath mounted lights beaming purple-white. A DJ booth filled the space behind him, bookended by two standing speakers. On-screen, the illusion was complete: a true music venue with Mercer at the center.

Meanwhile, Mercer himself faced the walls of a converted sunroom-turned-stage. He performed for an in-person audience of three: cameraman, DJ and lighting technician. After his fifteen-minute set, he went outside the house to join the ten other performers gathered sparsely around a fire.

“We were fortunate that it wasn’t too bitter that night,” event coordinator Robert Kjeverud said.

On Dec 5, 11 emcees came together for Danksgiving: a Facebook live stream event featuring the best of local rap. The ambitious production was Champaign-Urbana’s first live hip hop event since February.

Thus, the pandemic’s first C-U hip hop show didn’t happen on a bar patio, or in a heated tent, but in a sunroom stuffed full of equipment.

“There’s no options for hip hop anywhere,” Kjeverud said. “So instead of waiting for someone to do it for us, or waiting for it to happen, we just did it.”

Danksgiving revived C-U Planet Music, a DIY music and arts venue last active in 2017. According to its Facebook location tag, Danksgiving was hosted ‘at’ Planet Music. But the thing about Planet Music, Kjeverud half-joked, is that “it isn’t a place — it’s a people.”

This time around, Planet Music is something more symbolic and less tangible. It simultaneously describes a community of artists and a creative space, neither of which are geographically bound. As C-U hip hop rides the pandemic’s virtualizing, isolating forces, Kjeverud believes flexibility is their greatest power.

In the spirit of Planet Music’s bending of borders, Danksgiving included a few artists from out of town — artists who, while not based in Champaign, are important to the Planet Music scene.

Dominique “V8 Vast Change” Stevenson drove an hour from Bloomington to perform. He has made this trip a habit over the last couple of years, balancing his participation in the scene with working two jobs and being a husband and father.

For Stevenson, open mic night at the Canopy Club was worth the extra miles. It was there that Stevenson made himself known, over weeks and weeks — 10-minute sets at a time.

“That was my way of showing the people in the area that I’m not technically one of you, but I deserve to be onstage with you guys,” Stevenson said. “Like I can hang with you, you know? I can add another element to this music scene.”

Stevenson brought art and activism to Danksgiving in a uniquely moving set. With both power and nuance, he rapped about his lived experience as a Black man; about his daughter, for whom he is determined to build a better, kinder world.

Jeffrey “Shaya Rhymes” Spires made his own trip from Chicago. He was quick to accept Kjeverud’s invitation after nine long show-less months.

Spires did not lament Danksgiving’s lack of the trappings of live music—a lone cameraman instead of a euphoric crowd; a yard scattered with masked friends instead of a lively bar. Rather, he found comfort in the event’s humble character.

“That’s how I started,” Spires said. “It was just jumping into freestyle cyphers and open mics, even if it was just other artists there. So it was kind of cool for me. It brought me back to feeling like a hungry SoundCloud rapper again.”

Spires centers his performances not on spectacle, but on the authentic expression of joy and pain. Centerstage in the sunroom, he rapped about childhood trauma; about the thrill of seeking existential purpose; about his bipolar diagnosis received at age 19.

“Nothing is forever, so you just ride the wave,” he said. “I’ve got to ride waves all day. That’s life.”

While Spires and Stevenson road tripped to Danksgiving, Mercer never left his hometown.

“There was a back room that you could go into, and I would put the CDs in there while my dad was on air,” Mercer said. “I taught myself how to use the equipment enough to listen to music. I don’t even think he knows that I did that.”

For the next 12 years, Mercer lived alternately with his father and in foster care. At 18, he entered young adulthood with a quiet, unshakeable independence and journals full of thoughts in rhyme.

A few years later when his raps first met the mic at the Canopy Club, Mercer found his focus.

94 Cove became an important voice in local music—the kind that exemplifies a scene; the kind that Kjeverud prizes as an event promoter and historian of C-U hip hop.

Kjeverud was proud to host and spotlight rappers of Mercer, Spires, and Stevenson’s caliber. On Danksgiving’s success, he continues to build Planet Music from the margins, from the ground up.

“When I look back on everything, there are certain moments,” Kjeverud said. “There are those things that people just said couldn’t be done. So when we pull these kinds of things off, I can look back and say, ‘here’s a time when there’s very little live anything going on, and now we’ve got 10 sets out there, and we did it, and they can be proud of it.’”