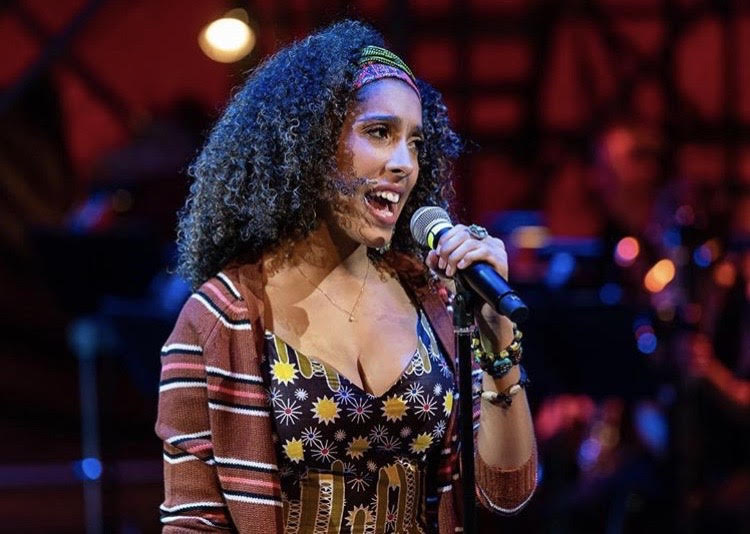 Sophia Byrd performs “PLACE,” the piece nominated for a Grammy award, at the BAM Next Wave Festival in 2018. It was Byrd’s first professional stage job.

Sophia Byrd, senior in FAA, was with her siblings over Thanksgiving break when she received a “Congratulations!” text from a friend. At first, she wasn’t sure of what she was congratulated for but quickly found out she was nominated for a Grammy.

Byrd sings in Place Orchestra, which is nominated for Best Chamber Music/Small Ensemble Performance and Best Contemporary Classical Composition. The piece is largely about gentrification and displacement. It was composed in 2018 by Ted Hearne with librettist Saul Williams and director Patricia McGregor.

“It makes me feel so incredibly grateful to be a part of this journey with all of these people,” Byrd said.

Throughout Byrd’s music career, she has a very specific driving factor for the music she works on: “I am a multi-hyphenated creator seeking to amplify the marginalized and disseminate joy.”

“I think, as I’ve been a music student, specifically in college, I have had the experience being the only person of color in the room and frequently, almost always the only Black person in the room,” Byrd said. “It’s always a weird feeling when you are talking about Black music and the civil rights movement and how that relates to music . . . via textbook that was written by a bunch of old white men who understand these concepts via their research, but not through experience.”

She saw Place Orchestra as a way to create change.

“If I am going to continue to pursue a career in this place that is so whitewashed and whiteness is the norm and standard, then I always need to be doing something to push back against that,” Byrd said.

Due to the pandemic, Place Orchestra was recorded and premiered virtually.

“To see the fruit of that labor to show up as a Grammy nomination is just so humbling and I feel so special and I feel like unworthy of it, but I’m so thankful that it’s happening to me,” Byrd said.

For University students hoping to succeed in the music industry, Byrd commented that a lot of it is being in the right place at the right time. The other part is finding projects which make a difference in the world, bring joy or pay bills.

“If the art isn’t saying anything, then it’s not really doing anything in the first place,” Byrd said. “I would say coming up with pillars that are important to you, and then when you consider working on projects or starting your own projects, really think about whether you are fulfilling those pillars for yourself.”

James Blachly, who graduated in 2013 with a master’s in orchestral conducting, was also nominated for a Grammy in the category of Best Classical Solo Vocal Album for the first recording of Dame Ethel Smyth’s composition “The Prison.”

“It’s thrilling and gratifying and, in some ways, reaffirming what all of us who worked on the recording already knew, which was the piece of music is deserving of the world’s attention,” Blachly said.

He said this was Ethel Smyth’s final large-scale composition, and he wants to advocate not only for this piece of music but also for the rest of Smyth’s music because it has been underperformed for too long.

“I feel she was sharing something vulnerable and deeply personal and the more that I engaged with her music, the more that I felt it start to have an effect on me, so I’ve just been grateful to experience her music in this profound way,” Blachly said.

Blachly also said one way of finding a successful career is by “choosing something that you want to work on for the rest of your life, and then no matter what happens with your career you will be fulfilled.”

Donald Schleicher, professor of Music and Daniel J. Perrino Chair of the Conducting Area, worked with Blachly when he was getting his master’s at the University.

“I recall James well and he was like a sponge. He tried everything that I asked. He’s smart and worked hard and therefore I’m not surprised that he has been very successful. He is a wonderful and humble person,” he said.

Schleicher also said musicians and conductors should strive to carve their unique path, and Blachly has done just that.

“Music students have to work incredibly hard, so the ones that are successful are those that don’t do anything else besides practice their instrument. One can’t be a professional musician and not work hard,” Schleicher said.