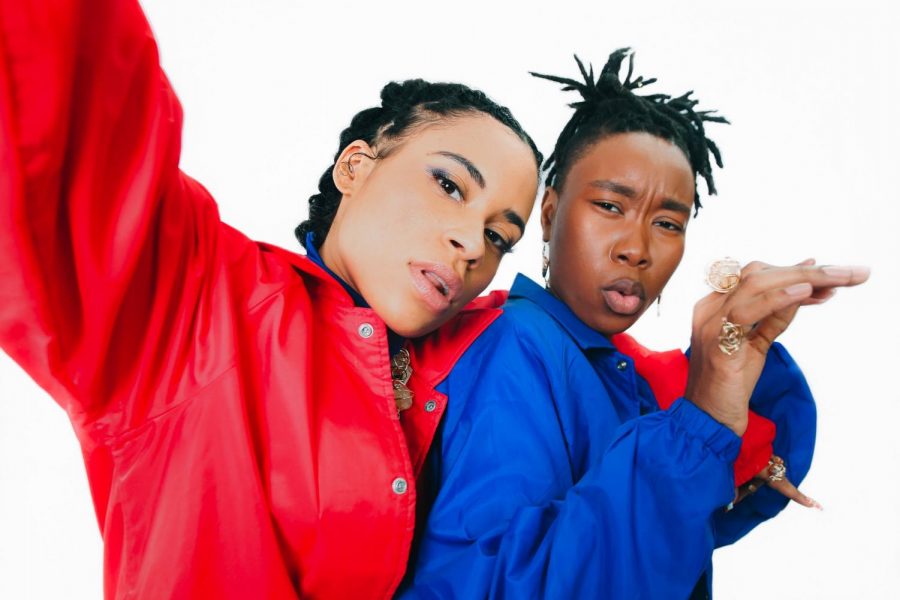 Mother Nature pose for a band photo. The duo has continued their “Miseducation” workshops through Zoom since the COVID-19 pandemic began.

Thin wooden disks dangled from Shasta Matthews’ ears down to her shoulders. Each earring featured a detailed cut-out of Lauryn Hill’s face as immortalized in the 1999 “Miseducation” album cover. Next to Matthews, Tierney Reed wore large round crystals from her ears and around her neck. Her red hoodie bore small white text: “Murder must stop.”

“It feels really good to be here, and to be in this Black girl energy,” Matthews said.

Since connecting at UI in 2011, Matthews and Reed have seen promising success as Mother Nature and as founders of their workshop series “The Miseducation of Hip-Hop.” While their reach as artists and educators grow, they hold steady to the localized, grassroots approach that first brought them to the IMC around 2015.

Matthews and Reed described these early years as punctuated by racial trauma. They recalled how the Champaign County Board was pushing to build a new prison, and how the murder of Trayvon Martin felt like an open wound. Matthews and Reed were moved to tend to the voices of local Black and brown youth.

“Nobody was listening,” Reed said. “Nobody cared to.”

In June 2016, Mother Nature hosted their first “Miseducation” workshop at the IMC. With support from the Urbana Arts Grant, the joyful event welcomed young Black students into the writing, production and performance of music.

Matthews and Reed found guidance for their “Miseducation” mission in Dr. Ruth Nicole Brown, founder of local organization Saving Our Lives Hear Our Truths. In 2014, SOLHOT hosted Black Girl Genius Week — a week-long celebration of Black girls as producers of culture and knowledge.

“Dr. B and SOLHOT was that main thing showing us reflected back to us in a way that was like, ‘wow, this is our life,’” Reed said.

These days, the “Miseducation” workshops operate on a structured and practiced curriculum. “Miseducation” has reached conferences, schools, and youth centers across the country and abroad. Since last spring, the program has continued its travels via Zoom.

Matthews and Reed fill each new space with nurturing and empowering energy.

In Mother Nature’s vision, the freeing of this genius ultimately feeds into communities. They believe that young people can learn to take care of each other by learning how to be creative together.

This ethos comes to life in Mother Nature’s artistic collective, The Gr8 Thinkaz. This community of Matthews’ Urbana High School peers has ventured on to Chicago. There, they continue to support each other in all the personal, creative ways that institutions cannot.

“Our household The Gr8 Thinkaz right now is our blueprint on how to make this a new society for the world,” Reed said. “It’s big and something that is going to take forever, but every day we get closer to that.”