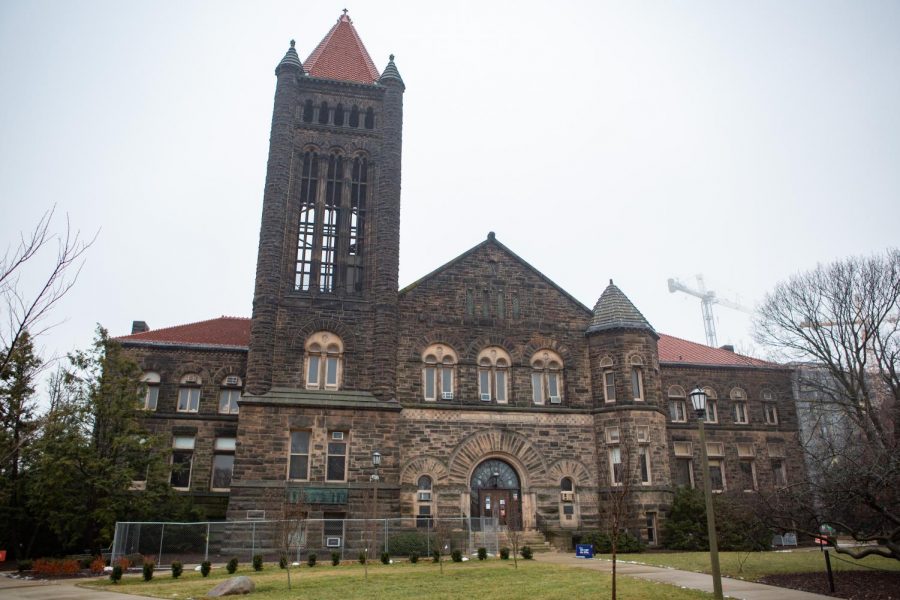 The Altgeld Bell Tower peaks high into the sky on Sunday morning.

From Alma Mater to the Altgeld chimes, some of the University’s most emblematic landmarks were gifts from graduating classes. Despite these gifts being some of the most recognizable features of campus, the tradition of class gifts tapered off in recent years, with no set position or committee currently in charge of future gifts.

Throughout the history of the University, class gifts have varied in size. The first class gift, given to the University by the class of 1872, was a bronze medallion inserted into a stone tablet. This gift cost $25 — $548 in today’s money — and was hung in University Hall, a multipurpose building that stood where the Illini Union now stands.

Other class gifts include the Eternal Flame (1912) which stands nestled between Lincoln Hall and the English Building, the barbecue pits in Illini Grove (1949-1950) and the furniture that resides in the Illini Union (1934).

Beginning in the late 19th century, class gifts were an annual tradition until the Great Depression. Throughout the mid-20th century, class gifts became more sporadic, with no consistent annual dedication. After a brief resurgence in the ‘70s and ‘80s, class gifts have tapered off in recent years. The last class gift on record was contributed by the class of 2004, and featured the renaming of the Engineering Quadrangle to the Bardeen Quadrangle.

Ryan Ross, class of ‘08, works as assistant director of the History and Traditions Programs for the University’s Alumni Association. Part of his job includes curating exhibits at the Alice Campbell Alumni Center. For Ross, class gifts serve as a reminder for those who came before him.

“I love the idea of class gifts because they’re intended to be permanent, and they serve as reminders of alumni who are no longer with us,” Ross said. “No one from the classes of 1914-1922, which helped to fund the Altgeld Chimes, are still alive. But when we hear the chimes play or the bells toll, every time that happens, it’s like a memorial to the alumni, and each time it (rings is) a statement that they were here, and the University meant something to them.”

Ross uses a website called the UI Histories Project to help recall gifts he may have forgotten about. Developed as an undergraduate thesis by Univesity alumnus Kalev Leetaru, the website serves as a comprehensive oral history of the University, with a page dedicated entirely to the history of class gifts.

“I (enjoy) looking through all the class gifts, it reminds me that some things that I walk past all the time are actually gifts,” Ross said. “Every day I take a walk on campus and I walk through the Illini Grove, and I walk past the barbecue pits. I had forgotten they were class gifts until I looked at this resource again.”

One class gift that sticks out to Ross is a boulder that rests at the northeast front of Altgeld Hall that most students walk by without a second glance. This boulder serves as a reminder of a former gift from the class of 1881 — a grove of trees.

However, the tree planted in 1881 was more than just a symbolic gesture. Instead, it led to one of the most interesting stories in the history of class gifts.

In the 19th century, the planting of class-gift trees became fuel for an interclass rivalry. The underclassmen would attempt to destroy the newly planted trees, while the seniors were tasked with protecting their trees. This rivalry became so intense that in 1881, an underclassman attempting to destroy the tree was shot by a protecting senior.

“That’s my favorite class gift story,” Ross said. “To our modern sensibilities, that just seems insane. And it’s such a nice idea to think of in their mind it was something they were doing that was permanent.”

Another alumnus who’s interested in class gifts is Bob Lumsden, class of ‘53. Lumsden worked for the UI Alumni Association until his retirement in 1993, and developed a passion for the class gift of 1878 through a personal connection.

In 1878, a student association dedicated a $300 clock, worth $8,167 in today’s money, built by a member of the graduating class. The clock was originally placed in University Hall, but when the hall was torn down to make room for the Illini Union, the clock was left without a home.

While Lumsden appreciates the history of class gifts, he wishes the tradition was kept up in recent years.

“The earlier class gifts were pretty constant, but there have been a lot of breaks since 1930 or so, and recently there’s been nothing,” Lumsden said. “I’m not sure who was in charge (of class gifts) in those earlier years, if there was any coordination as to what student organization or administrative body decided. You kind of think there must have been something back in those earlier days; but right now, to my knowledge, there’s nothing.”