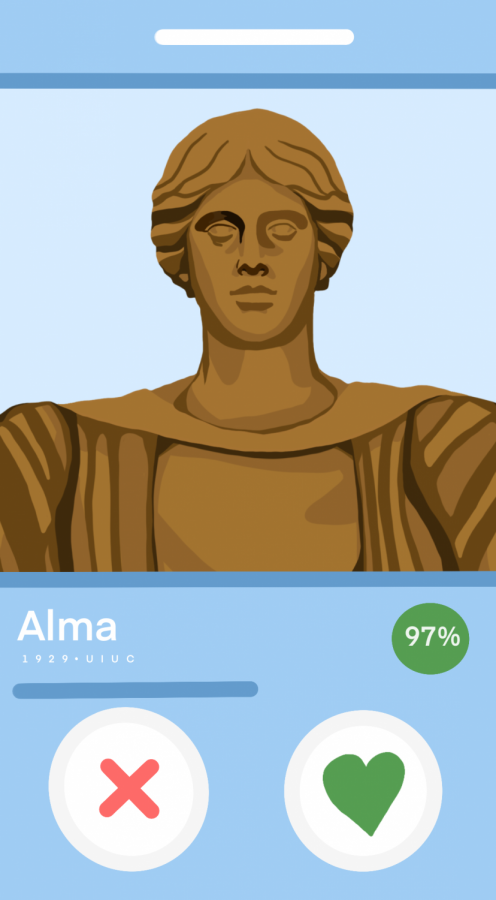 Datamatch, an online match-making service oriented around Valentine’s Day, was developed, like many tech startups — at Harvard University. Slowly but surely, Datamatch expanded to other universities. First, it traveled to other Ivy League colleges, then other prestigious universities such as the University of Chicago, New York University, and Massachusetts Institute of Technology.

Now, for the first time in its 26-year-long history, students at the University of Illinois have the opportunity to sign up for Datamatch.

Signing up for Datamatch requires an “illinois.edu” email address, ensuring Illinois students can only match with other Illinois students. During the week leading up to Valentine’s day, participants fill out a profile similar to other dating apps, such as Tinder or Bumble, with space for a short bio, sexual orientation and pronouns. What makes Datamatch unique, however, is a 20-question survey tailor-made for each university.

Participants answer humorous questions such as: “If you’ve __, you don’t need to worry about what’s in the vaccine” with choices of

Another question asks “What do you miss the most about pre-corona UIUC?” with potential answers ranging from “57 North’s quesadillas,” to “Squirrels falling from the rafters in Foellinger,” to “The stripper poles at Joe’s.”

The service’s algorithm then uses the survey responses to pair participants with ten compatible matches, sending out each participant’s matches on Valentine’s Day morning. From there, participants can choose to message their matches or unmatch if they are unsatisfied with their potential partner.

Leah Beran, sophomore in LAS, is responsible for bringing Datamatch to the University. She heard about the matchmaking service last year from her friends at UW Madison and was disappointed when she realized the service wasn’t available for UIUC students.

Determined to bring the service to Illinois, Beran reached out to the Datamatch team at Harvard. Datamatch responded, and asked Beran to be the campus lead. For her role, Beran wrote the survey questions and is in charge of advertising the service around campus.

“Since it’s the first year at UIUC, and it was sort of late notice when they reached out to me and told me they’d expand to Illinois, I did mostly all of (the marketing),” Beran said. “I’m looking to keep this going for future years (at) UIUC and hopefully get more people to be on the team, I think that will be really fun and lead to a more successful outcome.”

Despite being in its first year at Illinois, 780 students have already signed up and created a profile as of Feb. 11, according to Datamatch’s homepage. This compares to 2,800 students at Harvard, and 2,923 at UW Madison. Illinois’s 780 students constitute 2.29% of the school’s population. Proportion wise, Harvard has the greatest proportion of its student body signed up for the service with 46.41% of its student body having created a profile.

Datamatch is available at 33 colleges and universities across the U.S. and Canada. Beran notes that the exclusivity of Datamatch is what makes the service so appealing, and expanding to include Illinois students has contributed to a sense of school pride.

“I thought that was really cool, seeing the map of all the schools on the Datamatch website and seeing the Ivy League and Vanderbilt and the UCs, and now U of I is there too,” Beran said.

In addition to functioning as a matchmaking service, Datamatch has an option for participants to match for friendships instead of a romantic relationship. Whatever students are looking for, whether it be platonic friendship or a potential romantic relationship, Datamatch will help keep the Valentine’s Day spirit alive during a year where meeting new people and forging new connections have been hard to come by.