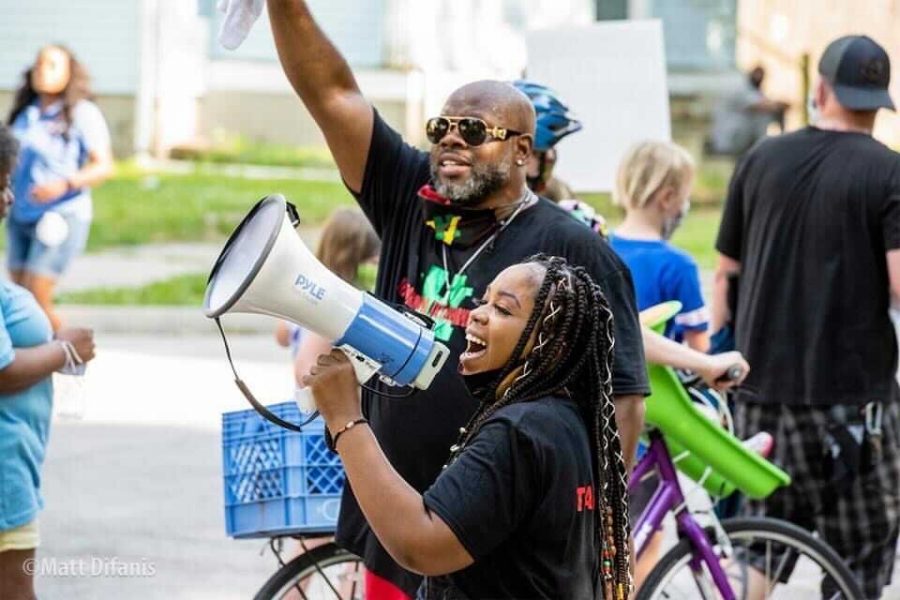 Titianna Ammons speaks at a March for Black Lives event over the summer in Urbana. Ammons is running for Urbana City Clerk.

This upcoming Tuesday, yet another new Ammons family member will appear on the ballot. Titianna Ammons, 31-years-old, is following her parents’ passion for government and running as a Democrat for Urbana City Clerk.

In addition to running for office, Ammons is a beauty queen, a traditional West African dance teacher, and a mom of two with multiple sclerosis.

As a young, Black woman with a wide range of interests, Ammons said she represents citizens of Urbana and would provide a breath of fresh air to the city.

“When the most vulnerable and underserved see equality, we all see equality,” Sickenius said. “As a young, innovative Black woman, Titianna understands that her position as a local official would be important because she would be representing the city itself.”

While Ammons hasn’t had prior experience as Urbana City Clerk, she said having lived in Urbana the majority of her life, she knows the community.

“I went to Urbana middle school and high school,” Ammons said. “I grew up here. This is my home and I want to make a path for other people.”

One of the slogans of Ammons’s campaign is ‘service is love.’ Ammons said she demonstrates this belief through her activism.

If elected, Ammons said she plans on inspiring positive change in Urbana.

Ammons’ opponent,  73-year-old Phyllis Clark, has served as Urbana City Clerk for six full terms. Clark said the purpose of the position is not to create change.

“The City Clerk does not engage in trying to make changes to Urbana,” Clark said. “We’re here to be of assistance to the people and be of need.”

Ammons said if elected, she hopes Clark will mentor her. She said she values Clark’s experience and service to the community.

“This is my chance to say ‘hey, pass the baton’,” Ammons said. “I want to know what you know so that I can continue the fight.”

Clark said she has not heard from Ammons yet. She also said she won’t give Ammons any information about what happens in the Clerk’s office if she doesn’t ask for it.

“If Titianna was running a race that was one of character, I wouldn’t mind mentoring her if she was to win,” Clark said. “But I think I wouldn’t at this point.”

Ammons said before announcing her candidacy, she and her parents asked Clark for guidance and mentorship to which Clark agreed. Shortly after, Ammons said she heard about Clark’s candidacy without any warning.

“She didn’t have any plans to stay and re-run,” Ammons said. “She doesn’t owe me anything but I would have liked at least a phone call because I had spoken to her prior.”

Ammons said for her, candidacy is not about power, but rather about service.

“I always wanted to be very clear that my family and I aren’t at all about power, we’re absolutely about service 100% of the time,” Ammons said.

This belief and Ammons’ wish to inspire change appeals to voters such as Sickenius.

“I’m supporting her because she’s excited about the future, she’s innovative and she’s constantly fighting for someone other than herself,” Sickenius said.

One initiative of Ammons’ campaign that Sickenius said she’s looking forward to is a community outreach department.

“One of the things that the city of Urbana needs desperately is a community outreach department in the city clerk’s office,” Sickenius said. “I think Ammons being city clerk will provide the community with the honesty and integrity it needs.”

Ammons said she encourages students to go out and vote. She said local government is just as important as the national government.

“I’m hoping the students find this election important because they come here, they live here, they spend money here and so they should be involved here,” Ammons said. “The only way for them to do that is by getting out and voting.”