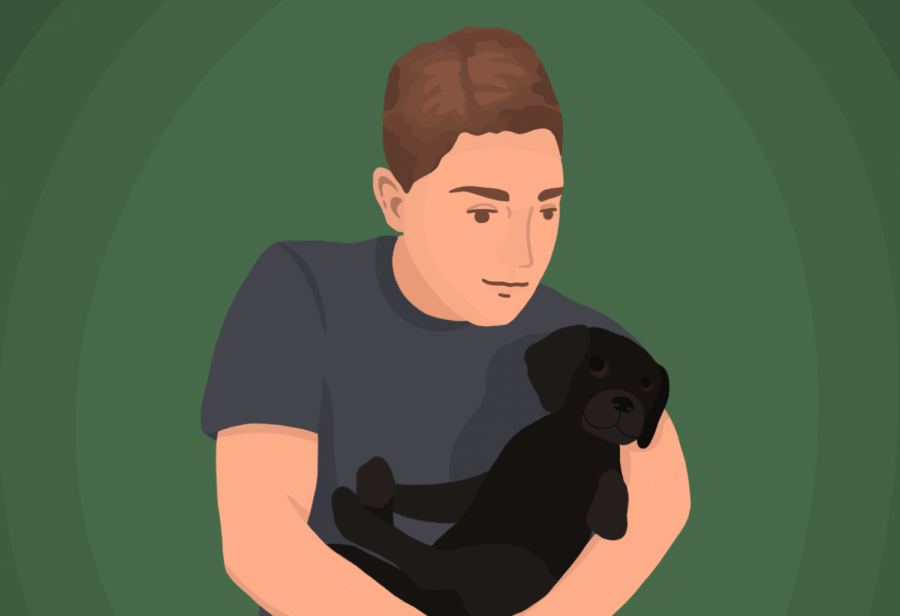 Going into the third semester affected by the pandemic, students have increasingly been searching for ways to help alleviate the stressors of life and take care of their mental health.

Self-care can look different based on the person. For some students, having an emotional support animal or spending time with therapy animals has helped them tremendously in taking care of themselves.

An emotional support animal is an animal that helps further treatment for an emotional or mental disability and provides the owner with things such as comfort, routine and other benefits that improve their quality of life.

When the pandemic started, Jordan Walters, senior in LAS, found it difficult to get outside and maintain a schedule. In an effort to help, she adopted an emotional support dog named Lulu.

“I didn’t even leave my house most days, but now with her, I have to wake up at seven,” Walters said.  “I have to get out and go outside five times a day, so she gets me out of bed and gets me moving.”

In order to get an ESA, one needs to have a mental health professional diagnose them with a mental health disorder from the DSM-5 and have the provider indicate that their condition would benefit from having an ESA.

Most ESAs are usually dogs or cats, but other animals can qualify.

Dr. Marcia Zumbahlen, local developmental clinical neuropsychologist and owner of A Dragonfly Mind LLC, said that she has seen some clients immensely benefit from ESAs.

“There’s certain things that my dog has been able to do in therapy sessions that I could never have achieved,” Zumbahlen said.

Zumbahlen said that in some instances, children with autism spectrum disorder or children who are nonverbal can relate better to animals than humans due to the simplicity of the animals’ actions.

What each emotional support animal helps with varies by the condition of the owner. From depression to anxiety to PTSD to ADHD, an ESA can help in several different ways.

The support of the ESA can “improve the chemistry of that person’s mind, and that service is a very important functional purpose in treating their condition,” Zumbahlen said.

Zumbahlen also said that society should consider rethinking the naming of an emotional support animal verses a service animal.

“If that animal is helping you do things that offset your depression and improves positive feedback loops you’re going to improve the neurochemistry for that person,” Zumbahlen said. “So why not call the animal a service animal as opposed to an emotional support animal?”

An important thing to consider before looking into getting an ESA, Walters said, is making sure one is able to care for the animal.

“It’s a lot of work,” Walters said. “You still have to do all of the taking care of the animal, things like you have to wake up early in the morning. If you’re getting a puppy like I got, you have to do the potty training.”

Another way animals have been helping improve the lives of others is by becoming therapy animals.

While ESAs require a letter from a mental health professional, therapy animals have to be evaluated by one of the organizations who register or certify therapy animals. They can only go places if they have been asked but cannot go everywhere, like a service dog.

Kathy Trammel volunteers with C-U Canine Connection. Their website stated they are  “a small group of wonderful animals and their owner/handlers who provide animal-assisted activities and therapy to clients in need.”

Besides bringing them to the University, Trammel and C-U Canine Connection bring their animals to many places, such as hospitals, fire stations and schools. Some of their animals are certified as crisis response dogs.

Trammel mentioned that she has seen many times how her dogs offer support to those in need. During a hospital visit, one of her dogs wouldn’t leave the side of someone who was going through the loss of a loved one.

“The dogs know who’s hurting,” Trammel said. “I mean, they feel it, and they feel any hurt and sometimes they come home exhausted because they’re feeling all of that.”

Trammel has brought her dogs to the University in the past during finals week, and she said that students would swarm over her dogs. She said her dogs were always surrounded by students petting them and taking lots of pictures.

“If I had a dollar for every student that took a picture of one of my therapy dogs, I would be rich,” Trammel said.