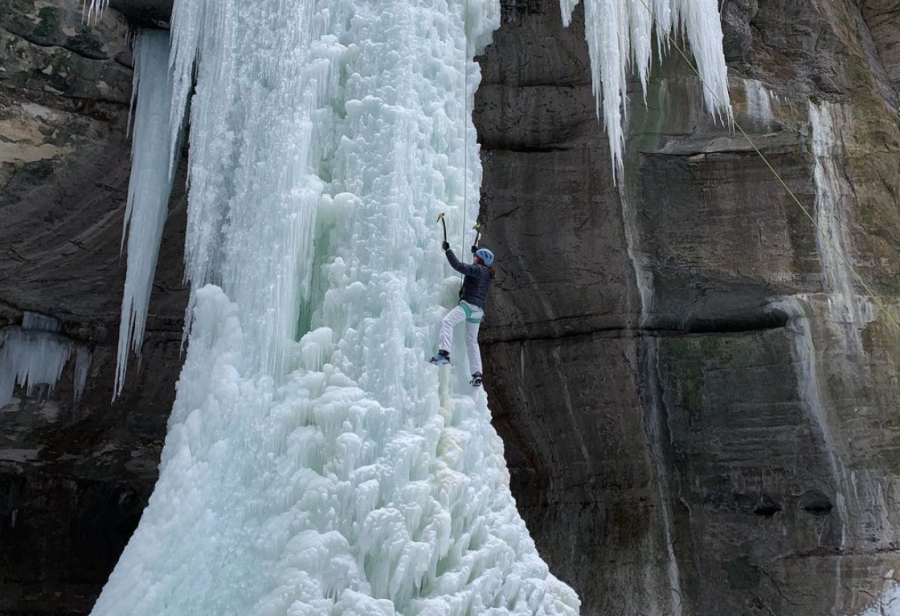 Daria Wendel belays herself while ice climbing at Starved Rock this spring. The University’s climbing club allows students to enjoy fun excursions and socialize with peers.

The University Climbing Club gives members the opportunity to interact with others who love to climb. Whether it be through adventure excursions or through social events, the Climbing Club is a community for those who are passionate about the sport.

The Climbing Club offers fun excursions. Members can climb in the Champaign-Urbana area or travel.

Marissa Cowan, a junior in Engineering, is the Technology Chair of Climbing Club. She described some of the events.

“One of our biggest events would be our Callout and that is where we take a group of about 50 new and old members down to Jackson Falls, Southern Illinois, which is in the Shawnee National Forest,” Cowan said.

The Callout event offers an opportunity for new members to engage with the current members.

“We basically would just spend the weekend camping, hanging out,” Cowan said. “We would teach people how to climb, old people would just climb some routes there, but that’s a great way for the freshmen to meet our climbers, for new members just to meet some climbers. That’s definitely our biggest event that we do. That’s kind of what brings in the most people.”

They take new members to their first kick-off event at the local bouldering center in Urbana called Urbana Boulders. With a grill setup outside, they cook burgers and hot dogs. The members are able to talk while eating together and participate in activities inside Urbana Boulders.

While the club is exciting, climbing can be dangerous. Garrett Frank, a junior in LAS and Vice President of the Climbing Club said the club ensures safety by taking certain precautions.

“A lot of times club members will be climbing at the ARC climbing wall, and there are safety procedures in place by the University there so that kind of gives people an introduction to the sport and ensures safety that way,” Frank said.

The club also has a strong focus on learning from other members. The current members act as guides to help the newer members.

Frank said that on club-sponsored events they have people that are trained, like himself, who have been taught how to do specific things by other climbing members and passed the information on as mentors.

When climbing events are outside, this mentorship is apparent.

“Whenever we have club events where we are taking people outside to climb for their first time they’re surrounded by people that have more than enough experience to make sure that whatever is happening is done safely,” Frank said.

For Frank, the Climbing Club has opened up opportunities to bond with other members who share the same enthusiasm for the sport.

“I have so many close friends that I have made in the Climbing Club, and it’s such a welcoming community that has a lot of shared values,” Frank said. “You know the nature of our sport tends to lead itself to people who are being conscientious of the impact they are having on the environment and things of that nature.”

Rose Carroll, a junior in Engineering, is a Co-Social chair of the Climbing Club.

Carroll said that while everyone is from different backgrounds and majors, it’s the passion for wanting to meet new people and being outside which makes the club unique.

“I’m an engineer so they are predominately engineering based,” Carroll said. “Being in a climbing club allows me to meet people from political science or art majors and stuff. So it really brings a big group of people together, which makes it awesome.”

Furthermore, the club also aims to make participation affordable. Not everyone can afford the proper gear for climbing. She said that when someone is a member, they have access to a ton of different gear that they can rent out.

“If you don’t have any gear yourself or you don’t want to spend money because you just don’t want to commit to that price because gear can be really expensive, the club makes it super accessible to climb outdoors because we offer that gear for you to rent out,” she said.