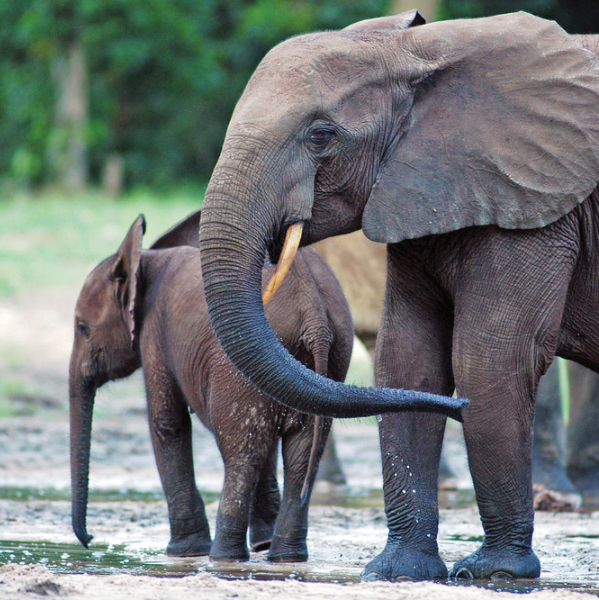 Elephants graze in the rainforest on the Dzanga Sangha Reserve in the southwestern part of the Central African Republic. University professors and researchers have pioneered nationally recognized advancements in the study of elephants.

Oceans away, mighty beasts shake the earth as they tilt their large grey ears and point their tusks forward.
University professors and researchers led nationally recognized advancements in the study of elephants, making a name for themselves in the studies of animal sciences and anthropology.
Alfred Roca professor in ACES and elephant studies expert said he has been providing evidence to prove the differences between African forest elephants and African savanna elephants.
“They’re as different from each other as humans from chimps and probably more different from lions and tigers,” Roca said.
Until recently, the International Union for Conservation of Nature officially recognized the two different species. This especially helps forest elephants, whose population has declined by more than 86% over the past few decades.
“I just hope it’s not too late,” Roca said.
While savanna elephants are also endangered, their population has only declined by less than 60%. Roca said forest elephants are more at risk of extinction due to their slow reproduction rate: they wait six years longer than savanna elephants to reproduce.
Forest elephants are also more susceptible to poaching because Roca said the ivory in their tusks is easier to carve and they tend to live in unprotected areas.
When the Union recognized the difference between the two species of elephants, it increased the chances of conservation efforts for forest elephants, Roca said. However, the endangerment of forest elephants doesn’t only affect them. It also puts indigenous trees at risk.
Students at the University who haven’t studied animal sciences said they are still aware that elephants are endangered.
Sophia Diaz, Freshman in LAS, said she’s upset by the lack of activism to save elephants and argues that any research to help them is time well spent.
“I’m very disappointed with how everything has been handled,” Diaz said. “There’s not a lot of action being done for elephants because I know there’s a lot of trafficking being done for their tusks. I know that they’re about to be extinct.”
Roca and his colleagues examined elephant tusks found in the wreckage of the Bom Jesus, a ship found off the coast of Namibia that was used for trade in the 16th century.
In the conclusion of their research summary, the team said, “our interdisciplinary methodologies revealed the long-term genetic diversity and habitat use of the African forest elephant, helpful for conserving this iconic species.”
By extracting DNA from the ivory, Roca and his colleagues were able to determine the origins of widespread poaching of forest elephants.
Roca’s colleague, post-doctoral student Alida de Flamingh, said the process to remove the DNA from the ivory is daunting. However, their research provides the blueprints for future investigations using DNA extraction of ivory.
“The study provides a method or protocol for analyzing these archaeological artifacts specifically ivory in this case,” de Flamingh said. “This protocol and this approach can be used for other types of ivory as well.”

Before entering the laboratory, de Flamingh had to put on protective gear and spray herself with chemicals that kill any DNA on her person. This is so researchers are certain that the DNA extracted is from the ivory. The ivory was sent to the University from the University of Cape Town, South Africa. Illinois has one of eight ancient DNA laboratories in the country.
The drama of a shipwreck and the significance of endangered elephants is something de Flamingh said would attract students to the study.
“I think one of the things that this research shows is that science can be used to answer really cool questions,” de Flamingh said. “Everybody is interested in shipwrecks and loot within a shipwreck and everybody loves elephants. Who would’ve thought that you could determine where elephants that lived 500 years ago came from?”
De Flamingh is originally from South Africa but came to the University after emailing Roca and seeing the elephant studies programs.
“When I was in South Africa, I was studying elephant genetics,” de Flamingh said. “There aren’t really elephant genetics professors in South Africa, so for my master’s, I really struggled to find people to help me. While I was doing my master’s, I kept citing articles by Roca.”
The team conducted research abroad in addition to utilizing campus resources. They traveled to the National Museum of Namibia and the University of Cape Town, South Africa to collaborate with others.
While there aren’t any elephants in the United States, de Flamingh said Illinois has much better facilities to study them than their peers abroad.
One of the biggest takeaways de Flamingh said was teaching their partners in Namibia and South Africa how to analyze the DNA in the ivory and helping them expand their facilities.

“I feel extremely passionate about showing people that don’t have the same opportunities that I had for my Ph.D. that those opportunities are out there,” de Flamingh said. “One of the good things that came from this project is it provided the funded opportunity to go to South Africa and share these analytical techniques which would be extremely helpful.”
In the future, the team plans on continuing its ivory analyses. However, they plan on examining other animals such as walruses and rhinoceros.
Although de Flamingh can’t share any specifics, she said she is looking into working with the Field Museum in Chicago.