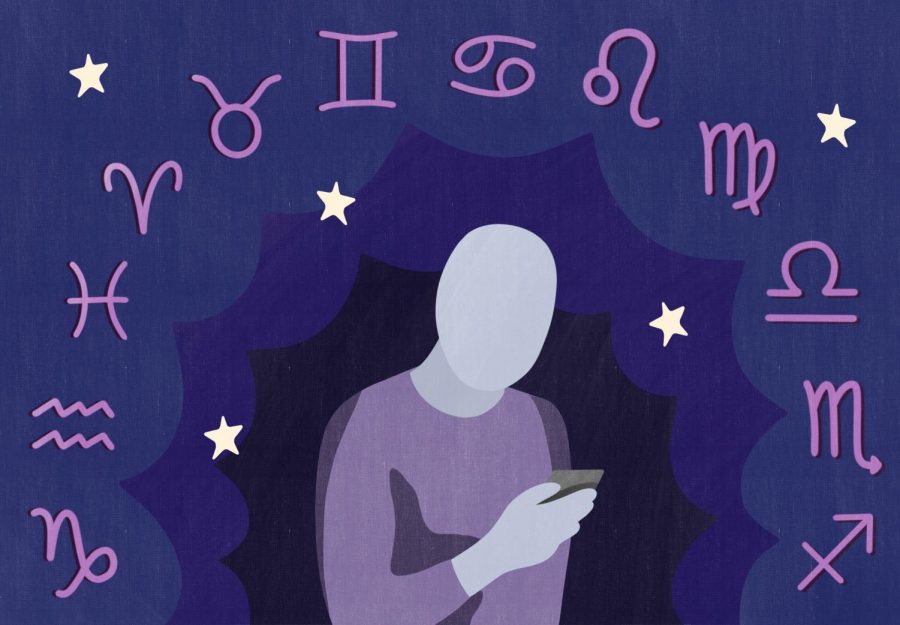 Taylor Cianci, sophomore in LAS, is a Virgo; according to her, Virgos are reliable, organized, reserved and just a little bit too critical.
Cianci’s interest in astrology sparked at a young age when she developed an interest through her mother, who has been interested in astrology for as long as Cianci can remember. They’d discuss their zodiac signs and horoscopes over the dinner table.
Then, in 2018, Cianci downloaded Co-Star, the then-latest trend in astrology. Designed with simplistic black-and-white style and a user interface mimicking a social media site, Co-Star is a horoscope app that allows users to connect with friends and view their birth charts.
“In times where I was going through something, I would really listen to (Co-Star) because I would rely on it to make me feel better like maybe this is what I should do,” Cianci said. “There are times where it has been scary accurate on my home screen and I actually rake through the whole thing and take it into account.”
According to Co-Star’s website, the app uses artificial intelligence that merges NASA data with the insight of human astrologers. Far from the days of checking the morning newspaper for one of twelve generic horoscopes, Co-Star asks its users the exact time and location of their birth to tailor its experience to every individual user.
Apps like Co-Star have grown in popularity over the past few years, especially among college-aged students. According to Business Insider, revenue for astrology apps has grown over $40 million per year. However, some astrology enthusiasts believe Co-Star is more focused on being a social-media brand than an astrology guide. Recent criticism and dissatisfaction with the app has led some of its users to delete it from their phones.
Esther Phipps, sophomore — and Pisces — in Media, got into astrology during her freshman year of high school after hearing people discuss it on the microblogging site Tumblr. Phipps used Co-Star for a short time during the peak of its popularity but stopped using the app after allegations that the Co-Star’s founders would purposely send negative horoscopes to ‘troll’ their users.
“Co-Star is run by two young women, and the app is super aesthetic; it’s super geared towards how you can add your friends and see what their horoscope says,” Phipps said. “Every day, they will send out like ‘This is your new daily horoscope,’ and on video, the two founders of the website/app were like poking fun and saying ‘Yeah we lie all the time, just for fun.’ They just admitted to lying about peoples’ horoscopes, which may be funny to people who aren’t all that into astrology, but for some people that live their life by it, it’s just rude.”
Rebecca Eng, senior in LAS, is a practicing Pagan, identifying most with Wicca, a form of modern Paganism. As part of her spiritual beliefs, astrology plays a large role in divination, which according to Eng is the “ways of procuring desired information than our conscious minds can not immediately discover or compute through communicating with the subconscious.”
Eng downloaded Co-Star and almost immediately deleted it. She was born on the Pisces-Aquarius cusp and felt that the app pigeon-holed her as a Pisces, whereas she finds predictions for Aquarius horoscopes more helpful.
Eng also said she believes that Co-Star, and other astrology apps, commodify a spiritual practice to many. Still, she recognizes that apps like Co-Star may give guidance and help people gain a sense of direction, despite its shortcomings.
“It commodifies Pagan beliefs a bit by turning it into a fun trend,” Eng said. “I think many people are going to be a bit annoyed when you turn a special interest or something personal into something that’s mainstream, and I’m not above that. However, astrology has been a fad for a while now and more and more people have been growing disillusioned with organized religion, — understandably so — and turning back to Pagan religions, which have been stigmatized ever since Abrahamic religions became widespread. As such, I can’t complain. And if apps like CoStar allow people to make note of the synchronicities in their own life or gives them a sense of empowerment, guidance or direction, who am I protest?”