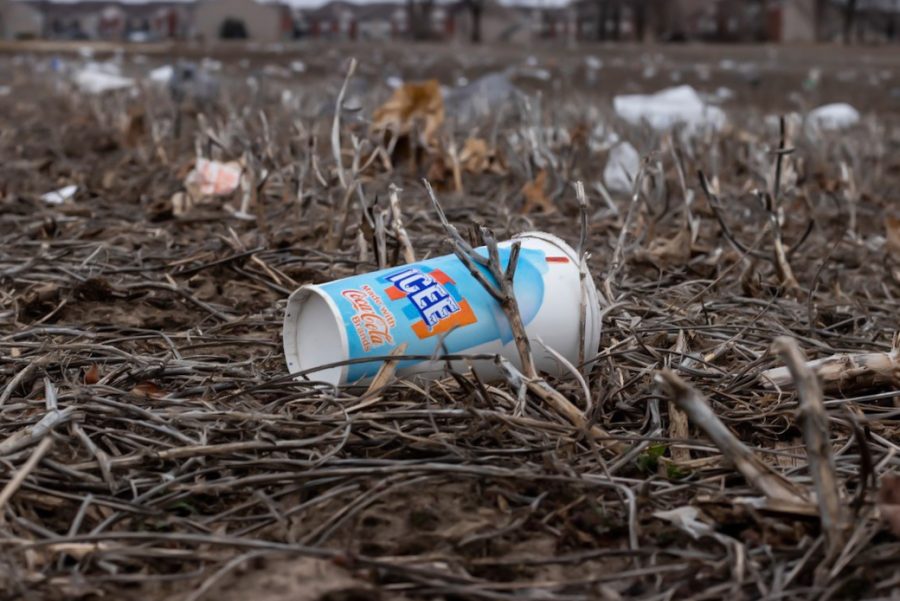 Trash is scattered along an empty field on March 9, 2020. People are unfortunately leaving their trash on the ground instead of throwing out or recycling the item.

Some people associate Earth Day with fifth grade macaroni art projects to be put on the fridge for a week. Many take the day to admire nature and weather. It’s also a time to acknowledge the need to recycle. The United Nations General Assembly warns of the urgency needed to prevent irreversible damage from climate change.
In the United States, recycling isn’t enforced. Some people recycle. Others don’t. Some people don’t even know what can be recycled.
“In terms of recycling, although much of it is sorted, most of it probably doesn’t get recycled,” said Nicole Park, sophomore in ACES and LAS. “I wish it was more transparent what can and can’t truly be recycled.”
Recycling seems to be universally agreed upon as a beneficial practice, yet the execution seems to be upsetting to many. The U.S. Environmental Protection Agency estimates that, out of the 75% of the yearly waste stream that is recyclable, only about 30% is actually recycled. Americans generate 21.5 million tons of food waste alone each year.
The University has made public efforts to promote recycling and has more than 3,000 recycling bins in campus buildings for paper, plastic bottles and aluminum cans, as well as a newspaper and cardboard drop-off location at the southeast corner of Oak Street and Kirby Avenue in parking lot E14.
Asking students about their habits can reveal ways recycling can be promoted more effectively.
Eric Chung, freshman in Engineering, admits he is somewhat passive about recycling.
“If I accidentally put something in the trash, I don’t really care about that,” Chung said. “But I do try to at least recycle. What I could do is be more conscious about the trash that I throw away and how to separate them.”
Tyler Livingston, freshman in LAS, said he could put more effort into recycling as well.
“I definitely (recycle) when given the option and it’s easily accessible to me, but I could do more,” Livingston said. “There’s definitely parts of the dining hall where recycling accessibility is somewhat limited.”
Students like these are not alone in their passive, non-urgent behavior when it comes to recycling. But many who actively have recycling on their minds, like Collin Barns, freshman in LAS, have thoughts on counterproductive activities by the University when it comes to reducing waste.
“In my dorm room I recycle, but like the things I get from the dining hall — a single-use pack of non-reusable utensils for every meal — is depressing in how much waste I generate because I don’t really have a choice,” Barns said. “The dining hall is the worst offender.”
There are students who prioritize recycling, even in the trappings of pandemic dorm life. Jonathan Augustus Albrecht, sophomore in LAS, offered ways to recycle more effectively.
“I recycle in my room,” Albrecht said. “I have a special container for paper recycling since they don’t give us an extra container and I’ve used the one they do give us for plastic recycling.”
Albrecht said students who want to actively recycle should obtain a third container outside of the two provided in dorm rooms to help the sorting process of different recyclable materials.
“Separate your cardboard and plastics ahead of time,” Albrecht said. “When I was a student last semester, I didn’t do that and it was a nightmare. This year I stepped up and brought two separate containers. Housing needs to give us three containers. Trash, plastics and paper. They separate them at the dining hall, but we need to separate them in our rooms too.”