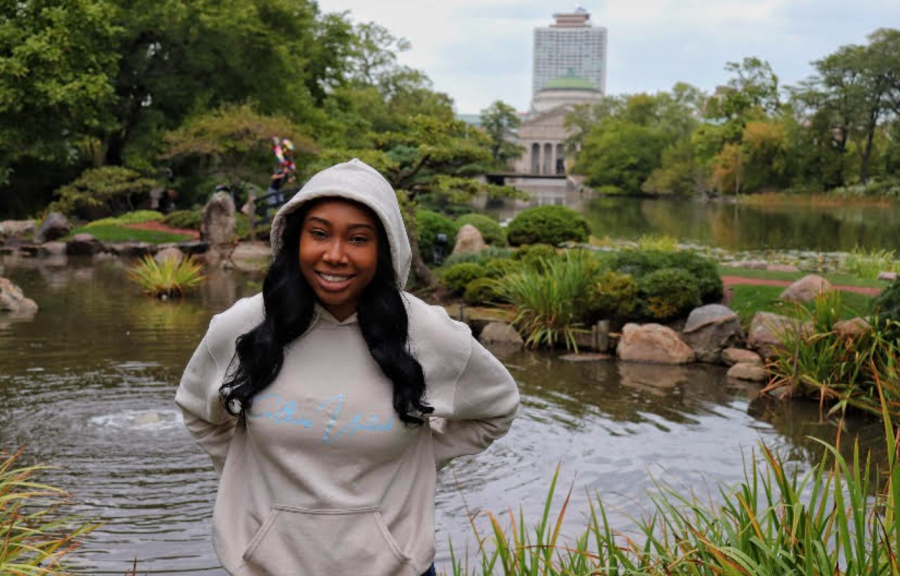 Arianna Williams, founder of Cre8tives United, poses for a photo wearing Cre8tives United merch on Oct. 3, 2020 at the Garden of the Phoenix in Chicago, Illinois. The group creates a platform for smaller artists to tell their origin stories that will help them gain more traction in the industry.

Arianna Williams, sophomore in Media, grew up surrounded by music and always knew she wanted to write. She combined these interests when she founded Cre8tives United in 2019, which she calls her brand.

Cre8tives United represents Williams’ own artistry as a music journalist while also highlighting the work of other creatives. So far, she has featured more than 20 artists.

Her inspiration to found Cre8tives United began when she spent long hours with RSO W.O.R.D, or Writers Organizing Realistic Dialect, during her freshman year. She recalled Hell Week, during which performers would practice reciting their pieces every day in preparation for shows.

“I’ve seen how much work artists put in for their work, and I put in the same amount myself,” Williams said.

Many of the artists she’s written about do not have large public platforms, so Cre8tives United is a place to start and what she calls the beginning of their origin stories as artists.

Devon Fields, known professionally as D-Vo (Spotify, Apple Music), was the first artist to be highlighted by Cre8tives United. Fields is a musician and conceptual hip-hop artist from Chicago and a sophomore studying music at Columbia College Chicago.

Fields said he is inspired by Kendrick Lamar and Kanye West and often discusses mental health in his music.

“Most guys grow up not being able to share their feelings – we’re just kind of taught that,” Fields said. “So I think the one way I was really able to get through to myself and have a breakthrough was starting to write how I feel in raps.”

Fields is a longtime friend of Williams who helps connect artists with Cre8tives United.

“There’s no outlet for the little guy,” Fields said. “There’s all these publications and we know about the huge celebrities; we know about the Drakes in the world, the Ariana Grandes, but there’s not really too many people that’s looking out for the people like me or everybody that’s in my circle that’s trying to make it out.”

Williams said she wants Cre8tives United to become a magazine like Ebony or Jet magazine. She also pointed to Cole Bennett’s multimedia company Lyrical Lemonade, which has directed music videos for prominent artists like Juice WRLD and started as an online blog.

Jamal Coleman, sophomore in AHS, is a brand ambassador for Cre8tives United. Also a friend of Williams, he has supported the brand since it was just an idea and said it builds a community for artists.

“You can always count on somebody to get something done, or you can always look to somebody and say ‘Hey, I just dropped a song’ or ‘I just came out with this clothing brand” or ‘I just made this piece, could you share it?’” Coleman said.

“It doesn’t matter what type of art you have – if it is an art to you, it is art and you are a creative,” Coleman said. “Whatever that talent or that creative idea is, somebody should see it.”

For Williams, Cre8tives United is a place where creatives are immortal.

“No matter what happens, (art) is a piece left on this earth and it’s there for somebody to touch it, to hear it, to read it,” Williams said.