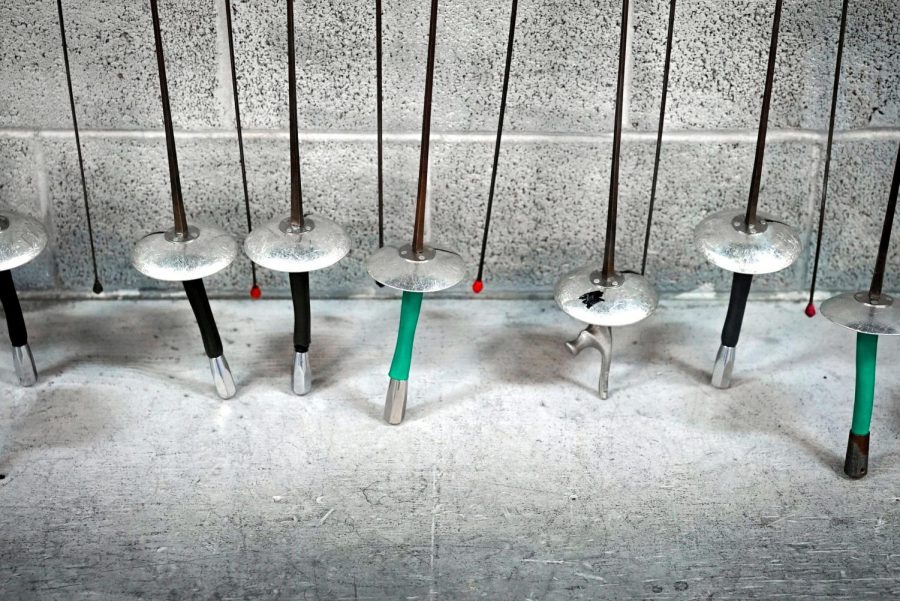 A multitude of fencing swords line the wall at the Point Fencing Club & School in Urbana, Illinois. The club has struggled since the beginning of the pandemic but hopes the summer will bring more members.

Every summer, children gather at summer camps to play games, hone their sports skills or learn more about nature.
When Liz Feller’s mom told her that she had to attend an athletic summer camp, she wasn’t thrilled. She much preferred reading books until she saw a flyer that said something along the lines of, ‘Come Play with Swords!’ From then on, fencing became a huge part of her life.
“Fencing is honestly one of the best things in my life as a sport and as a community,” Feller said.
Feller has been fencing for 14 years and is a fencing coach at The Point Fencing Club & School in Urbana. The club accepts all skill levels and can be a place to practice and meet new friends.
Club Manager, Kelly Hill, said that it’s been hard for them during the pandemic. At first, they had to completely shut down and they have gone from about 60 members to 15.
“We’re a membership-based group so when people are not fencing they’re not paying a membership and so there’s just no income,” Hill said.
The club was able to get financial support from a former Illini Fencer and co-founder of the club, Michael Vitoux.
Hill said that they are following COVID-19 guidelines by wearing masks, practicing outside and opening back up slowly for their members, but like many other organizations, they are still struggling.
While they have had to change a lot of logistical aspects of the club, Feller said besides having a bit of your vision obstructed by having a mask under your fencing mask, the sport adapts pretty well to the pandemic guidelines.
They are hoping that things will start looking a little better in the summer, in terms of what they can do and in membership numbers.
“We look forward to the rebuilding and rebooting happening gradually,” Hill said.
In addition to the decrease in members, tournaments have been cancelled.
Martin Bohn, president of the club, went into fencing with his son. He grew up in Germany and saw how a lot of people loved the sport and thought it would be a good father-son activity.
Fencing is popular in Europe and the west and east coast of the United states, but not so much in the midwest.
“Fencing is an outlet for me to exercise my body and that is very important because I really believe and I experienced that only through a healthy body there is a healthy mind,” Bohn said.
While keeping his mind and body sharp, Bohn said fencing taught him how to be in the present moment. When fencing, Bohn said all of his problems disappear and he becomes super focused on what is going on around him.
He compared it to a chess game, where you have to be aware of everything going on at the same time.
“You have to be in the moment if you want to be successful,” Bohn said.
Bohn said he found himself doing online fencing classes when everything first shut down. He said the fencing community was really trying to stay strong and create a sense of normalcy.
While fencing is physically demanding, Bohn loves the mental aspect of the sport: reacting fast, reading your opponent and making a move.
“When you are on the strip and you have to compete with another person you try to dominate that person,” Bohn said. “You try to make the person make mistakes and try to move the person into a situation where they are not able to respond anymore. You also have to remember that the other person is trying to do the same thing to you.”
Bohn said when everything comes together, fencing is a beautiful form of expression.
“Fencing is a way of life,” Bohn said.