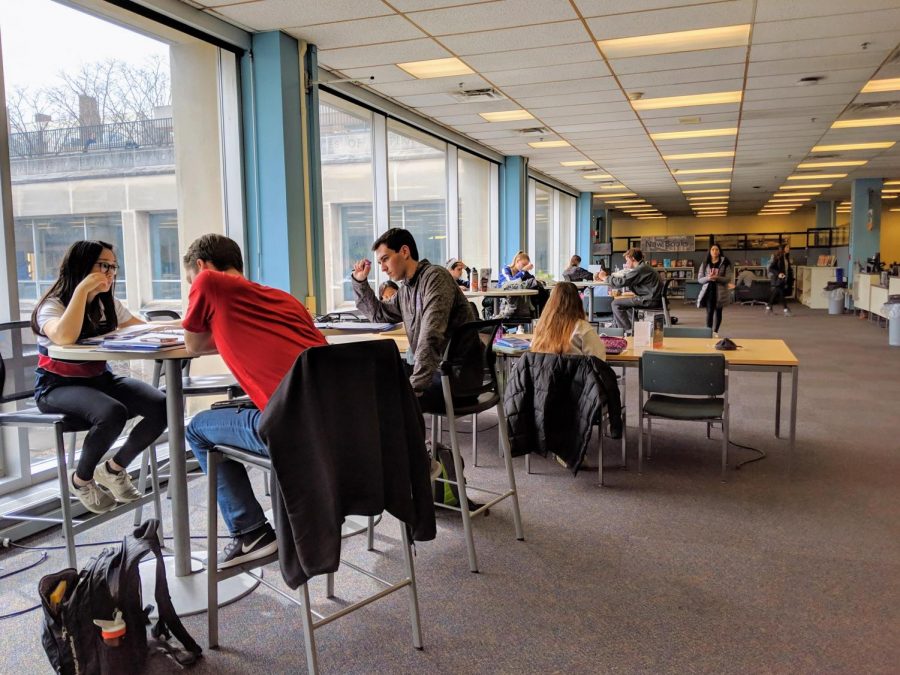 Students study at the Undergraduate Library on March 12, 2019. Students must weigh between choosing a major based on their passions or monetary concerns.

When high school seniors apply to colleges, they are faced with the question: What should I major in? While the answer can change throughout one’s time studying at the collegiate level, many students enter college with a general idea of what career that they plan to pursue.
As students decide their future careers, multiple factors are taken into consideration. A primary conflict for students when picking their major is whether to pursue a career based on what their passion is or what will provide them future employment and financial security.
Like any university, some students choose their major based on their passion and love for their prospective field. When deciding her major, Grace DeGroff, freshman in Business, wanted to pursue a career that would allow her to help others.
“I guess what really drew me to it is that my whole life I wanted to do something in medicine to help people since that’s what I thought was the only way to give back,” DeGroff said. “Then, I did not do well in organic chemistry and I decided that was not the path for me. Then, in high school I was involved with a philanthropic organization, and I just decided to do business because I could easily align that and gain skills within the business school and then work at a philanthropy or non-profit group.”
While deciding on a major, Caleb Lair, junior in LAS, decided to pursue a dual degree that combined two of his passions.
“I’m double majoring in physics and astronomy, so I can go on studying astrophysics,” Lair said. “Certainly gazing at stars and pondering the universe is really cool, but more than that I love math, physics, astronomy and even computing now so my majors make total sense for me.”
Similar to Lair, other students go on to pursue dual degrees that combine both passion and future financial security. Jessica Foster, junior in LAS, is pursuing a degree in English and East Asian Languages and Culture.
“I’m honestly in my majors for passion,” Foster said. “I love literature and writing, and I have been interested in East Asian geography and cultures since high school, so yeah I think it’s more so passion for me.”
While some students pursue their majors based on their passions, many students decide on their major based on future financial stability, even if they are not passionate or confident in it. In a 2019 study by Ellucian, 52% of Generation Z students are confident in their career path when they enroll in college.
“Whenever somebody asks me what I want to do in the future and I say ‘I want to work at a non-profit or philanthropy,’ they’re like ‘Oh that’s so amazing. I wish I could do that, but I want money,’” DeGroff said. “It is so sad that some people are in certain organizations, and they are setting themselves up for 80-hour work weeks for two or three years just for the money —and I’m just wondering why.”
According to a recent survey conducted by Federal Reserve Economic Data, about 7.2% of recent college graduates were unemployed in the U.S. in March. This percentage has increased recently due to the COVID-19 pandemic, but these rates can support one’s decision on whether or not to pursue a major based on passion or financial gains.
In the 2019-2020 annual Illini Success report of 4,630 students, it was reported that 48% of them were employed and 9% were actively seeking employment.
Despite the relatively high rate of unemployment for recent college graduates, Lair isn’t worried about future job prospects while pursuing a passion-based career.
“I’m unsure if I want to work in academia or in the government sector,” Lair said. “Either way from what I’ve read, most stay in the field of astrophysics but many also find success in other fields, so I’m not concerned about not finding a job.”
While every student has the choice to pursue whatever major they want, many students at the University have demonstrated interest in their field due to passion.
“I want to wake up in the morning and have something that I look forward to with my job,” DeGroff said. “I don’t want to hate it.”