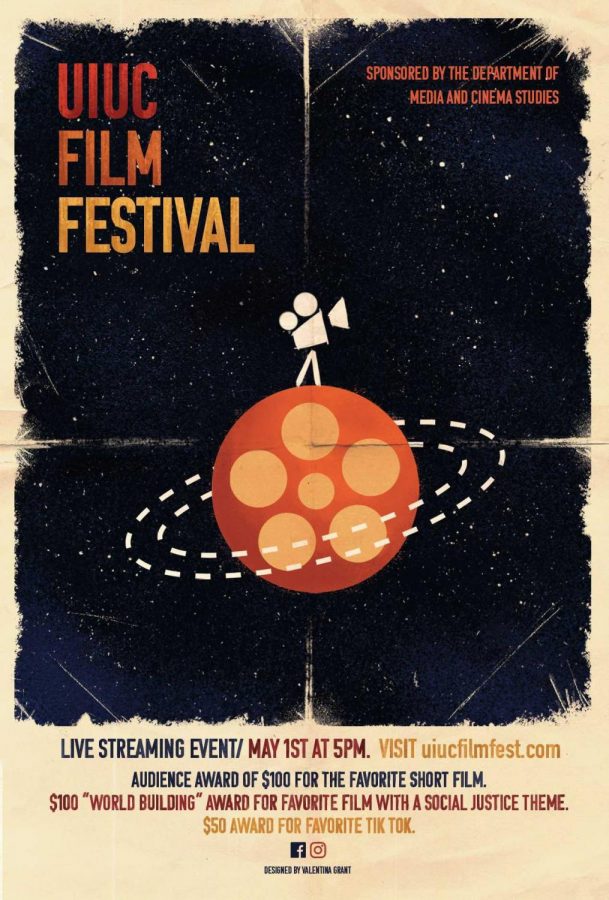 The UIUC Film Festival poster is shown above. The event will stream online May 1st.

The extended absence of big movie releases has caused studios, theaters and film festivals to find other ways for audiences to see their next big movies. Those involved with the UIUC Film Festival, however, used their time a little differently; they worked to rebrand the festival and give students the chance to share the visions they have developed throughout the pandemic.

The UIUC Film Festival, formerly known as the Illini Film Festival, is an event where students in the class MACS 464: Film Festivals organize, promote and execute screenings for filmmakers’ finished projects.

“MACS 464 as a class, we get together and we handle the promotion of the festival,” said Jacob Mayer, senior in Media. “We also do the programming for it, selecting which films go in what order and the general management of the festival happens throughout that class.”

Mayer helped with copyrighting for the festival and also promoted it via social media.

One of the students in charge of the festival’s social media accounts, Eleni Sakas, sophomore in Media, explained the amount of work that went into social media posts and audience outreach.

“There’s a lot of planning and organizing that you just don’t take into consideration, like the times you post stuff on social media,” Sakas said. “You don’t want to bombard people by posting every single day but there are specific times you have to post.”

On top of promotion, MACS 464 students were also in charge of the rebranding for the festival, such as creating a new design for the website and making a new logo. This created challenges that the students were eager to tackle.

One of the designers for the festival, Valentina Grant, junior in FAA, spoke about the process of designing a new poster.

“There were definitely tweaks we needed to add, but I was really excited and happy when it came out,” Grant said.

She expressed her delight in seeing the fruits of hard work throughout campus.

“Jonathan Knipp (MACS 464 professor) sent me a picture of my poster in Gregory Hall, and it was surreal,” Grant said.

She said being involved with the festival was a very fun experience.

“I think joining this film festival gave me overall a better experience of what a film festival can do and a moment to collaborate and produce and contribute to films,” Grant said.

Mayer mentioned his own excitement in being a part of organizing such an event, as well as giving filmmakers the opportunity to share their visions.

“Personally, it’s really exciting to have your name attached to a festival,” Mayer said. “And submitting to festivals is something a lot of filmmakers can do, but it’s great to have one in your own community on campus as well.”

“I know the idea to change the name happened before the pandemic,” Mayer said. “But it was serendipitous timing.”

From creating a new logo to adding TikTok submissions for the festival, MACS 464 students implemented as many ideas as they possibly could to make the UIUC Film Festival stand out from previous years.

Sakas described an idea of hers to pass out flyers with a QR code that links to the UIUC Film Festival website, which she had to scrap because of the pandemic.

However, she explained another idea that the class implemented, which was to create a separate submission and viewing for TikToks in the festival.

“A lot of people make TikToks now, because we’re like ‘Why not?’ and that’s been easier for me to explain to people, like, ‘You don’t have to make a documentary, you can just send me your TikTok username and that’s OK,’” Sakas said.

There were moments of difficulty in the organization of the festival, such as miscommunication in Zoom meetings, difficulty reaching fellow classmates and initial struggles to find an audience for their social media, but MACS 464 students believe they have been able to overcome these challenges together and will give the campus one of the best film festivals to date.

The UIUC Film Festival will be streaming on uiucfilmfest.com on May 1 at 5 p.m.