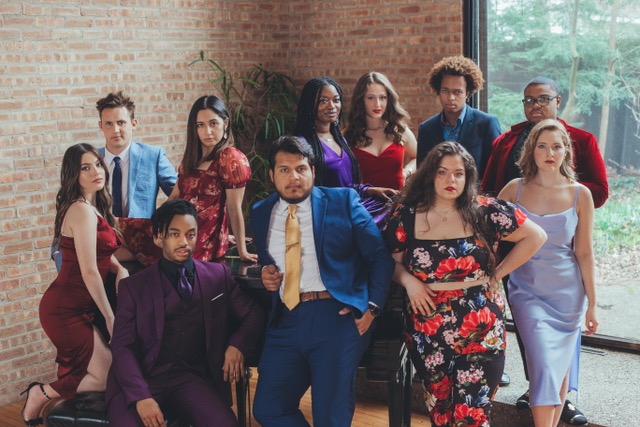 Seniors in the University’s Bachelor of Fine Arts acting program pose for a photo. The group is set to perform at the BFA Showcase which will start streaming online today.

Broadway’s lights have been off for one year and one month. Broadway.com announced the cancellation of all shows due to COVID-19 on March 12, 2020, and the news struck theater kids and arts lovers everywhere.

This forced those involved in performances and other live forms of entertainment to either cancel their shows or think of COVID-safe ways to perform. Though this has been quite the feat to take on, if anyone can think of creative ways to perform in a pandemic, it’s the theater kids.

The seniors in the University’s Bachelor of Fine Arts acting program know just how difficult this has been. They are currently gearing up for the UIUC BFA Showcase, which streams Wednesday.

“The 11 of us who have been doing the showcase, we’ve been in this program since freshman year,” said Charlee Amacher, senior in FAA. “This is a digital presentation for those who want to see our work.”

Amacher said the showcase will consist of different scenes, monologues and songs all performed by the 11 senior acting majors. The showcase used to take place in person in Chicago, and students across the country would gather to perform and invite casting directors, agents and industry professionals to experience the showcase. But like a multitude of other events within the past year, the showcase was moved online.

Though few experiences can match the energy of live theater, Amacher said that this digital format allows people to attend who might not have been able to make it to the live showcase.

“It’s a chance for us to be represented, not just within the Chicagoland area but also with agencies, directors and casting people in New York, Atlanta and L.A.,” Amacher said.

Though the pandemic has led to easier viewing and accessibility for viewers, Amacher said it also significantly impacted her motivation and experience performing in shows. She said that Zoom took away from a lot of the fulfillment that live performances provide actors.

“It was really hard because theater is very collective,” Amacher said. “Theater’s very much community-based, so being on Zoom kind of took a little distance from that. It was just so heartbreaking to see. Yes, we put on a production and I’m so grateful that we did it, but it’s just like ‘Oh, if it was only in person, how amazing that would be.’”

The lack of in-person performances has had an effect on audiences, too, and if you’ve ever been to a live show before, you might have experienced leaving a breathtaking performance with goosebumps and the fleeting thought that maybe you could even be in a show one day.

“When you’re in an audience you are having a shared experience,” Nisi Sturgis said. She’s an assistant professor of acting in the Illinois theater department with a focus on acting for the camera, and she’s worked closely with the seniors to help them prepare for the showcase.

“We are people that really rely on presence, of it matters that you’re here, and so I think, for us, not being able to gather was a real blow,” Sturgis said.

But Sturgis also speaks to the will and dedication of artists and said that COVID-19 forced artists to do what they do best, which is problem solving and storytelling. She said that artists “have huge hearts and big imaginations,” which is why people like the senior BFA acting students have pushed through the difficult year and came together to create this showcase.

For those not sure what to expect from the showcase, Sturgis gave a hint: “power, humor and the dynamics of what it is to not be silenced.” She said these students refused to give up and step down from the hard work the showcase required, which she said is a huge success.

“When you are with an artist of quality, at the end of spending time with them, your spirit is filled, not depleted,” Sturgis said. “And each of these individuals found that within themselves and shared it as an ensemble, and that impact is something to be reckoned with.”

These students have been preparing for this showcase since they were freshmen, and both Sturgis and Amacher reflect on how far the students have come in the past four years.

Amacher said that throughout the past few years, she’s not only grown as an artist and actress but as a person as well. She said she feels more confident now and that she’s not as worried about people-pleasing or being the “right actor.”

“There’s no such thing as the right actor,” Amacher said. “It’s just a matter of who can incorporate themselves into their work and be honest with the work.”

Sturgis reflects on the political climate in 2016, when the current seniors were being recruited. She said that she felt that the country was very divided, and she praises the fact that the seniors were able to stick together and push through the division and still grow in their craft.

“The fact that they have held fast to one another and had growth as artists and individuals is astonishing, and it’s something for them to be proud of,” Sturgis said. “It shows that showing up every day, asking the hard questions and listening to each other, even when you think you have nothing left to offer, sometimes that’s enough.”