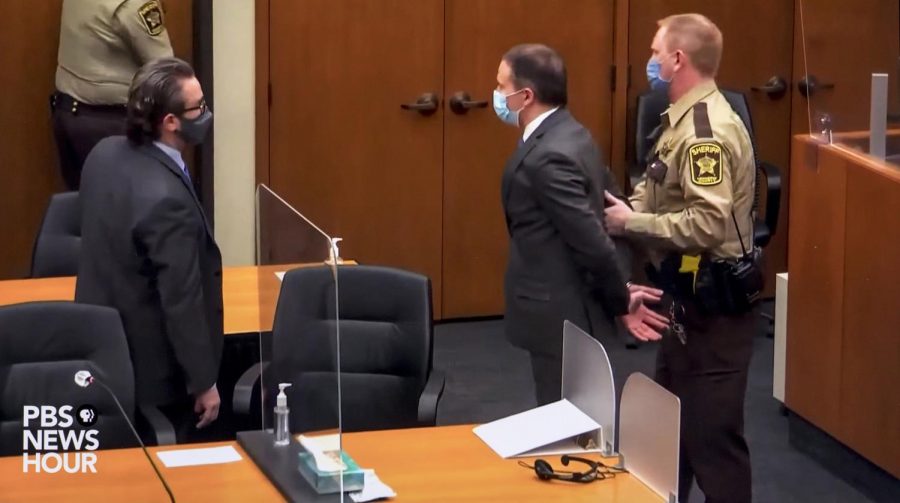 Former Minneapolis police officer, Derek Chauvin, is handcuffed and taken into custody after being found guilty of all charges in the death of George Floyd, in Minneapolis on April 20. The Black Lives Matter movement gained a lot of momentum following Floyd’s passing.

On May 25, 2020, the murder of George Floyd sparked protests all around the world against systemic racism in police. Derek Chauvin, the ex-police officer who knelt on Floyd’s neck and prime suspect in the case, was charged on three counts of murder and manslaughter and was finally put to a public trial.

The entire world followed the court proceedings with anticipation as the days progressed and multiple witnesses were seen being brought in by the prosecution and defense. This case had a deep impact on the Black community who have a long history of dealing with systematic racism and suppression.

When the the words “guilty” rang on televisions throughout the world and the image of Chauvin getting taken away replayed on multiple news networks, many emotions surfaced.

Faith Nolan, graduate student and member of the National Organization of Minority Architecture Students, said that with the climate of the country and the history of trials in the past, she truly didn’t know how everything was going to end.

“I feel like everyone was at the edge of their seats with this,” Nolan said. “The fact it lasted so long made people nervous, including myself.”

Nolan said she felt that for most, seeing the trial unfold was mentally taxing.

Kayla Brothers, President of the Black Greek Council, said that when she saw posts saying “guilty” on social media, she was nervous since justice has never been served. She said cops have never been to sent jail — only given probations. When the witness doctor declared the cause of death was asphyxia, she said she felt like she wasn’t being tricked and that the doctor was on their side — giving her hope.

Sydney Bell, sophomore in LAS, said she wasn’t alone in her surprise for the guilty verdict and the conviction.

“Everyone went to the trial expecting the worst basically, because we have seen the same outcome time and time again, thus we thought he would be not guilty,” Bell said. “As more articles and evidence surfaced, more people gained that he will be actually charged and everyone was surprised that he was charged on all three counts.”

Bell emphasized how she thought that communities need to do more. She strongly feels the University and RSOs should offer more resources to their Black students.

“Being Black is a lot to take in,” Bell said. “It would have been nice to see the University at least doing more to acknowledge this for their Black students because it is one thing to see the killing of a Black individual on your timeline, but you keep seeing it over and over again.”

Bell said one of her professors acknowledged the stress students faced surrounding the trial and gave accomodations.

“My chemistry professor pushed back the due dates on the week of the trial to give everyone a mental break from the trial and acknowledged how emotionally strenuous it was,” Bell said.

Even with the conviction of Chauvin, Black students remain skeptical of future rulings related to police brutality against the Black community. Although justice was served in such a historic event, Nolan thought that it was unfortunate that it happened in the first place.

“We shouldn’t be happy with the bare minimum,” Nolan said.

Brothers said she thinks change needs to be made at a more local level. She said that although positive things have come out of this trial, Black people are still getting killed, leaving a need for internal change within these institutions.

“When it comes to patrolling and policing the actual campus, there have been racially motivated events,” Brothers said. “There have been issues where favor was shown to other students and there was the opposite for minority Black students.”

Many find it questionable if a future precedent has been set by the Chauvin trial. Bell said she feels that people are supposed to have faith that things will have a just outcome — but unfortunately, that hasn’t been the case for a majority of these cases.

“This is America and racism is basically rooted,” Bell said.

The Black Lives Matter movement gained a lot of momentum following Floyd’s murder and Bell said that the movement needs to maintain its pace.

“I hope more things are done but it seems like people only talk about BLM and police brutality only when something happens,” Bell said. “I’d like to see the topic being discussed when nothing is happening. We don’t have to wait for another killing to happen.”