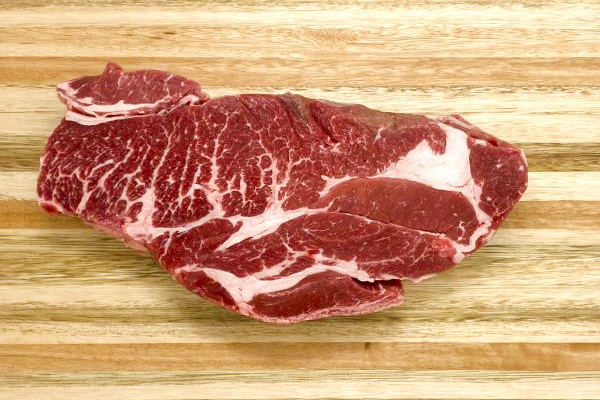 A frozen boneless beef chuck roast sits on a wooden cutting board in the Universities Meat Science Lab. The lab supplies local residents with different kinds of products that are harvested from the University farms south of campus.

By Alex Lazaro, Contributing Writer
May 1, 2021

The Meat Science Laboratory has been referred to as a hidden gem of the Champaign-Urbana community for some time now, supplying the local residents with different kinds of products that are harvested from the University farms south of campus. These farms are managed by the Department of Animal Sciences and they are overseen by students and professional staff.

Ben Peterson, alum from the University’s class of 2016 and manager of the meat lab, specified the types of products that are sourced locally.

“We harvest cattle, pigs and lambs,” Peterson said. “Poultry products are actually harvested down in Arthur, Illinois. They are packaged down there, and then they are brought to us to sell. Eggs come from the U of I poultry farm, and we sell those by the flat.”

The Meat Science Laboratory staff makes sure to follow strict guidelines as there is a zero-tolerance rule for mistreatment of the animals.

“We are a federally inspected plant — a USDA and FSIS inspected plant,” Peterson said. “We have an inspector here everyday, especially on our kill days. They make sure we are humanely harvesting the animals.”

A team of inspectors and veterinarians carefully check the animals to make sure they are safe to process, determining whether they go into the food supply or not by checking for physical signs of illness. Once the animals are processed, the internal organs are inspected as well to determine if the meat can be sold to consumers.

The carcasses are stored in a specialized cooler set to a range of 32℉ – 34℉ that is meant to rapidly chill them to ensure the best meat quality. The average amount of  time for a carcass to spend in this cooler is 24 hours, but some carcasses are aged longer, depending on the type of meat that the carcass has.

Once the carcasses have been aged to their ultimate pH level, which determines visual appeal and good meat quality, the carcasses are moved to the cutting room. The carcasses are broken down into their primal cuts, a piece of meat separated from the larger carcass.

“For the most part, across the three species of pork, beef and lamb, the primal cuts are shoulders, loins, legs and basically bellies,” Peterson said.

The primal cuts are then broken down into subprimal cuts, which are the pieces of meat that can be bought at local grocery stores or butcher shops. Peterson said that these types of cuts are products such as pork chops, ribs, steaks, ground beef, sausage, ham and much more. The meat goes into a smoke house after it is cured so that it is a safe product able to be stored for a long period of time.

Peterson said that each meat product has a specific procedure that must be followed to ensure it is handled properly, from processing to storing it, known as the Hazard Analysis Critical Control Points. The staff must maintain records to ensure that these steps are being followed correctly.

Once the meat is ready to be sold, it is packaged and the inventory on the Meat and Eggs Sales website is updated. Customers are able to select the products they would like and a curbside pick-up time for their purchase.

Although the main consumers of the meat lab are residents of the Champaign-Urbana community, the staff said that it has been able to expand to other areas, including the Chicagoland area.

Kristin Iverson, a sales specialist that has been with the meat lab since her time as an undergraduate student, said that customers are usually a good mix of local residents and residents of other cities, showing how much support the lab has been able to accumulate over the years.

“We have people who are college students that come by, but then we have people who drive down from Chicago to get products here,” Iverson said. “They’re alumni that have moved throughout the state. Usually when they do that, they either do a really big order or they talk to their family and friends and they’ll come down to pick up four or five orders.”

Joe Metz, assistant manager of the meat lab, said that he has enjoyed his time working alongside Peterson, learning as much as he can to take into the next phase of his career, especially a better understanding of food safety.

“The meat salesroom has four goals: First goal is teaching, second goal is research, third goal is extension, and from all three of those, our fourth goal is sales,” Peterson said. “We’re not here to make money. We’re here to train students, give them a nice resume builder, teach them a skill they may not have had in the past and then also reach out to the community as well to educate consumers about where their meat comes from.”