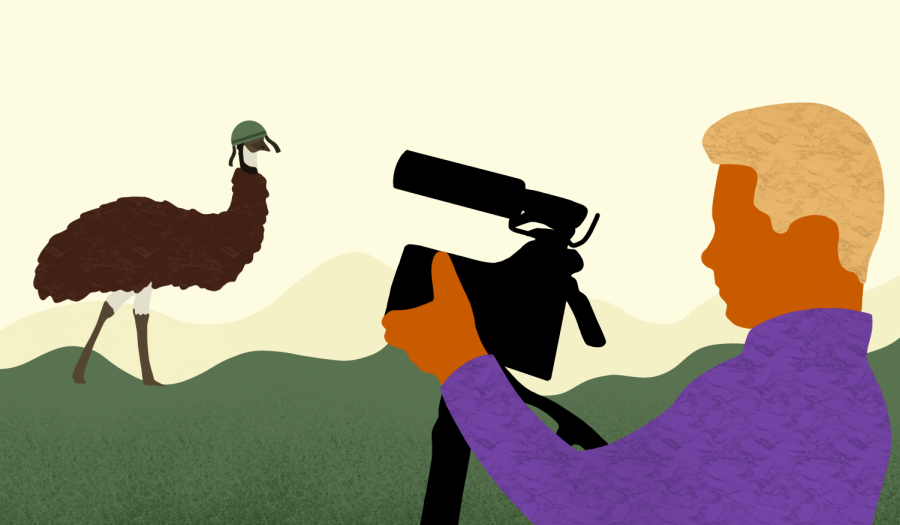 The year is 1932; all hope is lost in the land down under.
A barren, hollow wasteland lies in what was once a fiery warzone fought by the Australian populus against the undefeatable. An enemy without reason, without hesitation or remorse. Unequivocally determined to destroy all farmland and crops in its path.
This was the reality for those souls who fought in the Great Emu War of 1932 in Australia. Well … at least that is the image attempted to be created by filmmaker Kyle Harrington on the hilltops of Angeles National Forest in California.
“We had joked for years about the war, it just so happened that this was the perfect time to make this joke a reality,” Harrington said.
Independent filmmaking is a diverse and creative forefront in the content creation medium. The scale of such is small, however, the ideas are anything but.
The rise of small-scale directors to critical acclaim has consistently risen. Just recently, Chloé Zhao, a Chinese filmmaker known primarily for her work in independent American films, just won Best Director at the 2021 Oscars for her work on “Nomadland.”
Diving deep into the endless assortment of independent films available on YouTube, a charming short film has gotten what many say is deserved attention. “1932: The Great Emu War” from Flightless Films debuted in September of last year and has slowly grown in popularity with its absurd take on history.
“The Emu War” has in recent years become a meme, depicted in the image of the Vietnam War or World War II as a violent struggle to fight off the flightless bird. The director of the project, Kyle Harrington, and producer, Noah Dains, discussed the absurd idea.
“The idea to make some kind of dramatization of the Great Emu War in some form or another had been around for a while, mostly because of the ridiculousness of the actual history and the longstanding fascination with it on the internet,” Dains said. “I think what finally drove me to write the script and get the ball rolling on an actual short film was the fact that Kyle and I had graduated and would actually have time and the resources to make it.”
The filmmakers claimed the Sam Mendes war-flick “1917” gave the basis for the dramatic parody to gain ground. With the idea ready to go, the practicality of actually shooting it came into the mix, and Harrington said that like many indie crews it came down to getting the right friends involved.
“The team’s skill set really made the movie and everything you see in the film is a result of Noah and my skill sets,” Harrington said. “Noah and I both have backgrounds in visual effects. Noah is particularly great with costumes, sets and finding these phenomenal locations due to his background in production design. My background is centered more on writing, video game development and a kind of general film knowledge.”
Harrington said shooting the film with the crew in tow went swimmingly, with few accidents and apparently wrapping up with only $3 thousand spent on the budget. But then the pandemic swept the nation and like the entire industry, big and small, the movie was delayed due to serious post-production issues with getting audio redubbed socially distanced and visual effects implemented.
“This caused the biggest delay for the film because we wanted to have some really nice, clean audio to elevate it to the level we think it deserved,” Harrington said. “We eventually were able to record in the most (COVID-safe) way we had the ability to, but that was a tough few months of just waiting for the appropriate and safe way to do things.”
Dains further said how eventually several small reshoots were needed, and the difficult process of such took nearly the whole summer. Eventually in September the final product released.
Prospective student filmmakers are already faced with the intimidation of entering a cutthroat industry, now the pandemic makes entry even more difficult for small players. As graduates of Chapman University’s Dodge College of Film and Media Arts with years of early experience in the industry, Dains and Harrington said they were still devastated by the industry slow down, but both shared some uplifting and proactive advice to those still gunning to break onto the scene.
“Find your niche, and hone in on it,” Dains said. “There’s a lot of ways to have a career in film, but all of them are dependent on your reputation with other people in that industry, so keep it pristine, and find something good to be known for. If you’re in college, this is the perfect time to find out what you excel at and what talents you can develop. And it’s also the right time to make mistakes, so make them now before they have larger career repercussions.”