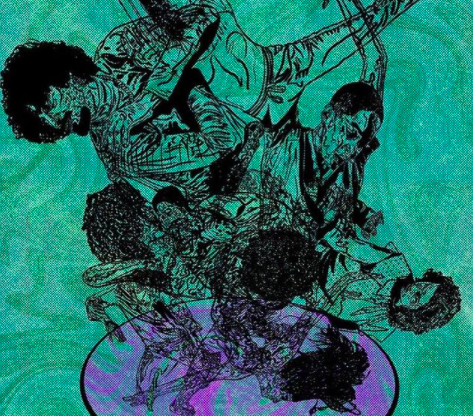 An illustration on the senior thesis project poster is shown above. The show was virtually streamed on Friday and Saturday despite setbacks from Covid-19.

As a young girl growing up in Chicago, Stephanie Shaw began to dance at church services with her family. Or, as her mom said, Shaw would just “get up and go.”

Shaw said she’s been a dancer ever since.

Once she got older, Shaw said her parents couldn’t afford to send her to dance classes. Instead, she started teaching herself to dance from watching YouTube videos and dance routines online.

When she got to high school, Shaw said she met a girl who took dance classes nearby and told her she wanted to dance just like her.

After that, Shaw said she took her under her wing. Whenever the two ran into each other at school, she would teach Shaw what she had learned at class the night before.

Now a senior in FAA, Shaw presented her senior thesis project last Friday night. The show was composed of 11 dance films shown on Friday and Saturday night — broken into Show A and Show B. Traditionally a live performance, the seniors in dance had to present their projects virtually this year because of the pandemic.

Instead of performing their projects on stage in front of an audience, the seniors were forced to learn how to create dance films — something most of them had never tried before.

Shaw’s film named “I”DENT”I”TY” is focused on finding your own identity. Throughout her piece, five dancers in gray suits wearing white masks dance through a field.

The viewer can’t tell the dancers apart. For Shaw, this was a deliberate choice.

“You can’t tell one from another,” Shaw said. “We can look the same, but it’s what we claim and identify as, that makes us different.”

At the end of the piece, the dancers shed their masks — finally allowing the viewer to see their physical identity.

As a dancer with no formal training until she came to the University, Shaw said she questioned her own identity as an artist. She said she felt insecure about her skills in dance compared to students who had more formal training in studios.

But eventually, she was able to see that her own identity was unique and embrace what she could do.

“I was really able to let those insecurities and doubts go and fully develop into the dancer and artist that I am today,” Shaw said. “Our identities are not stuck to us — they are always changing.”

Mya McClellan, another senior in FAA, also presented her thesis project Friday night alongside Shaw’s film titled “it’s not me, it’s you.”

“I want to end the cycles within my family,” McClellan said. “We still feel the effects of it in our body whether we know it or not.”

Although the piece was largely about the Black experience for her, McClellan said that it became something different for both of her dancers who aren’t Black. She said it became a way for them to confront trauma that they’ve experienced in their lives.

Dancing with a long strip of fabric throughout a majority of the piece, McClellan said she had to find a unique way to connect her dancers while still remaining socially distant.

“I tried to find new ways to connect my dancers,” McClellan said. “They could feel each other’s weight and still manipulate each other’s body even though they couldn’t make physical contact.”

Despite working on these projects for over a year, some seniors like Alexandra Green were forced to start over.

After a professor in FAA critiqued her piece and said that her dancers looked “sexually assaulted,” Green said she couldn’t look at what she had made the same way.

“Unknowing to her, I had experienced the trauma that the professor had brought up,” Green said. “I just could not look at what I had made the first semester the same.”

Green said she then decided to have a discussion with her dancers about trauma they had experienced. Through their talks, Green discovered that they all had experienced anxiety and panic attacks — something Green said is a huge problem in the dance industry.

Her dancers, including freshman in FAA Haley Krause, said they were each assigned a feeling you could experience during a panic attack. Krause choreographed a solo around her symptom of hyperventilation.

“She didn’t pick these for us,” Krause said. “She assigned us based on our real lives.”

Ibrahim Sabbi, senior in FAA, presented his piece on Saturday night and designed the promotional poster they used for the event. Sabbi said he wanted his artwork to connect the group of seniors which shows them all dancing intertwined.

Although the process was filled with challenges, like when Sabbi’s hard drive crashed and he lost all his edits, he said it felt great to come together and premiere all their projects together this past weekend.

“It feels good to know that even though a pandemic and so many restrictions placed on us, we still were all able to make really cool stuff and watch it together,” Sabbi said.