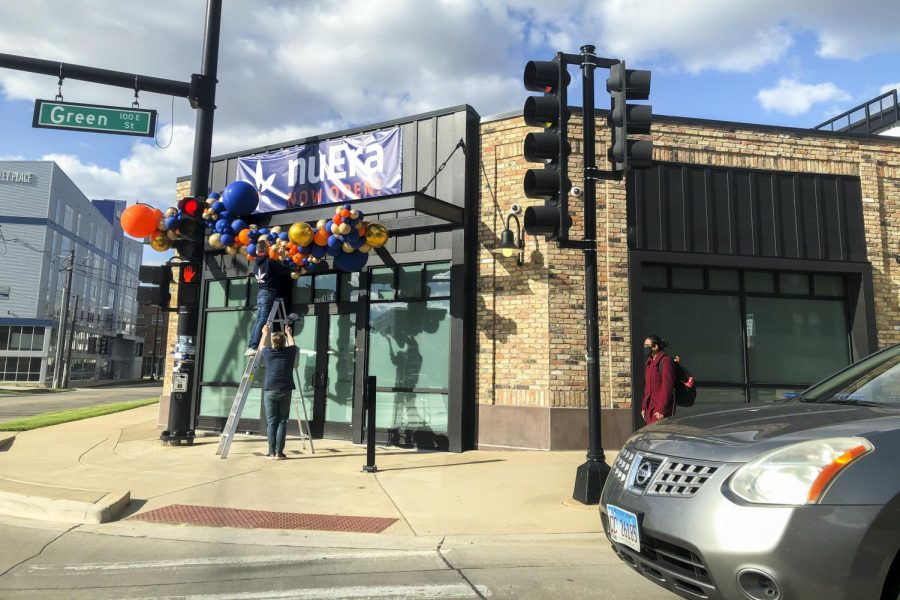 When Bridget Dwyer, junior in LAS, first heard that a cannabis dispensary was opening on Green Street, she said she was intrigued.

“I was super surprised that campus would allow that so close to the (Main) Quad and everything,” Dwyer said. “I was excited, though.”

The adult-use cannabis dispensary, nuEra, opened its Campustown location in early April. One month after its opening, general manager Alex Carretto said business is going well and has been on par with what they’ve expected so far.

Being close to the University campus, Carretto said their customer base is mostly college students but there are some local customers as well. They only sell to adults aged 21 and older and Carretto said IDs are checked at least three times throughout the process.

Dwyer, who considers herself a regular customer at the Campustown location, said she thinks the business could impact the campus community.

“It could impact student life because you have easier access to marijuana, but it’s the same thing with alcohol,” Dwyer said. “It could potentially negatively impact it, but it depends on the student body and how they choose to use it.”

Robin Kaler, spokesperson for the University, said in an email that marijuana is still illegal on campus and those found in possession will still face possible discipline.

In having this location, Caretto said he hopes it can help address current stigmas about recreational marijuana use.

“It’s nice to be able to educate people on a college campus,” Caretto said. “That’s something we’re trying to change, really trying to push it to an alternative to opioids and the benefits that marijuana really does have.”

Caretto also said he’s noticed that a lot of people, especially college students, are already educated about marijuana but there’s always some who aren’t aware.

Dwyer said there are still misconceptions about marijuana, with some associating its use with being a bad student. She said it’s important to remind people about the hectic times everyone is living in, which may be why some people are turning to marijuana use.

“I think it’s a really stressful time,” Dwyer said. “And in today’s world, people just need a break. Being empathic to that might help people understand.”

Caretto said the interest in marijuana has always been there, but with more people distancing and not going to bars, they could be “finding more release with it.”

Due to the COVID-19 pandemic, nuEra has guidelines in place to make sure purchasing products is safe.

Unlike the nuEra in Urbana, the Campustown location allows for in-person purchases either from the counter or via a kiosk inside. Both locations allow for online pre-ordering, according to their website.

There were concerns prior to opening about lines forming outside the building, which is why Caretto said they encourage online ordering. He did recall a line on April 20 — or known colloquially as 4/20 — considered as an occasion for smoking marijuana.

But on usual days, Dwyer said that “lines don’t form, literally not at all.”

As summer approaches and some students leave campus, Carretto said there isn’t any concern about business since there’s a large population size in Champaign, and the Urbana location has “strong ties to the community.”

Overall, Dwyer said she’s hopeful that this location could be beneficial to the campus community.

“People going in (nuEra) and experiencing it and seeing how professional and regulated it is, this can be great if people use it properly,” Dwyer said.