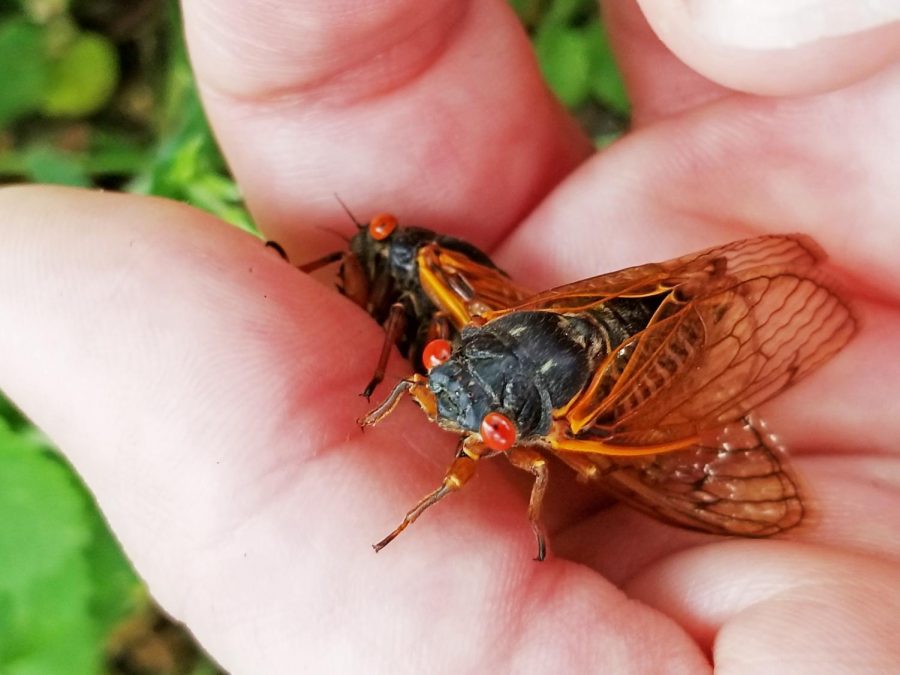 By Matt Troher, Investigative News and Longform Editor
May 10, 2021

From late spring to early summer, billions of tiny insects will emerge from the ground. They will lay their eggs, mate and make lots of noise. For those who happen to live near the bugs, it will be deafening.
They will shed their exoskeletons and leave them to line trees and sidewalks, terrifying little children and the occasional adult walking by. Their shared chorus will be heard from miles away, signifying one thing.
The cicadas are coming.
Every summer, a group of cicadas emerge from the ground where they spend most of their lives. These groups are called broods, which are classified by time and region. What makes this summer special, however, is the emergence of a specific species of cicadas called Magicicada, commonly known as periodical cicadas.
Magicicada only emerge from the ground once every 13 or 17 years, depending on the brood, making their emergence a special occasion. This summer, Brood X (read as brood ten), know as the Great Eastern Brood, will make their emergence. While experts only expect the brood to be seen in Illinois’ easternmost counties — Clarke, Crawford, Edgar and Vermillion — cicadas don’t care much for administrative districts and may make an appearance in the neighboring Champaign county.
Katie Dana, doctoral candidate in LAS, studies cicadas. Her summers can be spent traveling the state and surveying cicada populations, contributing to research on a species she believes are underappreciated.
“Cicadas are kind of an understudied group, and I keep adding new state records to Illinois because nobody’s really been out looking for them,” Dana said. “Because Illinois is such a fragmented landscape, especially the prairies being such a fragmented resource, I spent a lot of time traveling throughout the state, and I spent a lot of time at roadside prairies, typically railway prairies.”
According to Dana, there’s no proven reason why periodical cicadas only emerge every thirteen or seventeen years. However, the leading hypothesis is that their sporadic nature is hard for predators to predict and gives them an evolutionary advantage.
“The more popular is the idea that it’s hard for predators to predict these emergences,” Dana said. “If you come out in large numbers, but sporadically, no predator is going to predict that and eat all the individuals before they are able to lay eggs.”
Due to the rarity of an event such as the emergence of Brood X, media outlets have understandably been abuzz with cicada coverage. But Cicadas are more than just an episodic event, their biology can have some applications to our world and out technology.
Marianne Alleyne, professor in LAS, studies bioinspired design, looking at insects for inspiration on how to make new technologies. Cicadas interest Alleyne due to a special property of their wings.
“Cicada wings have little nano-pillars that are so small that water collects up in droplets on top of those fillers, and that kind of sits there, and it doesn’t spread out,” Alleyne said. “That’s called hydrophobic, superhydrophobic to be technical, and then when it can actually roll off, the wing never gets wet. You could think about how we could use surfaces like that, that don’t get wet, that can self clean.”
While hydrophobic technology does exist, a vast majority of those technologies utilize a chemical mixture to achieve hydrophobicity. Alleyne believes basing technology off the existing physical structure of cicada wings will help with sustainability — both in the ecological sense and technology longevity.
“It’s always easier to just cover it with certain chemicals, like a surface with chemicals, and get hydrophobicity that way,” Alleyne said. “But I think we all have come to realize that that might not be sustainable. If you have structural features, maybe you can actually keep that hydrophobicity for longer.”
Alleyne’s interest in cicadas will bring her out to the East Coast in just a few weeks. Since it is rare Champaign county will see the full brunt of Brood X, she plans on making a road trip out to Washington D.C. to view the Brood in its full glory.
“I highly recommend a road trip there,” Alleyne said.