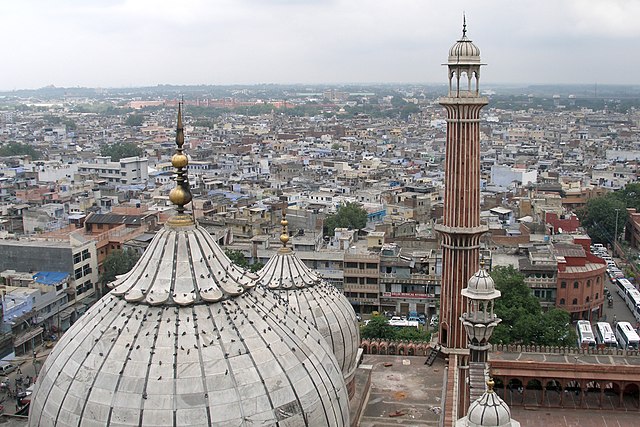 A photo is taken from the Jama Masjid mosque in Old Delhi, India on Sept. 27, 2007. Multiple students at the University are traveling back to India where there is a spike in Covid-19 cases.

For Siddh Saraogi, undergraduate in Engineering, the fear is overwhelming.

Saraogi is in the United States, but his family lives in Delhi, India. He, like many, is currently on edge as India undergoes a catastrophic surge in COVID-19 cases, with his family dealing with supply shortages and constant fear.

Saraogi mentioned the spontaneous social media movements of people reaching out via Instagram to connect infected individuals with vital supplies, an unfortunate reality given the ongoing shortage caused by a near-total collapse of the health care system.

“There was recently a COVID-19 scare in my family, and I was extremely concerned about my grandparents who have other health issues,” Saraogi said.

Saraogi is not alone in his fears for family at home. The University is home to many students with direct family and homes in India, and the pandemic already strangled ties between them, but the mega-surge during recent weeks has pushed stress to new limits.

“There are people I know who aren’t going back to India and are forced to stay here, adding to the already depressing situation,” Saraogi said.

As of Sunday, the total reported coronavirus cases in India is currently 21.49 million, with 234,000 in fatalities.

Back in 2020, during the advent of the pandemic, the country didn’t have a massive surge in cases. This was surprising given its high population density in combination with high poverty rates, which made it seem like a perfect environment for an asymptomatic virus to spread. This recent surge can be attributed to several factors from political and religious events, but many can agree the government failed to use the time of low infections to stock up and brace for later surges of the virus.

As scary as it is to have family across the globe struggling to survive, it’s in many online students’ backyards.

Harsh Deep, junior in Engineering, has been living in India since the pandemic began in 2019. He said maintaining normalcy has been a struggle amid the initial pandemic wave, but the recent surge has made things dire.

“I was planning to go back this summer for research and generally making up for lost time since I’m basically done with my junior year, but the ban just suddenly happened and the admin hasn’t given us much idea,” Deep said. “As for my family, we’re just staying holed up at home going out for basically nothing. Delivery apps for groceries and stuff and not even ordering out in case we get sick — I doubt we’ll have hospitals available.”

The helplessness felt by domestic students cannot be underestimated.

In Illinois, daily cases are the lowest they have been with 1,424 cases on Monday and 12 deaths, although the amount of people getting vaccinated has decreased. Mistrust and hesitation still lingers for many, and some are forgetting to get the second dose of either the Pfizer or the Moderna vaccine, among other things.

Many students said they feel as if Americans refusing to get the vaccine is disheartening when it’s a struggle for overwhelmed hospitals in India to get oxygen.

American aid to the nation has been authorized and several operations are underway to aid the country in delivering much needed supplies. White House national security adviser Jake Sullivan and Indian national security adviser Ajit Doval confirmed on April 25 the moves to ship vital supplies such as raw materials for vaccine production, oxygen containers, ventilators and many more materials. However, the true extent to which the surge will persist is still up in the air.