Transgender students say UI failed to address concerns about deadnaming all year, not just during graduation 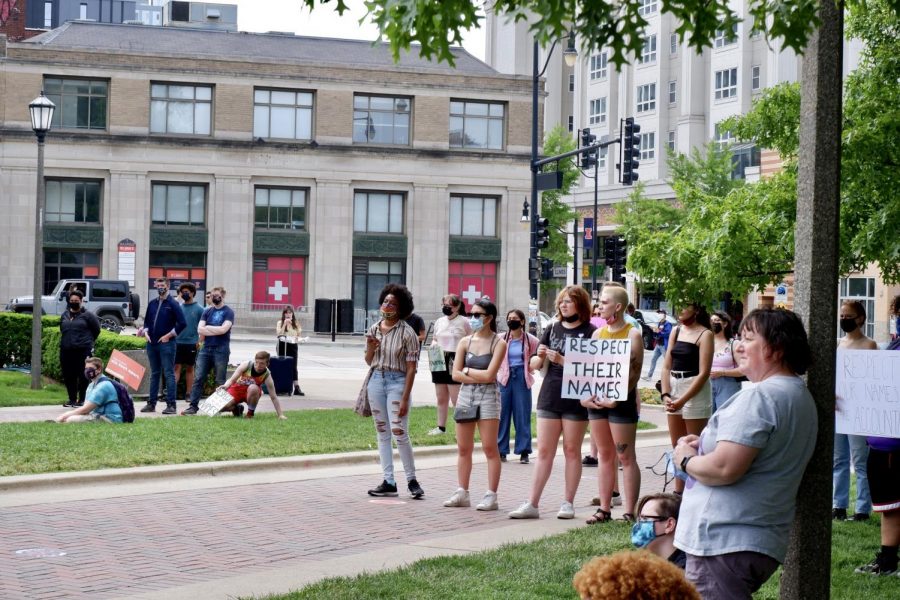 By Farrah Anderson, Assistant Investigative News and Longform Editor
May 25, 2021

Donning a blue and orange cap and gown, a University graduate had been warned by his mother not to get upset if his deadname was called at the ceremony.

‘Deadnaming’ is the use of a transgender or non-binary person’s birth name instead of their preferred name.

Cyrus Arnieri, transgender graduate in ACES, assured his mom that he had been corresponding with the University for months. He had even recently legally changed his name.

Despite taking these actions in March, Arnieri heard his deadname announced over the speaker.

“My deadname rang in my ears,” Arnieri said. “My moment was ruined.”

Arnieri was allowed to walk again the next day using his preferred name. But he said the University needs to value the preferred names of future graduates.

In order to advocate for future transgender and non-binary students, Arnieri organized a protest held at the Alma Mater statue Saturday afternoon to demand better treatment from the University — something he says is long overdue.

“I refuse to see another trans student have one of their proudest accomplishments turned to dust,” Arnieri said. “I refuse for this University to continue to ignore and disrespect its transgender and queer student body.”

In March of 2020, the Illinois Student Government introduced a resolution for the University to allow students to use their preferred names on their diplomas.

Once the resolution was passed, Rao said she thought that was the end of it.

“Our team thought that we spoke up and the issue was resolved,” Rao said. “But obviously, (the University) can’t listen to its entire student body.”

Rao said LGBT issues at the University have always felt like an afterthought. Now, she said the University needs to value the names and presence of LGBT students on campus.

“We need you to respect our names and our right to exist,” Rao said. “That is not too much to ask.”

University spokesperson Robin Kaler said in an email that some students did not have the opportunity to provide their preferred names so they could be used at the ceremonies. Kaler said there will be a greater effort to use preferred names for future graduates.

“We value every student, and we will continue to improve our systems so we demonstrate to each graduate how much we value them,” Kaler wrote.

The protest was co-organized by Linds Flood, non-binary junior in LAS at the University.

“Why do I have to sit here and deal with this when I’m just trying to learn?” Flood said. “It’s just such a small thing to do.”

Arnieri authored a petition to Chancellor Robert Jones and the University administration to end deadnaming at graduation — which has now amassed over 1,000 signatures.

Planning to send out emails to the University’s administration to demand action, Arnieri said he didn’t initially say anything after he was deadnamed. Instead, he said he just felt numb.

For Arnieri, he said speaking up as a transgender person can be difficult.

“For me and many others, the trans experience is feeling like an inconvenience,” Arnieri said.

As a rising junior, Flood said they hope the University will take steps to ensure transgender and non-binary students like them won’t have the same problem at their graduation ceremonies.

Flood said the University’s actions prove it believes transgender and non-binary students are too difficult to accommodate.

“They prove that in practice, they think we are the same inconvenience that we try every day to convince ourselves we’re not,” Flood said.