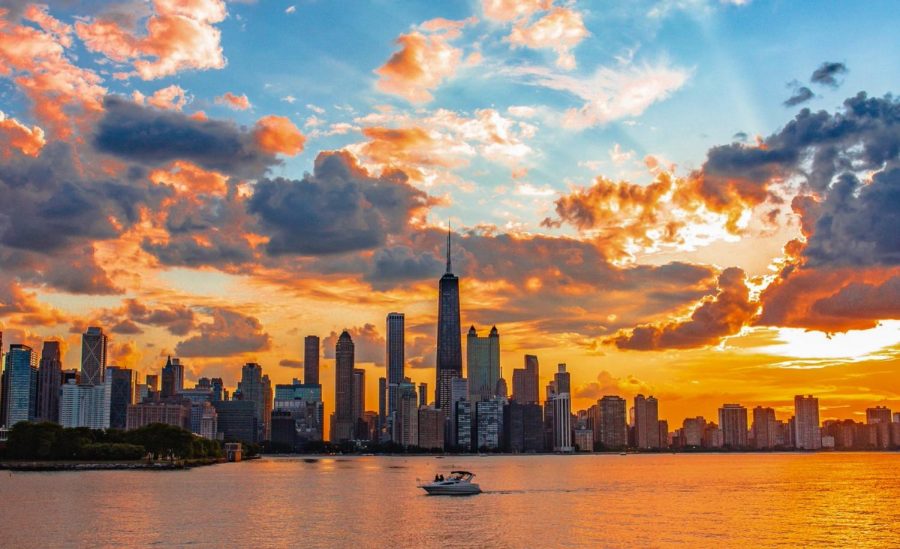 The Chicago skyline is photographed by Jack Gillespie during a colorful sunset. Students Sierra Reed and Gillespie have garnered thousands of followers through TikTok by making the platform into a business opportunity.

Sierra Reed, senior in Media, joined TikTok during her sophomore year after seeing her roommate having fun with the app. Over a year later, Reed has amassed over 420,000 followers and 14.3 million likes and has turned a social media hobby into a business venture, all without leaving her apartment.

Reed was no stranger to social media at the time of joining TikTok, she had been on Vine during its heyday, and even had a brief stint on musical.ly — the precursor to TikTok. The app’s focus on short-form videos reminded her of Vine, and she joined TikTok under the username @__queensie__.

Her roommate quickly gained a short following on the app and sparked Reed’s idea of making TikToks with the purpose of attempting to garner an audience instead of just for fun. After a few attempts with little viral success, an innocuous video of Reed doing a trend at the time, accompanied by a humorous reaction by her mom, was viewed by over a million users.

“It was insane,” Reed said. “I remember you put your phone down, and then the next time you look at it, your phone’s flooded with notifications, second after second. It even got to a point where I was getting so many notifications, I even had to turn my notifications off because I couldn’t do anything else on my phone.”

After her first viral TikTok, friends and acquaintances she hadn’t talked to in a while started reaching out to say ‘Hey, I saw you on my for you page!’ While it was a trend that led Reed to her first viral experience, most of her account is oriented around the running series she creates.

Two of her most popular series focus on being Black at a predominantly white institution and making humorous observations about popular stories on Wattpad — a fanfiction and independent literature site. Recently, Reed has begun to produce merchandise related to one of her series — a modern retelling of Romeo and Juliet.

With views comes opportunity. After Reed amassed a sizable viewership on the app, she began to receive brand deals. Clothing brands, hair companies and even medicine brands reached out, giving her free samples if she made a TikTok featuring their products.

“I was one of those people that would be on social media for fun, but now it’s a business thing,” Reed said. “Checking my email is a must. I have to constantly check my email, see who’s reaching out to me, see what their offering is. It’s become a whole business side of it that wasn’t there before.

Reed isn’t the only student who’s amassed a following on social media. Jack Gillespie, former student in LAS who’s now a sophomore transfer at UIC, has over 293,000 followers on TikTok. Going by the username @visualsbyjack, Gillespie joined TikTok while looking to expand after utilizing Instagram to promote his photography.

Gillespie always had an interest in photography, taking photos with his iPod from a young age. In 2016, he received his first digital single-lens reflex camera as a gift from his parents and began taking his craft more seriously. A year later, he began posting photos to Instagram — mostly to share with his friends and family.

But during the beginning of the COVID-19 pandemic, Gillespie created his TikTok account and began sharing his photography through videos. The vast majority of Gillespie’s videos circle around showcasing different parts of the city and quickly noticed his videos were receiving a lot of attention, regularly garnering views in the tens of thousands. To build his brand, he made it a point to post almost every day.

In each of his videos, Gillespie highlights noteworthy restaurants, rooftop bars and locations throughout Chicago and the suburbs.

“All my videos are really geared around motivating people to get out and explore their area, wherever that is, whether that be Downtown (Chicago), Champaign or the suburbs,” Gillespie said.

Gillespie’s love for Chicago extends beyond his photography or social media accounts, so much that he’s moving into the city this summer and taking up a job as a leasing agent. Although he didn’t intend to turn his TikTok into a business and doesn’t seek out sponsorships, Chicago companies have taken notice and inquired about collaborations.

“I’ve had companies reach out to me and discuss terms for potential collaborations, and I’m sure that will definitely grow when I move into Chicago in the next few weeks,” Gillespie said.