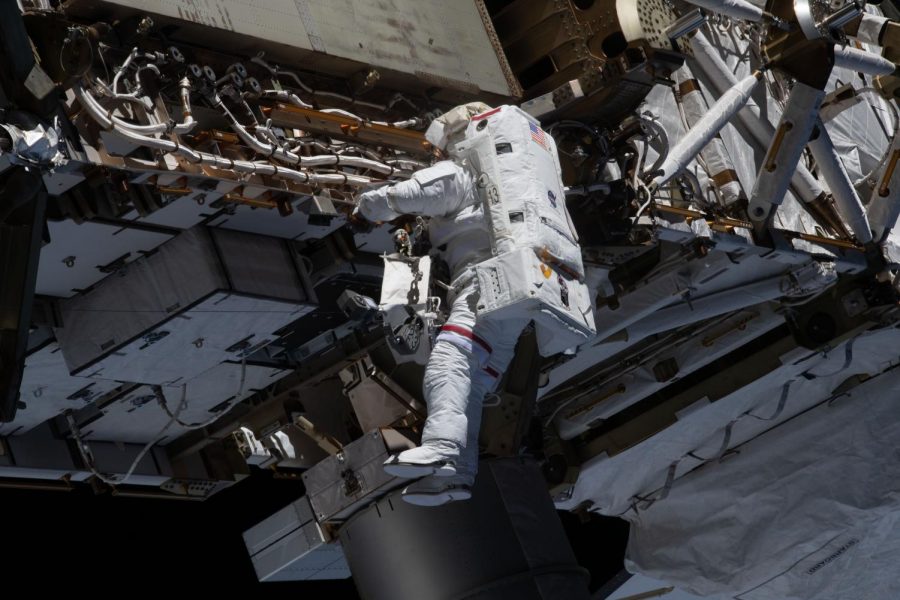 NASA spacewalker, Expedition 64 Flight Engineer, and Illinois alumni Michael Hopkins works to ready the International Space station’s port-side truss structure for future solar array upgrades on Jan. 27. Hopkins reflects on his most recent experience leaving for space in the midst of a pandemic.

When Mike Hopkins, commander of the SpaceX Crew Dragon Resilience, went to turn the power back on, he paused to look at the stars glistening so brightly they filled the night sky with different colors.

His neck began to pulse as he hovered thousands of miles above his home in what he said is a once-in-a-lifetime view.

When speaking with Mike Hopkins, University of Illinois alum, his voice was filled with passion as he attempted to describe the unworldly experiences he had on Resilience.

“It took your breath away,” Hopkins said. “The Milky Way was just right there. I felt like I could reach out and touch it. It was definitely one of those moments that causes you to reflect on everything — on life and just how amazing it is and what an incredible planet we live on and what an incredible universe this is.”

Hopkins left Earth in the thick of a global pandemic — an experience only few share.

When Resilience took off in November, Hopkins said it represented the perseverance humankind has had throughout the pandemic.

“(The pandemic) was a big motivation for the naming of our vehicle ‘Resilience’ because it really was a recognition of not only SpaceX, NASA and the teams that got us to the launch and were able to keep things rolling, building our vehicle and continue our training, but really, it was a recognition of everybody in the world that had been going through so much and accomplished so much during a very difficult time,” he said.

Hopkins said once the team was launched into space, they didn’t need to wear masks because they had all been tested and would be living together for months. He said it was nice to not have to worry about contracting the virus, but the pain of the pandemic was still very real.

Hopkins said the pandemic added extra stress and duty to the mission and their families.

“It added a little bit of extra stress on the families,” Hopkins said. “Now, all of a sudden the risks of getting COVID-19 didn’t just impact (me and my crew’s) work or our families, but it also potentially affected the space program.”

Hopkins has two college-age sons that he said had to take extra precautions to protect their dad from getting sick. He said his wife, a school nurse, also had extra burdens and restrictions to keep him healthy.

Hopkins came back to Earth in May, and said he’s been very busy since.

However, the moment when Hopkins splashed back onto Earth he felt relief.

“It’s an incredible feeling when you finally splash down,” he said. “And part of that feeling is a big sigh because for the entire time that you’ve been on orbit, you’re on duty. Even if it’s a day off, if something goes wrong you have to respond. And so when you finally splash down, you realize that you’ve handed the torch off to somebody else and you’re no longer responsible for the safe operation of the international space station, at least for that moment.”

Immediately after landing, Hopkins had to go through numerous medical experiments, rehabs and debriefs, and it never slowed down for days after. This is so the researchers and scientists can record everything while it’s still fresh and their bodies haven’t fully adjusted back to life on Earth.

“It’s just one of those things that I think a lot of people don’t realize, that even after a six month mission and you land or splash down, the mission’s really not over,” he said. “You’ve got quite a bit of time that you have to dedicate to that mission.”

Hopkins said he’s learned a lot from his time with the space program, and he’s always grateful to get the opportunity to share with students.

“Thirty years ago I was right where (students) were,” Hopkins said. “For any students that have dreams to go to space, it’s definitely possible. I think the opportunities for people that are in college now and the opportunities to be some of those people to go to Mars for the first time are very real and very exciting.”

Even if you don’t want to go to space, Hopkins said there is a need for everyone and every career.

Hopkins also passed along advice and perspective for those that don’t have interest in space.

“Whatever it is you’re passionate about, pursue that with everything you’ve got because one of the things I’ve learned from having left the planet is we have it good down here,” Hopkins said. “Life is good on Earth and it’s a very special place, so enjoy every moment that you have down here and pursue those dreams and pursue those passions.”