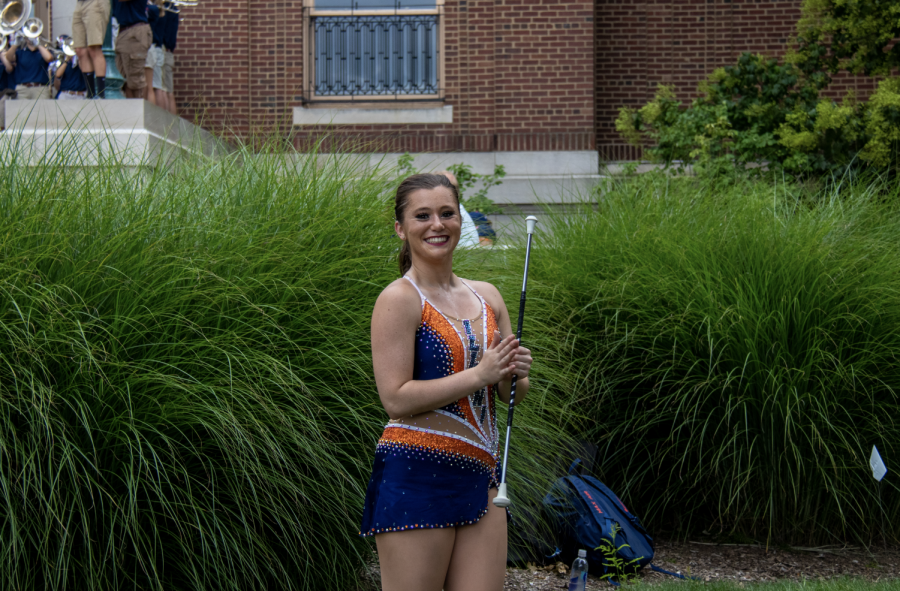 Julia Arciola, junior in LAS, holds her baton on Quad Day while performing with the Marching Illini on Aug. 22. Arciola reflects on her past successes and experience as a baton twirler at the University.

Julia Arciola, junior in LAS, marched into Memorial Stadium on Aug. 28, along with the 400 members of the Marching Illini. She’s not carrying an instrument, however — nor a flag or a conductor’s baton. She has a different type of baton, 30 inches long and constructed of hollow metal.

Her role is one no one else holds: the Marching Illini’s featured baton twirler.

She took a second to recognize the crowd — a sea of orange with scattered splotches of red, a few lone Nebraska supporters — then paused to compose herself. Arciola had a job to do: entertain. She performed with the Marching Illini during the band’s pregame and halftime shows, and during the game, she’d entertain the stadium from within it or on the sidelines.

Not only is Arciola the featured twirler for The Marching Illini, she is also one of the top baton twirlers in the country.

Growing up in south Florida, Arciola spent her childhood trying out different sports. She was enrolled in youth soccer, softball and tennis, but found the Florida heat to be too much and opted for an indoor sport. After her parents witnessed a baton twirler leading a local parade and subsequently learned that the sport takes place indoors, they signed her up for lessons.

“I fell in love with it from the beginning,” Arciola said.

She competed in her first baton twirling competition when she was six and won the Florida state championship for her age group. Her love for the sport only grew from there, and she set her sights on becoming a collegiate twirler.

Most recently, Arciola competed in the 2021 Amateur Athletic Union’s Junior Olympics, where she won the collegiate division’s national championship and competed in the semifinals of the United States Twirling Association’s three baton discipline.

“You have to have motivation, as with any sport, to be able to practice and be really disciplined in the sense that you practice enough of the skills, so that way when you compete you don’t have to worry,” Arciola said.

There are two main organizations for competitive twirling, the USTA and the National Baton Twirling Association. Arciola competes primarily within the USTA, which organizes competitions on the local, state, regional and national levels, with a variety of disciplines. In addition to performing a routine with one baton, other disciplines include performing with two batons, introducing elements of dance and team routines. One discipline called “strut” requires the performer to remain in contact with the baton throughout the routine — no tosses allowed.

Arciola’s specialization and personal favorite is the three baton discipline, a combination of gymnastics, juggling and twirling.

“It’s the one that sort of clicked in my head, it’s the one I’m the best at and it’s the one I most enjoy,” Arciola said. “With three batons, I have to focus on every baton. I really have to sort of blind myself to everything that’s going on around me and focus on what I’m doing.”

If working with multiple batons during a routine wasn’t difficult enough, performing at Memorial Stadium brings a whole new world of potential distractions. Arciola recalls performing during the game against Nebraska and spotting herself on the stadium’s 96-foot-tall video screen.

“For most people, you want to look at the screen and you want to see yourself, and that was one thing where I had to be like ‘Julia, you can’t look at yourself because you have a responsibility to make sure you look good and you don’t drop on the screen when everybody’s watching,’” Arciola said.

“Collegiate twirling is a dream that I’ve had ever since I started, and especially in the capacity that I’m in, which is the only featured twirler for a big university, so that will be a great end to my performance twirling,” Arciola said .“Once I feel like I’ve hit that same note with my competitive twirling is probably when I’ll put it away, but you never know, I might join a cruise line or something.”