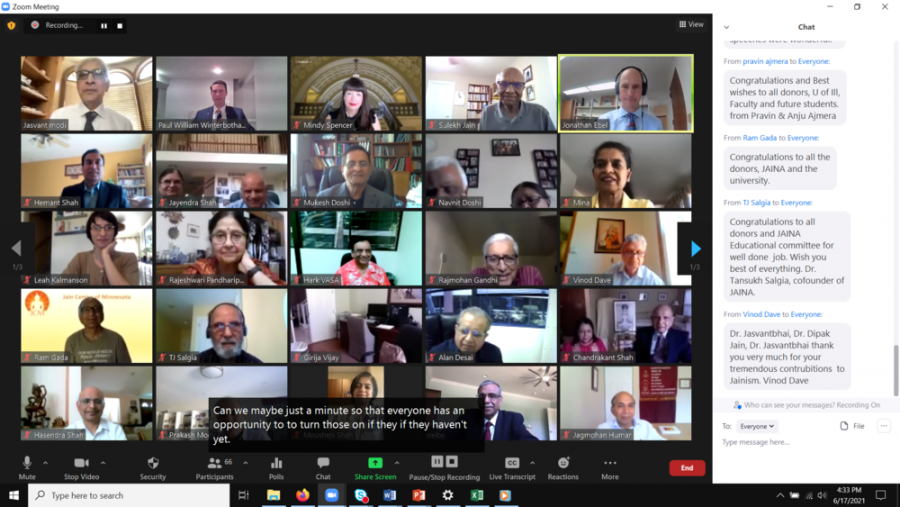 A Zoom meeting is held while Jainism received a donation for the study of Jainism on July 5. The religion Jainism will be studied under the Religious Department.

In May, the Department of Religion received $1 million to establish a program to further research of Jainism. The gift comes from a group of Jain donors throughout Illinois and the United States who want to spread the teachings and history of the religion.

Jainism is a South Asian, nontheistic religion that arose around the same time as Buddhism in the sixth century B.C. The religion shares some similarities and practices with Hinduism and Buddhism. There are about 5.5 million practicing Jains, assistant professor Adam Newman said.

Those who practice Jainism follow three tenants: the importance of nonviolence, interfaith dialogue and acceptance, and nonpossessiveness, Newman said. These traits can be demonstrated through Jains’ commitment to be nonviolent toward animals by practicing a vegetarian or vegan lifestyle.

The donation, which is the largest in the history of the Department of Religion, was designated as an endowment for a professorship in Jain studies, department head Jonathan Ebel said.

However, the time it will take to hire a professor devoted to Jain studies is dependent on the approval process and may take a few years to hire someone to fill this position.

“We aren’t really in control of when that can happen because the approval process for hiring new faculty is one that involves the needs of many departments,” Ebel said. “In some way, we are at the mercy of LAS and the mercy of the University. We will start requesting that position this year and hopefully get approved for it sometime in the next couple of years.”

Until the position request can occur, the department plans to incorporate Jainism into its other courses. Newman plans to spend more time on Jainism in his REL 286: Introduction to Hinduism course and graduate program seminar.

“I’m planning with my Intro to Hinduism (course) to expand my unit on Jainism because a lot of students are familiar with Buddhism or Hinduism but not as much Jainism,” Newman said. “Put a stress on Jainism. That is what I foresee in the next year and a half.”

In addition to incorporating Jain studies into existing classes, the money allocated might possibly be used to host Jain events and speaker series. There is also a possibility for the department to hold a symposium or hire lecturers or part-time faculty to aide in Jain teaching, Ebel said.

While it will take some time before courses in Jainism are introduced at the University, religion students are excited for the addition.

Students across all majors are able to take religion classes. Ebel said studying religion has applications that are useful in the real world.

“It is also the case that in subtle ways that these cultures are our own,” Ebel said. “We live and work in a campus in a state that is incredibly religiously diverse. That is not an anomaly of your college experience. It is the way that your world is going to be. In learning about different religious traditions, you’re also developing knowledge and skills that are going to serve you well in the workplace.”

Religion can also be connected to other majors, Katz said.

As the department plans what to do with the money until it gets approval in the professor-hiring process, there is a feeling of excitement, Newman said.

“There is so much potential, and it is such a unique opportunity that we have been given,” Newman said. “Jainism is not widely taught or even widely studied so that we’ve been given this opportunity is just fantastic and exciting.”