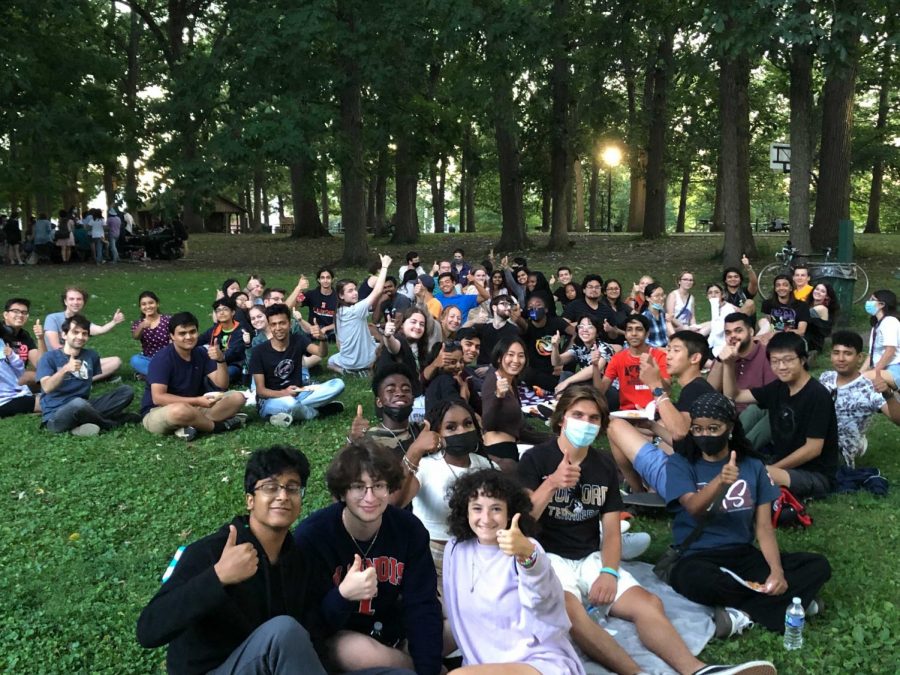 Photo Courtesy of the Astro-biology club

Members of the Astro-biology club sit in a park during a social event. The Alien club, an extraterrestrial themed RSO, questions and discusses a series of topics about conspiracy theories.

The Bermuda Triangle. The Roswell Incident. Crop circles. M. Night Shyamalan. Many wonder whether these fateful incidents and mysterious realms of uncertainty were the result of our primitive species being graced by an otherworldly presence, from beyond the stars.

Student believers collected in the middle of the woods to discuss these theories at Astrobiology club.

The Astrobiology club, or “Alien club” as some call it, is an RSO with dozens of members fascinated by what lies beyond the stars.

“I really wanted to bring more awareness to Astrobiology because aliens are a topic I think everyone is really interested in, so I wanted to bring people together,” said Jessica Xhumari, president of the club and senior in LAS. “Talk about the science of it and get people involved.”

Rather than sit in a tin-hit circle and discuss conspiracies like Malaysia Flight 370 and horse-dewormers, the group aims for a more concentrated discussion of outer space and the possibility of a third kind. Xhumari highlighted how the group aims to have night trips, fundraisers, movie and social events, as well as professional events doing research and trying for internships in the NASA field.

The group has an active newsletter highlighting upcoming events for the club, but acting also as a discovery newsletter on the topic of extraterrestrials. The latest edition focused on articles about a new class of larger exoplanets with oceans and hydrogen atmospheres that can broaden the search for habitable planets, as well as details about Japan’s Martian Moon eXploration craft planned to launch in 2024.

Eli Sofovich, senior in LAS, is a new number of the club and shared his excitement to meet like-minded believers.

“I’m excited for everything man,” Sofovich said. “There is a lot of potential with what this club is about. It’s very interesting to people and has a lot of pop-culture history, as well as scientific background to it.”

Sofovich was beaming with excitement for the many future events planned by the new group. It hopes to lead students with such extraterrestrial thinking towards many science-related resources on campus.

Briana Bragg, junior in LAS, acts as vice president of the club. She said she was excited to make new friends and to have fun discussions. She said she wants to stress that the club welcomes all — science-major or not.

“I believe it is very valuable,” Bragg said. “Getting everyone’s insights and point of views on the subject.”

Xhumari discussed the point of how everyone and anyone interested can and should get involved.

“Yes, of course, everyone should come,” Xhumari said. “Doesn’t matter what student you are, undergraduate or graduate, what major you are.”

Editor’s Note: A previous version of this story included a headline that incorrectly referred to Astrobiology Club as Alien Club. While some refer to the RSO by Alien Club, its official title is Astrobiology Club. The Daily Illini regrets this error.