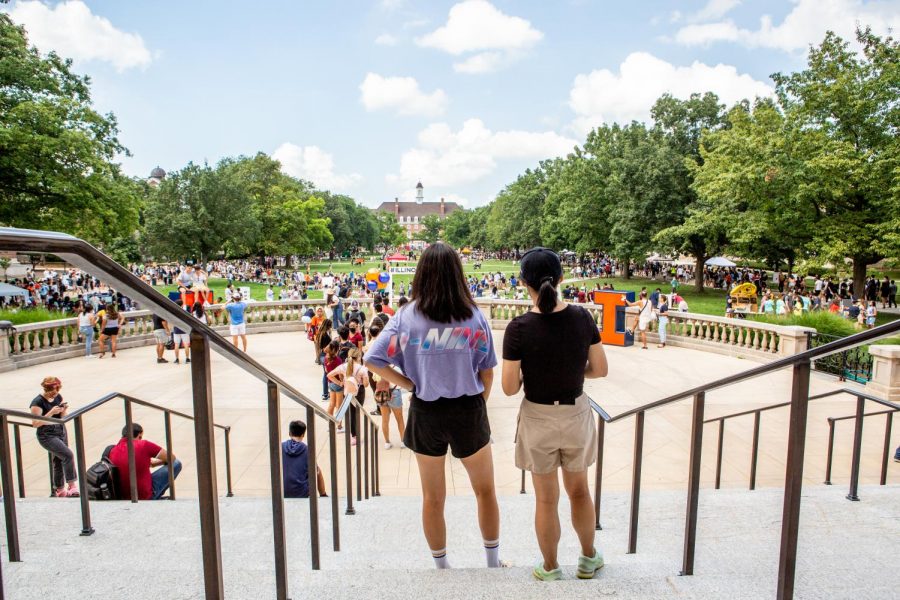 Two students look to the Main Quad at all of the RSO booths during Quad Day on Aug. 22. University students have made changes to their school careers during the pandemic by switching majors and life directions.

In the early spring of 2020, David Chung was in the midst of a rough sophomore year. High school was easy for him. He was a stellar student, he intuitively grasped academic concepts and he had to do little more than turn in his homework to keep up his grades.

However, once Chung got to college, he had a hard time picking up concrete study habits. He started floundering in his classes. His goal after college was to go to medical school.

Chung was already considering taking a gap year to straighten his priorities. When the COVID-19 pandemic sent students back to their homes, he saw an opportunity. He knew online classes wouldn’t help in his situation, so he made the decision to take last school year off as a mid-collegiate gap year.

In the summer of 2020, he moved into an apartment in Chicago’s Tri-Taylor neighborhood, right next to Chicago’s medical district. His two roommates were both doctors, and although Chung rarely saw either of them, on account of them being doctors, they became impromptu mentors to the young med school hopeful.

“They told me ‘You are not a child anymore. You’ve got to grow up. It’s nonstop work, preparing for med school, it’s legit going to be hard,’” he said.

Chung spent his days waiting tables and working odd jobs. Riding the CTA home at night, he’d watch the faces of the passengers around him. To him, they looked upset and worn out. He was too. Working in the service industry was unfulfilling and draining. However, his year of hard work waiting tables served a purpose — a chance to garner life experiences and reapproach his studies with a new perspective.

“When you’re working full time, you really get to understand if you hate what you’re doing,” Chung said.

“My dream was always to be a doctor, and I can’t settle for less. I don’t want to settle for less. The gap year — it’s a beautiful thing. It might put you behind a little bit, but it will slingshot you forward. The mental plusses I gained from working, that’s wisdom right there.”

When the pandemic shut down in-person classes, students were left with an abundance of free time. They didn’t have to walk to class, they didn’t need to plan for a night out with friends or budget time for hanging out after an RSO meeting. Some students, like Chung, knew they wouldn’t benefit from online classes and took the whole year off.

Like Chung, Diya Jagroop, junior in AHS, always intended on becoming a doctor. Prior to the pandemic, she was a freshman studying biology. But ever since her first day in a biology classroom, she knew the major wasn’t for her.

All her friends studying biology hated it too, so she thought she’d just push through and get a major she didn’t even like as a means to an end. Besides, chemistry, the other most popular major for pre-med students, was even more unappealing to her at the time.

The sudden changes brought upon by the tumultuous year of 2020 got Jagroop thinking. She still wanted to be a doctor, but there have to be other ways to get there.

“Throughout the pandemic, we really saw what it means to live,” Jagroop said. “I’ve lost quite a few people during this pandemic and it really had me reevaluating my life in that regard. I was like ‘You know what, you only have this one life and you really need to go and make the most of it and do something you’re actually passionate about.’ So I switched my major to community health in the fall of 2020, and honestly, that’s been one of the best decisions I’ve ever made.”

She added three minors on top of her public health major: business, chemistry and sociology. Adopting a new outlook on life, Jagroop took a 23 credit hour course load during the fall 2020 semester. If that wasn’t enough, she took 24 credit hours the following semester. She received Dean’s List honors for both semesters.

“It was crazy because, at home, I didn’t really have much else to do so I focused on my academics,” Jagroop said. “I overloaded my schedule a lot, but I was still able to accomplish these amazing things. When I was on campus, because I had everything else going on, I didn’t really have the chance to focus on my studies.”

Alex Kochankovski, junior in Engineering, didn’t change majors or career plans throughout the pandemic. Instead, a brush with the virus itself left him with a new outlook on life.

On his first day back on campus sophomore year, he moved into his dorm, got lunch with his friends and capped off his afternoon by getting the required back-to-school COVID-19 test. His year changed directions when he became one of the first students on campus to test positive for COVID-19.

He moved into a quarantine dorm and spent the next two weeks in total isolation. While the University was accommodating to his needs, they were still working out some hiccups. At one point, the lock on Kochankovski’s bathroom door broke, and he had to jerry-rig the door open with leftover knives from meal packets in order to access the restroom.

Testing positive for the virus, coupled with spending the first two weeks of his sophomore year in isolation, threw Kochankovski for a loop. The time spent alone allowed him to draw inward and evaluate his life beyond the classroom. Fourteen days later, he emerged COVID-free and with a new lease on life

“After being isolated, I took interacting with people much more seriously,” Kochankovski said. “Obviously the stereotype of an engineering major is that we don’t talk to anyone, but coming out of (isolation) having been forced to not interact with anyone, I was like I need to value the people I have contact with and put the effort out. It drove me into putting a lot more energy into my relationships.”