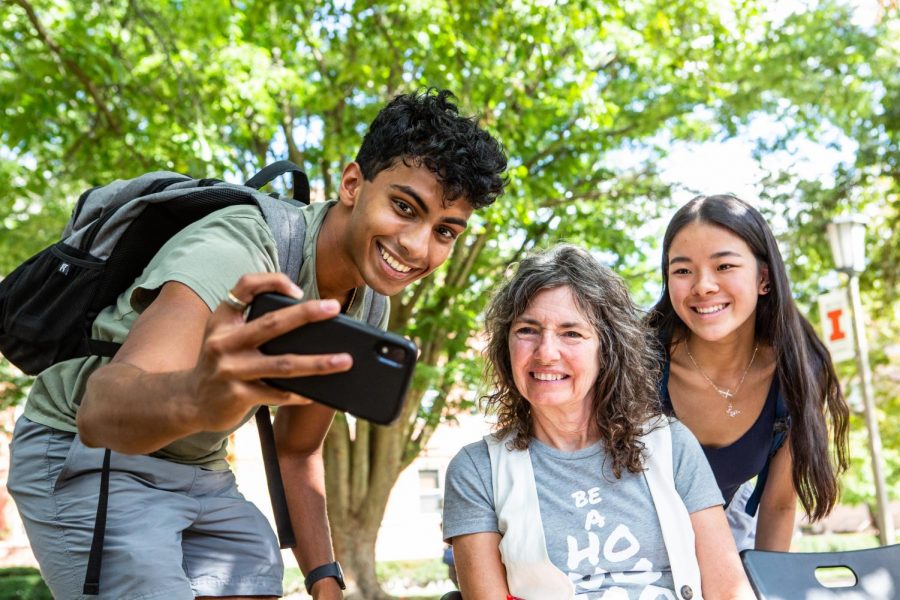 Sister Cindy poses for a photo with two Illinois students on the Main Quad on Sept. 8. Multiple preachers have been traveling to college campuses across the country to share their beliefs.

A woman stood rambling in the middle of a circle of student onlookers on Sept. 8. Several onlookers said her words were nothing but mindless, derogatory slut shaming. In response, students flipped the bird and smoked pot in direct defiance.

This was a stop on Cynthia D. Lasseter Smock’s (famously known as Sister Cindy on social media) “Slut Shaming Show.” Since the start of the pandemic, preachers have increasingly taken to central campus locations to caution students about what they say are sinful acts.

However, students in attendance said they don’t leave with a new appreciation for God. Instead, they said the gatherings are a form of unconventional entertainment.

“I think it is kind of funny,” Morady said. “I don’t really care, this is just more entertainment.”

Several students shared Morady’s take on the embarrassing scene. Jona Elam, sophomore in LAS, was not concerned about the verbiage Sister Cindy used. However, she said the student reaction was insightful to a broader climate of online preaching.

“I’m Jewish, so theologically I don’t agree with this,” Elam said. “I think it is really remarkable how much of a reaction she gets from people, as much I don’t think she is effective or conceiving of her views. She’s notorious on TikTok at this point.”

Elam connected this event in the movement of younger people away from organized religion and said she believed the crowd that gathered was in disagreement with her rhetoric.

Brother Mitch, volunteer of Campus Ministry USA, said he came 89 miles from his home in Indiana to help facilitate the “Slut Shaming Show.” He said preaching on campuses is vital to spreading the gospel of God because young adults will determine the future of religion in America.

“We are following the basic command of Jesus,” Mitch said. “College age is quite the perfect age because these are our future nation’s leaders in all spheres of society. Whether it be economics, government, science, technology, entertainment, etc. We are seeking to win the lost, that they might be disciplined and catch a vision for their lives, and the nation’s.”

Mitch specifically said the University’s LGBTQ+ community is an example of widespread sin and warned of dire consequences.

“They need to be afraid,” Mitch said. “God does not bear his sword in vain. Whether it is a gay person, a drug addict, a thief, a liar, a shop lifter, an adulterer, all sin is bad and will be punished eventually.”

Other preachers on campus said they agree with these beliefs. This is the case for David Ramirez, a missionary from Arizona who said he traveled to C-U to spread his divine wisdom.

With all this occurring in such close proximity to the student body, many students think the University should take action. Robin Kaler, associate chancellor for Public Affairs at the University, said the University legally can’t do anything.

“We are a public university,” Kaler said. “So most of our outdoor spaces are accessible to the general public as long as they follow any relevant policies such as the Quadrangle Noise and Demonstration and Protests policies. The First Amendment of the U.S. Constitution provides strong protections related to the content of speech and expression. As always, when students, faculty and staff feel threatened by others, they can access the Bias Assessment and Response Team’s reporting process.”

The University is home to many students who identify as members of the LGBTQ+ community, many who feel uncomfortable with much of the rhetoric used by such preachers. Jonathan Gossett, sophomore in LAS, is a member of the community and shared his reactionary thoughts to the practices by campus preachers.

“While I completely respect preachers and anyone who wants to practice and share their religious beliefs, I believe that using such beliefs in a negative connotation isn’t right,” Gossett said. “Regarding the surge of preachers and other religious affiliated people on campus, it is frustrating, but also of no surprise to me.”

Gosset went on to highlight the politically divisive times of today and that religion does play a role in such.

However, their rhetoric is not just targeted at the LGBTQ+ community. It mostly targets women, identifying them as the primary sinners.

Mikayla Brechon, senior ambassador for CHAARG, a women’s athletic and empowerment group, witnessed such rhetoric and expressed her disdain.

“It’s obviously upsetting to us,” Brechon said. “All that we are about is pro women, and to have a group behind us kind of limiting our voices and our rights, our bodies, a choice to do what we want with it, goes against what we are saying.”

The preachers are not found just on the quad, but rather all over Campustown in what they said are sinful environments.

On Sept. 4, individuals wearing black T-shirts spoke to partying students gathered outside of The Red Lion from across the street about engaging in prayer.

These individuals are members of Jesus Illinois, a group that encompasses several local churches with a goal to spread their gospel.

Ali Samani, sophomore in LAS, partied his Friday night away with fellow actuarial science majors in the Murphy’s basement. He shared his take on the negative rhetoric being thrown by preachers toward partiers like him.

“I think these types of preachers got the wrong idea,” Samani said. “I don’t think they know what they are talking about, and it’s safe to say that they haven’t been to the parties themselves. I don’t think there is a problem with kids trying to have fun, however that may be. That’s kind of the point of college.”