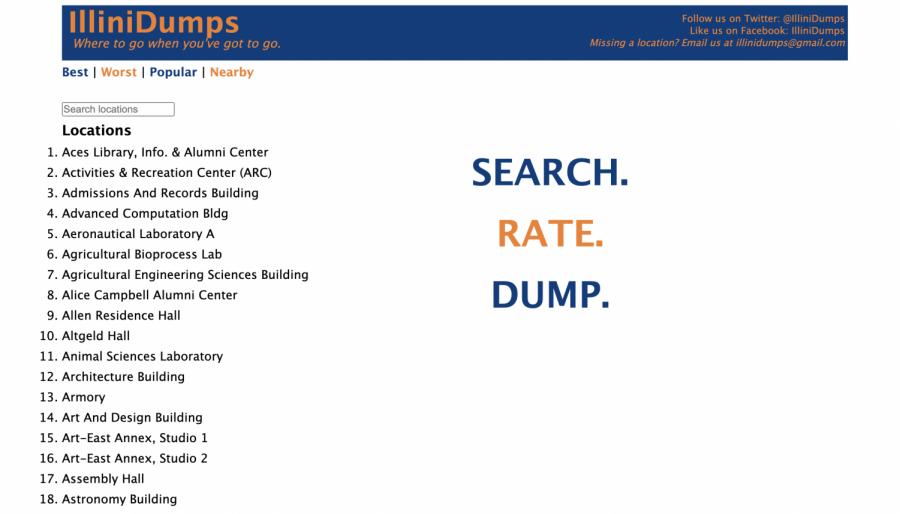 A screenshot of the website “Illini Dumps” is shown above. The site ranks the worst bathrooms on campus.

The Illini Union stands as a beautiful landmark of the University. With a fascinating architectural history, it can host hundreds of students and provides great study environments and services like Starbucks.

Alas, one of the most useful services provided to the student body is the restrooms on the southern side of the building, a crucial public facility for students rushing across the quad during a chaotic school day. Dane Pongos, junior in LAS, walked out of the Union bathroom with a positive attitude about its cleanliness.

“It was clean enough for my standards,” Pongos said. “I was able to use it with no issues. It wasn’t bad enough for me to avoid it.”

At the University, there is a place to share opinions like these. The student body has made the knowledge public on the Illini Dumps website, which has turned 10 years old this September.

Illini Dumps is a public polling website for students to vote on the cleanliness of various public bathroom facilities on campus. From the Illini Union to the Ice Arena, the service lists 133 toilets in order of popularity. The reigning best toilets are the ones found in the ACES Library, Information & Alumni Center, and the worst are in the Wood Engineering Laboratory.

Sid Sethupathi is the mastermind behind the website. As engineering student who graduated in 2015, Sethupathi has continued to keep the domain of this unique passion project up and running for more than 10 years.

During his freshman year in 2011, Sethupathi’s friend was using the bathroom at the Forbes Natural History Building very late at night and decided at that moment, he needed a better option. The two knew where the good bathrooms were on campus but decided to share the knowledge. After some searching, Sethupathi found that Facilities & Services published a list of all the buildings with toilets on campus, so he scraped the site for the names, addresses and photos of each building. The code was written in just a couple of weeks.

The first version of the site was hosted by another student Sethupathi met on an old University Internet Relay Chat channel. When the two came back on campus the following January, they officially launched, with flyers taped inside all the dorm stalls to promote it.

“Reception was good!” Sethupathi said in a Reddit chat. “I think we had (about) 1000 votes in the first semester alone. Facilities and Services actually emailed us in March 2012 to see if we’d promote a bathroom remodel survey they were doing.”

The site’s popularity eventually led UI7 to do a piece on the site in 2012. As the years went on, thousands of votes were cast in ranking the toilets on campus, with at one point an active comment section where debates on the quality of bathrooms in the residence halls took place. They have since been disabled, but Sethupathi continues to support the site.

“It was sort of a joke when we launched, though we did consider the possibility of expanding to other universities,” Sethupathi said. “I haven’t really done much on the site since we graduated, but we still renew the domain and keep it running since I think it’s a fun memory. Every once in a while, there’s a post on Reddit about bathrooms on campus and someone always posts a link.”

With the 10th anniversary passing, Sethupathi wanted to advise new and current students that if they have a fun idea while they are in school, they should pursue it, even if it’s something ridiculous like making a website that curates bathrooms on campus.

“It’s cool to be part of UIUC lore,” Sethupathi said.