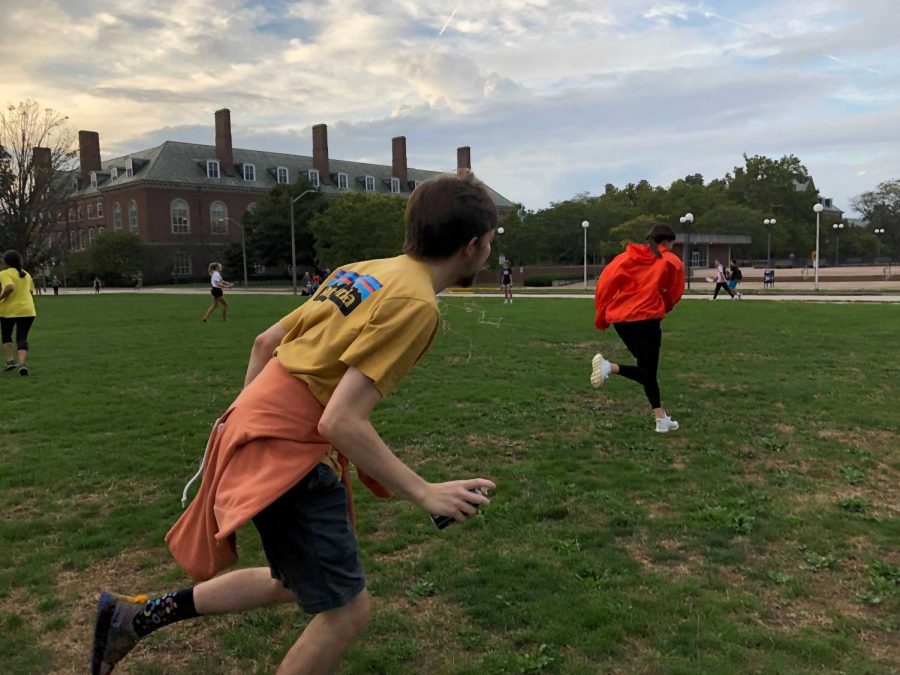 Students run around on the South Quad spraying silly string as they play capture the flag on Wednesday. This was one of many activities students could participate in for homecoming week.

The Color Wars battle of the South Quad went down Wednesday. Despite a rainy forecast, dozens of students participated in the event hosted by the Student Alumni Ambassadors group to celebrate Homecoming Week. The battle consisted of multiple teams of color-coded students playing capture the flag across the South Quad, shooting each other with silly string canisters.

Promoted on the University’s popular subreddit r/UIUC, the gathering attracted members of various RSOs. Jack Kelleher, junior in Business, came to the battle with his friends from Business Council.

“They put it on our calendar, and I signed up,” Kelleher said. “We have a team of seven, and we’re gonna dominate.”

Kourtney Cordes, senior in ACES, came with members of EAT4Health.

“I didn’t really know what this event was,” Cordes said. “I just wanted to do more with my club.”

The battle had members position their flags on opposite sides of the field, and at the game’s commencement, they charged forward with canisters of silly string acting as firearms. Spraying other students put them in jail, needing another teammate to tag them out. As the game progressed, the conflict grew more extreme as several students slid to dodge oncoming fire and climbed trees to hide their flags in unobtainable positions.

Naomi Popoolapade, junior in LAS, was the main organizer of the event. The team behind it laid out dozens of color-coded canisters for silly string, providing seemingly unlimited ammo for participants. The rain that showered before the event almost canceled it outright, but the team persisted and concluded it with a clear dusk sky (and lots of mud).

“It’s going pretty well,” Popoolapade said, “I think a lot of people are having a lot of fun, and people are using the silly string as intended.”

The battle persisted throughout the hour, and much laughter was had among the students participating. Silly string got everywhere, and student referees helped clean up the event’s aftermath.

Natalie Meier, sophomore in Media, came along with the Business Council students and left with a positive attitude.

“It’s a great way to get active and spread some homecoming spirit,” Meier said. “You know, last year we didn’t have events like this, so it’s really nice to have all these events back in person.”