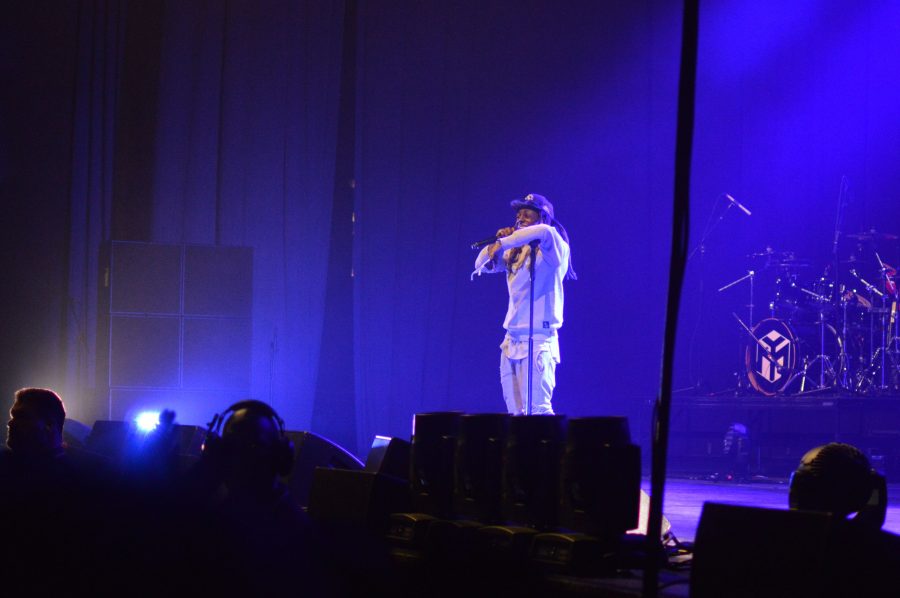 Lil Wayne was not a “Sucker for Pain” during his Thursday night performance.

He has been active in the music industry for twenty years, from his Hot Boys days in ‘96 to the release of “Tha Carter III” in 2008, to his endless string of songs with Drake from 2010 until now.

It is with this iconic catalog of music that he graces stages, and Thursday night was the State Farm Center’s turn to spotlight the rapper. He came through the Champaign arena as part of his one-month “Campus Crush” tour, with openers Cyhi The Prynce, a rapper from Stone Mountain, Georgia, and Bas, a rapper from Queens, New York.

Right away, the New Orleans born-and-raised rapper gave a three-point list to tell the crowd what he is about.

Wayne, whose real name is Dwayne Michael Carter Jr., builds his set around his appreciation for his fans. The diverse audience sang along as he did a mix of solo tracks and guest features from his lengthy career, all of which are his defined hits.

The rapper is set to release “Tha Carter V” and “Funeral” in the future. Neither album has a set release date.

The crowd enjoyed his old music as well as his new songs. Wayne’s smooth-staple “Ms. Officer” got just as big of a reaction as his guest verse on “No Problem” by Chicago native, Chance The Rapper.

Although Wayne has the stage presence and star power to put on a solid show, Thursday was not without its hiccups.

Wayne’s show ran for about an hour. There was a palpable sense of disappointment among the crowd as he announced his last song. For someone who’s been doing this as long as Mr. Carter, he definitely has the track-record to go strong for at least another hour and a half or two.

Wayne himself rocked the stage for roughly 50 minutes of that hour. He took a break from performing two-thirds into the show, and instead let a string of young rappers from Louisiana, Texas and New York perform their own tracks. A gracious move for sure for an artist of his curated talent, but probably not what the State Farm Center crowd was expecting or wanted.

The mixing of Wayne’s vocals and the combo of his DJ and live drummer became a bit muddy sometimes. Wayne has a raspy, piercing tone and voice that can usually cut through even his most booming beats. At times the sound felt a little congested and hard to hear clearly.

Despite some setbacks, Wayne rapped like his life depended on it. He performed with the same fuel that won him four Grammys, four platinum albums and multiple sold-out tours.

Lil Wayne stuck to his roots and performed the way he has been for his entire career.