ILLIAC computer produces music on its own, integrates music, math 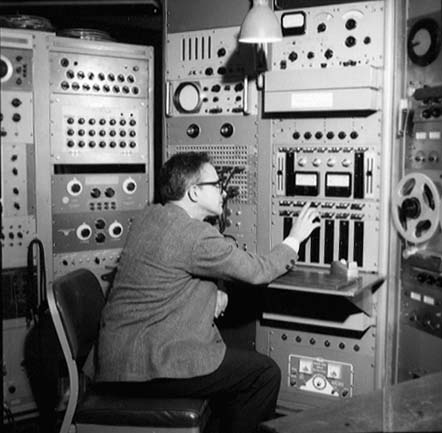 For all the spellbinding thrill it can weave within its veil of apparent unpredictability, music depends on plain old math.

Musicians might tune their instruments to a standard pitch for a fuller sound, or an architect may design the walls of a concert hall to match a certain reverberation. A composer can even divide a measure into four easily digestible beats for audiences to clap on the second and fourth.

Lejaren Hiller wasn’t the first person to notice this relationship between music and math. He boiled the former down to its bare bones in a way no one had seen before. Hiller asked himself, “What if you could order a list of musical possibilities such that it could be read by something that only understands numbers?”

James Bohn, music technology program director at Stonehill College, said in a modern sense, the equipment Hiller had to get by with wasn’t actually much.

“It wasn’t like (computers) today where you just sit down and start using it,” Bohn said.

The Illinois Automatic Computer, or ILLIAC, now known as the ILLIAC I, was a state-of-the-art computational tool envied by many professionals in Hiller’s day. According to a text written by Scott Schwartz and Nollan Valier and sourced by the University’s Sousa Archives and Center for American Music, the computer was composed of 2,800 vacuum tubes, enabling it to perform thousands of intricate calculations in only seconds.

Telling the ILLIAC I what to do was far from easy for Hillard. The machine was large, sprawling from the floor to the ceiling without a screen or keyboard in sight.

Most people weren’t even allowed to get near the ILLIAC I. Unless they had authorized access to the computer, users would need to hand in a piece of tape with desired calculations to an operator, who would feed the tape into the system and return the printed results by the next day.

Sever Tipei, professor of composition-theory and manager of the Computer Music Project, notes the potential of engineering has made a lot of ground since the `50s.

Hiller knew he didn’t have the resources to teach music theory to the ILLIAC I, let alone the time. Still, he sought a solution that would allow the computer to fill in some challenging blanks to his problem.

Hiller had experience as a research chemist and came to the University as a chemistry professor and research associate.

By the time the concept of “computer music” sprung into his mind, he had already been using the ILLIAC I to approximate the size of tiny molecules with the aid of programmer Leonard Isaacson.

Being a composer himself, Hiller couldn’t keep the right side of his brain from getting the best of the left.

Taking after French composer Iannis Xenakis, who modeled his work under mathematical principles such as stochastic distribution, Hiller theorized the ILLIAC I could be programmed to recognize the 14 keys within two octaves of a piano as integers. Hiller repeatedly called on the computer to randomly generate one of these 14 notes, which he then stuck to the end of the machine’s growing output.

In algorithmic lingo, Hiller observed the Monte Carlo method, a mathematical process that involves randomly plucking a string of outcomes from a cycle of possibilities.

Of course, for coherency’s sake, Hiller needed to define some boundaries before his testing took place.

In Hiller’s case, the notes spat out by the ILLIAC couldn’t be blindly accepted. Beginning the project in 1956 with Isaacson as an assistant, Hiller either approved of or dismissed the computer’s results based on stipulations of counterpoint, or the set of rules determining what notes should sound “good” together.

As explained in his article, “Computer Music,” for Scientific American, Hiller felt the overbearing issue with the process concerned the proper balance between “chaos and monotony.” If he took too much control over the ILLIAC, the originality might have drained from the piece. If he took too little, the composition might unfold into a messy puddle of disorganized sound.

“The whole idea in experimental music is that you don’t really have a precise goal or a certain result,” Tipei said. “It’s just a broad idea, and then you accept the result if it’s consistent with the premises.”

Once the final ILLIAC Suite was performed by a string quartet in front of the Illini Union on Aug. 9, 1956, the public was willing to take a trip into the unknown as well; highly publicized, the concert event made it to headlines in magazines such as Newsweek and Time.

Reviews weren’t exactly positive regarding the artistic validity of the work, but it wasn’t so much the musical quality that launched the ILLIAC Suite into the national eye as much as the doorway it offered to the alluring world of electronics.

“In the 1950s, the public had only a very basic idea of what a computer was and what it really did,” Bohn said. “Their ideas of what these things were fed by science fiction and a press that didn’t really understand computers. (The ILLIAC Suite performance) was kind of a good ‘gee whiz’ moment about what the possibilities of these new machines were.”

It was a craving for further exploration that drove Hiller to establish the Experimental Music Studio in 1958. According to the Sousa Archives, the meager $8,000 allotment dealt by the University to the music experimentation department didn’t keep the studio from finding the resources it needed. Hiller managed to scavenge a good handful of materials around campus for free.

Sixty years later, education in electroacoustic arts still echoes much of Hiller’s vision. Tipei oversees the several ongoing projects within the program, including the Digital Instrument for Sound Synthesis and Composition, a software used to simultaneously compose and synthesize tracks, and Music 4C, aimed toward enhancing computer score.

For the technological heights to which the program has climbed, Tipei has never forgotten to pay the ILLIAC Suite its due in his classroom.

“Well, that’s just the beginning,” Tipei said. “I tell (my students) that’s where we started.”

That’s where computers become interesting. They can produce something that you haven’t thought of before.